Townsend is a city in Blount County, Tennessee, in the southeastern United States. The population was 244 at the 2000 census and 448 at the 2010 census.[6] For thousands of years a site of Native American occupation by varying cultures, Townsend is one of three "gateways" to the Great Smoky Mountains National Park. It has several museums and attractions relating to the natural and human history of the Great Smokies.

Identifying as "The Peaceful Side of the Smokies", Townsend has the least traffic of the three main entrances to the national park. The park's other two entrances – one just south of Gatlinburg, Tennessee, and the other just north of Cherokee, North Carolina – are home to multiple commercial attractions that draw millions of tourists annually. Townsend is low-key, with a handful of inexpensive restaurants and motels and several businesses geared toward outdoor sports, and a world-renowned horse show.

Native Americans were the first inhabitants of Tuckaleechee Cove on the Little River; the oldest archaeological finds in the cove date to 2000 B.C. A number of pottery fragments and ax heads dating to the Woodland period have also been found. By 1200 A.D., Tuckaleechee's Native American inhabitants had built a fortified village near the cove's northern entrance.[7] 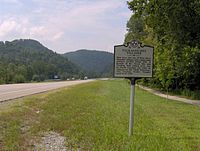 The Cherokee arrived in the area around 1600, and built a series of small villages along Little River. The name "Tuckaleechee" is from the Cherokee Tikwalitsi, and its original meaning is unknown.[8] A branch of the Great Indian Warpath forked at this site, with one branch heading west to the Overhill towns along the Little Tennessee River and another heading south to North Carolina.[9] 19th-century anthropologist James Mooney recounted an attempted raid on the Cherokee villages in Tuckaleechee by the Shawano (Shawnee) in the mid-18th century. The raid was thwarted when a Cherokee conjurer named Deadwood Lighter envisioned the position of the Shawano ambush. The Cherokee surprised the raiders from the rear, killing many of them and chasing the rest back over the crest of the Smokies.[10]

By the time the first Euro-American settlers arrived in Tuckaleechee in the late 18th century, the Cherokee had abandoned these villages. They moved south and west to evade encroachment by the colonists.[9]

In 1843, humorist George Washington Harris published an account of a country dance held that year in Tuckaleechee ("Tuck-a-lucky") Cove on the farm of "Capt. Dillon." Moonshine, cornbread, eggs and ham were served, and revelers danced to music provided by a fiddle-and-dulcimer duo. To win dance partners, the men engaged in a display of "feats of strength", while the women quilted.[11]

The exiled Irish patriot and Young Irelander John Mitchel lived and farmed here with his family for some years in the late 1850s. A Tennessee Historical Commission marker dedicated to him is located near the intersection of US 321 and SR 73.

In the 1880s, the lumber industry experienced a boom, aided by two key innovations – the bandsaw and the logging railroad. Flatland forest resources in the Ohio Valley and along the Mississippi Delta were quickly exhausted by the high demand for wood for fuel for steamboats. Logging firms began turning to the untapped resources of more mountainous areas.[12] 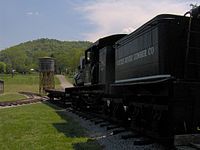 In 1900, hoping to capitalize on the near virgin forests of the Smokies, Colonel W.B. Townsend of Lancaster County, Pennsylvania purchased 86,000 acres (350 km2) of land along the Little River, stretching from Tuckaleechee Cove all the way to Clingmans Dome. The following year, Townsend incorporated the Little River Lumber Company. The community that developed around his bandsaw mill in Tuckaleechee became named after him. Townsend also incorporated the Little River Railroad to both transport the wood products to market, as well as (after about 1909) tourists escaping the summer heat of Knoxville to a resort town he developed in the cleared land, Elkmont. The railroad connected the sawmill with Walland to the west, and followed the Little River upstream to the southeast (Elkmont being about 5 miles from Clingman's Dome and near the Little River's headwaters).[12]

Townsend quickly profited from the forests of the Little River bottomlands. In 1916, he reported that Little River Lumber's consistently high rate of planks per acre showed no sign of decline. A single giant chestnut tree in the Smokies could yield 18,000 planks of lumber. Townsend's success led to a rapid expansion of logging operations throughout the Smokies.[12] By the time the park was formed in the 1930s, nearly two-thirds of area forests had been cut down, and park managers have worked to restore the forests.[13]

The rapid destruction of the forests of southern Appalachia led to increased efforts by conservationists to slow or halt logging operations. Col. Townsend initially opposed the effort, but after some wavering, sold at base price 76,000 acres (310 km2) of his Little River Lumber tract in 1926 to what would eventually become the Great Smoky Mountains National Park.[14] Townsend lived near Elkmont in a now-historic Swiss-style chalet he called Spindle Top, where he would die in 1936.[15] Although some predicted that the loss of the lumber industry would doom Tuckaleechee, the explosion in tourism as a result of the park's founding contributed to the area economy, keeping it relatively healthy,[16] even though the first resort hotel (Appalachian Club) burned in 1932 (and was restored) and the other, the historic Wonderland Hotel at Elkmont collapsed in 2005 and arson destroyed the remainder (and some historic cottages) in 2017.[17]

Other limestone windows in the area include Cades Cove, Wear Cove, and Jones Cove. Tuckaleechee Cove is situated between Bates Mountain to the north and Rich Mountain to the south, with the cove's greater population estimated at around 1,500. The Little River, its source high in the mountains on the north slopes of Clingmans Dome,[20] slices east-to-west through Tuckaleechee and drains much of the cove. The city of Townsend dominates the eastern half of Tuckaleechee.

According to the United States Census Bureau, the city has a total area of 2.2 square miles (5.6 km2), all land.[6] As of 2004, annexation had considerably increased the size of the town to its current size. Townsend is included in the Knoxville Metropolitan Statistical Area. 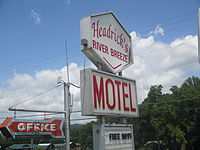 Headrick's River Breeze Motel, which opened in 1979 and remains operational

There were 124 households, out of which 15.3% had children under the age of 18 living with them, 58.9% were married couples living together, 3.2% had a female householder with no husband present, and 34.7% were non-families. 33.1% of all households were made up of individuals, and 23.4% had someone living alone who was 65 years of age or older. The average household size was 1.97 and the average family size was 2.44.

U.S. 321, also known as Lamar Alexander Parkway and Wears Valley Road, is the main highway connecting Townsend with Walland (and eventually Maryville) to the northwest and Pigeon Forge (via Wears Valley) to the east-northeast, where it intersects U.S. 441. Near the eastern end of Townsend, U.S. 321 tees north and then curves northeast, while Tennessee 73 continues straight and then turns southeast and heads straight into the national park. This road eventually intersects Little River Road at a popular swimming area known as "The Y". From this intersection, Cades Cove is 7 miles (11 km) to the west, and the Sugarlands and Gatlinburg are roughly 18 miles (29 km) to the east.

Townsend is home to the Great Smoky Mountains Heritage Center, which preserves various aspects of the region's history, and the Little River Railroad and Lumber Company Museum, which recounts the area's logging history. Next to the heritage center is the new National Park Service Collections Preservation Center, which archives items from all of the national park units in the area (though not open to the public). Tuckaleechee Caverns – a mile-long cave system that reaches depths of up to 150 feet (46 m) – is also nearby.

Just to the north and west of Townsend, the Foothills Parkway is a national parkway that traverses Chilhowee Mountain and offers multiple scenic overlooks at high elevations, with views of the Smokies to the south and the Tennessee Valley and Cumberland Plateau to the north and west. As of 2016[update], road construction on the parkway to complete the "missing link" from Walland to Wears Valley can be seen from Townsend during the mid-day and afternoon. This section eventually opened in late 2018, more than half a century after the first section opened in 1966.

Retrieved from "http://en.turkcewiki.org/w/index.php?title=Townsend,_Tennessee&oldid=1012240353"
This website is a mirror of Wikipedia, and is not affiliated with the Wikimedia Foundation.
Categories:
Hidden categories: