Jump to navigation Jump to search
This article is about the English newspaper. For the Tamil newspaper, see The Hindu (Tamil). For the religion, see Hinduism. For other uses, see The Hindu (disambiguation).
English-language newspaper in India

The Hindu is an English-language daily newspaper owned by The Hindu Group, headquartered in Chennai, Tamil Nadu, India. It began as a weekly in 1878 and became a daily in 1889.[3] It is one of the Indian newspapers of record[4][5] and the second most circulated English-language newspaper in India, after The Times of India. As of March 2018, The Hindu is published from 21 locations across 11 states of India.[6]

The Hindu was founded in Madras on 20 September 1878 as a weekly newspaper, by what was known then as the Triplicane Six consisting of four law students and two teachers:- T. T. Rangacharya, P. V. Rangacharya, D. Kesava Rao Pantulu and N. Subba Rao Pantulu, led by G. Subramania Iyer (a school teacher from Tanjore district) and M. Veeraraghavacharyar, a lecturer at Pachaiyappa's College.[7] Started in order to support the campaign of Sir T. Muthuswamy Iyer for a judgeship at the Madras High Court and to counter the campaign against him carried out by the Anglo-Indian press, The Hindu was one of the newspapers of the period established to protest the policies of the British Raj. About 100 copies of the inaugural issue were printed at Srinidhi Press, Georgetown, on one rupee and twelve annas of borrowed money. Subramania Iyer became the first editor and Veera Raghavacharya, the first managing director of the newspaper.[citation needed]

The paper was initially printed from Srinidhi Press but later moved to Scottish Press, then to The Hindu Press, Mylapore. Started as a weekly newspaper, the paper became a tri-weekly in 1883 and an evening daily in 1889. A single copy of the newspaper was priced at four annas. The offices moved to rented premises at 100 Mount Road on 3 December 1883. The newspaper started printing at its own press there, named "The National Press," which was established on borrowed capital as public subscriptions were not forthcoming. The building itself became The Hindu's in 1892, after the Maharaja of Vizianagaram, Pusapati Ananda Gajapati Raju, gave The National Press a loan both for the building and to carry out needed expansion.[citation needed]

'Its editorial stances have earned it the nickname, the 'Maha Vishnu of Mount Road'.[8] "From the new address, 100 Mount Road, which was to remain The Hindu's home till 1939, there issued a quarto-size paper with a front-page full of advertisements—a practice that came to an end only in 1958 when it followed the lead of its idol, the pre-Thomson Times [London]—and three back pages also at the service of the advertiser. In between, there were more views than news."[9] After 1887, when the annual session of Indian National Congress was held in Madras, the paper's coverage of national news increased significantly, and led to the paper becoming an evening daily starting 1 April 1889.[citation needed]

The partnership between Veeraraghavachariar and Subramania Iyer was dissolved in October 1898. Iyer quit the paper and Veeraraghavachariar became the sole owner and appointed C. Karunakara Menon the editor. However, The Hindu's adventurousness began to decline in the 1900s and so did its circulation, which was down to 800 copies when the sole proprietor decided to sell out. The purchaser was The Hindu's Legal Adviser from 1895, S. Kasturi Ranga Iyengar,[10] a politically ambitious lawyer who had migrated from a Kumbakonam village to practise in Coimbatore and from thence to Madras.[citation needed] Iyengar's son, Kasturi Srinivasan, became managing editor of The Hindu upon his father's death in 1923 and Chief Editor in February 1934. The Kasturi family, descendants of Kasturi Ranga Iyengar, have since owned and, through most of the paper's life, held the top editorial positions in the company.

In the late 1985s, when its ownership passed into the hands of the family's younger members, a change[citation needed] in political leaning was observed. Worldpress.org lists The Hindu as a left-leaning independent newspaper.[11] Joint managing director N. Murali said in July 2003, "It is true that our readers have been complaining that some of our reports are partial and lack objectivity. But it also depends on reader beliefs."[12] N. Ram was appointed on 27 June 2003 as its editor-in-chief with a mandate to "improve the structures and other mechanisms to uphold and strengthen quality and objectivity in news reports and opinion pieces", authorised to "restructure the editorial framework and functions in line with the competitive environment".[13] On 3 and 23 September 2003, the reader's letters column carried responses from readers saying the editorial was biased.[14][15] An editorial in August 2003 observed that the newspaper was affected by the 'editorialising as news reporting' virus, and expressed a determination to buck the trend, restore the professionally sound lines of demarcation, and strengthen objectivity and factuality in its coverage.[16]

In 1987–88, The Hindu's coverage of the Bofors arms deal scandal, a series of document-backed exclusives, set the terms of the national political discourse on this subject.[17] The Bofors scandal broke in April 1987 with Swedish Radio alleging that bribes had been paid to top Indian political leaders, officials and Army officers in return for the Swedish arms manufacturing company winning a hefty contract with the Government of India for the purchase of 155 mm howitzers. During a six-month period, the newspaper published scores of copies of original papers that documented the secret payments, amounting to $50 million, into Swiss bank accounts, the agreements behind the payments, communications relating to the payments and the crisis response, and other material. The investigation was led by a part-time correspondent of The Hindu, Chitra Subramaniam, reporting from Geneva, and was supported by Ram in Chennai. The scandal was a major embarrassment to the party in power at the centre, the Indian National Congress, and its leader Prime Minister Rajiv Gandhi. The paper's editorial accused the Prime Minister of being party to massive fraud and cover-up.[18]

In 2003, the Jayalalitha government of the state of Tamil Nadu, of which Chennai is the capital, filed cases against The Hindu for breach of privilege of the state legislative body. The move was perceived as a government's assault on freedom of the press. The paper garnered support from the journalistic community.[20]

In 2010, The Indian Express reported a dispute within the publisher of The Hindu regarding the retirement age of the person working as the editor-in-chief, a post which was then being served by N. Ram. Following this report, Ram decided to sue The Indian Express for defamation, a charge which the Indian Express denied. N. Ravi and Malini Parthasarathy voiced concern about Ram's decision, saying that doing so goes against The Hindu’s values and that journalists shouldn’t fear “scrutiny”, respectively.[21] During subsequent events, Parthasarathy tweeted that “issues relating to management of newspaper have come to the surface, including editorial direction” in her response to a question. Later, Parthasarathy called N. Ram and other The Hindu employees “stalinists”, alleging that they were trying to oust her from the newspaper.[22][23]

In 2011, during the resignation of N. Ram, the newspaper became the subject of a succession battle between the members of the Kasturi family. Ram had appointed Siddharth Varadarajan as his successor as the editor-in-chief of the newspaper who justified the appointment on the ostensible basis of separation of ownership and management, which was opposed by N. Ravi as it deviated from the publication's tradition of family members retaining editorial control over it.[24] Varadarajan was subsequently accused by the dissident family members of being left leaning and the matter of Varadarajan's appointment was brought in front of the board of directors of the parent company, Kasturi & Sons. During the dispute, Narasimhan Murali alleged that N. Ram ran The Hindu “like a banana republic, with cronyism and vested interests ruling the roost”. In the end the board voted 6–6 over a review of the appointment, the tie was broken by a deciding vote from Ram in his capacity as the chairman of the company and in favor of his decision.[22]

In 2012, The Hindu became the only Indian newspaper to appoint a Readers Editor, an independent internal news ombudsman.[25]

On 2 April 2013 The Hindu started "The Hindu in School" with S. Shivakumar as editor. This is a new edition for young readers, to be distributed through schools as part of The Hindu's "Newspaper in Education" programme. It covers the day's important news developments, features, sports, and regional news.[26] On 16 September 2013, The Hindu group launched its Tamil edition with K. Ashokan as editor.[27]

On 21 October 2013, changes have been made in Editorial as well as business of The Hindu.[28] N. Ravi took over as Editor-in-chief of The Hindu and Malini Parthasarathy as Editor of The Hindu. As a consequence, Siddarth Varadarajan submitted his resignation. N. Ram has become Chairman of Kasturi & Sons Limited and Publisher of The Hindu and Group publications; and N. Murali, Co-Chairman of the company.

During the 2015 South Indian floods, for the first time since its founding in 1878, the newspaper did not publish a print edition in Chennai market on 2 December, as workers were unable to reach the press building.[29]

On 5 January 2016, Malini Parthasarathy, the Editor of the newspaper, resigned with immediate effect. It was reported by the media that she resigned her post, citing "general dissatisfaction" with her performance.[30][31] However, she continues to be a Wholetime Director of Kasturi & Sons Ltd.[31]

On October 7, 2019, The Hindu announced that "Two editorial meetings a month will be opened up to readers in order to expand conversations and build trust", a first in India's media industry.[32]

A 2014 article in the Indian Journal of Pharmacology praised The Hindu's ongoing journalism and critique of clinical trials in India.[34] 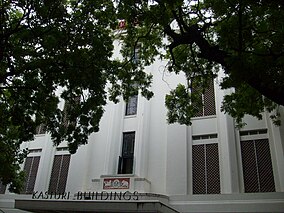 A close-up view of the entrance to Kasturi Buildings, the head office of The Hindu

The Hindu was the first newspaper in India to have a website, launched in 1995.[41]

Headquarters of The Hindu in Anna Salai, Chennai

In 1965, The Times listed The Hindu as one of the world's ten best newspapers. Discussing each of its choices in separate articles, The Times wrote: "The Hindu takes the general seriousness to lengths of severity... published in Madras, it is the only newspaper which in spite of being published only in a provincial capital is regularly and attentively read in Delhi. It is read not only as a distant and authoritative voice on national affairs but as an expression of the most liberal—and least provincial—southern attitudes... Its Delhi Bureau gives it outstanding political and economic dispatches and it carries regular and frequent reports from all state capitals, so giving more news from states, other than its own, than most newspapers in India... It might fairly be described as a national voice with a southern accent. The Hindu can claim to be the most respected paper in India."[18][43]

In 1968, the American Newspaper Publishers' Association awarded The Hindu its World Press Achievement Award. An extract from the citation reads: "Throughout nearly a century of its publication The Hindu has exerted wide influence not only in Madras but throughout India. Conservative in both tone and appearance, it has wide appeal to the English-speaking segment of the population and wide readership among government officials and business leaders... The Hindu has provided its readers a broad and balanced news coverage, enterprising reporting and a sober and thoughtful comment... It has provided its country a model of journalistic excellence... It has fought for a greater measure of humanity for India and its people... and has not confined itself to a narrow chauvinism. Its Correspondents stationed in the major capitals of the world furnish The Hindu with world-wide news coverage... For its championing of reason over emotion, for its dedication to principle even in the face of criticism and popular disapproval, for its confidence in the future, it has earned the respect of its community, its country, and the world."[18]

Retrieved from "http://en.turkcewiki.org/w/index.php?title=The_Hindu&oldid=1055729170"
This website is a mirror of Wikipedia, and is not affiliated with the Wikimedia Foundation.
Categories:
Hidden categories: