According to the International Equestrian Federation, "most equestrian authorities are of the opinion that tent-pegging originated in the Indian subcontinent during the middle ages in the battlefields as a tactics used by the horsed cavalry against elephant mounted troops"[3] A cavalier able to precisely stab the highly sensitive flesh behind an elephant's toenail would cause the enemy elephant to rear, unseat his mahout, and possibly run amok, breaking ranks and trampling infantry. The term "tent pegging" is certainly related to the idea that cavaliers mounting a surprise pre-dawn raid on an enemy camp could use the game's skills to sever or uproot tent pegs, thus collapsing the tents on their sleeping occupants and sowing havoc and terror in the camp. However, there are few reliable accounts of a cavalry squadron ever employing such tactics.

Since its formation the ITPF has organised several international competitions. 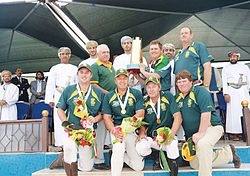 South Africa won the event by a total of 758.5 points and clinch the enviable honour of being the first world champions. Oman got second position with 693.5 points. Sudan, who finished with 654 points, took the third place.[17]

Retrieved from "http://en.turkcewiki.org/w/index.php?title=Tent_pegging&oldid=1067565553"
This website is a mirror of Wikipedia, and is not affiliated with the Wikimedia Foundation.
Categories:
Hidden categories: