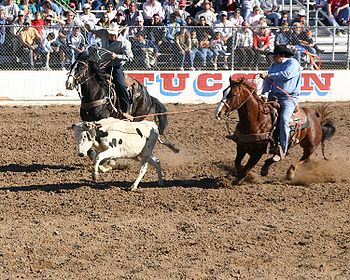 Team roping consists of two ropers; here, the header has roped the steer and is setting up to allow the heeler to rope the back legs of the steer.

Team roping also known as heading and heeling is a rodeo event that features a steer (typically a Corriente) and two mounted riders. The first roper is referred to as the "header", the person who ropes the front of the steer, usually around the horns, but it is also legal for the rope to go around the neck, or go around one horn and the nose resulting in what they call a "half head". Once the steer is caught by one of the three legal head catches, the header must dally (wrap the rope around the rubber covered saddle horn) and use his horse to turn the steer to the left.

The second roper is the "heeler", who ropes the steer by its hind feet after the "header" has turned the steer, with a five-second penalty assessed to the end time if only one leg is caught. Team roping is the only rodeo event where men and women compete equally together in professionally sanctioned competition, in both single-gender or mixed-gender teams.[1]

Cowboys originally developed this technique on working ranches when it was necessary to capture and restrain a full-grown animal that was too large to handle by a single man.[2] Over the years, as the sport has grown, a numbering system was added to rate each ropers individual talent level. The numbers go from one to ten (1-10) for headers and one to ten (1-10) for heelers. Using these numbers, a handicap system (the subtraction of time) has been developed to even the competition. Today there are tens of thousands of amateur ropers who compete for millions of dollars in prize money.[3] 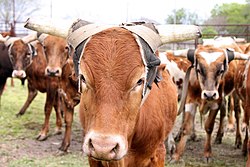 There is specialized equipment used by team ropers:

Steers used for roping are moved from a holding corral through a series of narrow alleyways that lead to the roping arena. The alleyways allow the steers to be lined up in single file. Then, one at a time, a steer is moved into a chute with spring-loaded doors in front and a solid gate behind, so that only one animal is released at a time. On each side of the chute is an area called the box that is big enough to hold a horse and rider. The header is on one side (usually the left, for a right-handed header) whose job is to rope the steer around the horns, then turn the steer so its hind legs can be roped by the "heeler", who starts from the box on the other side of the chute.[4]

Watch the header (right) rope the horns and pull the steer into position for heeler (left) to rope the hind legs.

A taut rope, called the barrier, runs in front of the header's box and is fastened to an easily released rope on the neck of the steer of a designated length, used to ensure that the steer gets a head start. An electronic barrier, consisting of an electric eye connected to a timing device, is sometimes used in place of the barrier rope.[5]

When the header is ready, he or she calls for the steer and an assistant pulls a lever, opening the chute doors. The freed steer breaks out running. When the steer reaches the end of the rope, the barrier releases. The header must rope the steer with one of three legal catches: a clean horn catch around both horns, a neck catch around the neck or a half-head catch around the neck and one horn. The header then takes a dally, a couple of wraps of the rope around the horn of the saddle. Some ropers have lost fingers in this event. Once the header has made the dally, the rider turns the horse, usually to the left, and the steer will follow, still running.[6]

The heeler waits until the header has turned the steer. When he or she has a clear throw, the heeler throws a loop of rope under the running steer's hind legs and catches them. As soon as the heeler also dallies tight, the header turns his or her horse to directly face the steer and heeler. Both horses back up slightly to stretch out the steer's hind legs, immobilizing the animal. As soon as the steer is stretched out, an official waves a flag and the time is taken. The steer is released and trots off. There is a 5-second penalty for roping only one hind leg and a 10-second penalty for breaking the barrier if both occur on the same run then the penalties are added together for a total of 15 seconds added.[7]

A successful professional-level team takes between 4 and 8 seconds to stretch the steer, depending on the length of the arena. At lower levels, a team may take longer, particularly if the heeler misses the first throw and has to try again. At higher levels, the header and the heeler are allowed only one throw each, if either misses, the team gets no score.[8]

In some round-robin format competitions the header and heeler are awarded points for each catch instead of timing the run. This puts emphasis on consistency rather than speed. These types of competitions are often more attractive to newer ropers where they can focus on catching rather than having a fast run.[9]

There are various organizations that sanction team roping events at local, regional and national levels. Some of the rules common to most groups include:

A modern rope is usually made of a blend of nylon and poly fibers, though some classic styles are still made of rawhide. Most synthetic ropes are generally quite stiff at the time of purchase, but come in various grades. For beginners, headers start with an extra soft (xs) or an extra, extra soft (xxs) rope. Heelers usually also start with a harder rope. Ropes come in a number of different variations of stiffness. from softest to stiffest there is the extra extra soft (xxs), extra soft (xs), soft (s), medium soft (ms), medium (m), hard medium (hm), and medium hard (mh).[11]

Steer is released from chute with a slight head start, horse and rider emerge from box when steer is a predetermined distance out

Headers swing their loops overhead in a smooth, flat motion, aim for the back of the steer's head and release the loop. When the roper releases, he or she is to stop the hand open, flat, and palm down at the point where the loop is thrown. Heelers use a different technique, a right-handed heeler will twirl the loop on the left side of the rider's body, always keeping the tip of the loop on the left side so that when the loop is thrown, it will go under the steer. Heeling is all about timing; the tip of the loop has to be at its lowest point as the steer's legs are coming forward. The lay of the loop is also very important; it should stand up against the steer's legs with the bottom loop on the ground so the steer will jump right into it.[12]

Retrieved from "http://en.turkcewiki.org/w/index.php?title=Team_roping&oldid=1082488901"
This website is a mirror of Wikipedia, and is not affiliated with the Wikimedia Foundation.
Categories:
Hidden categories: