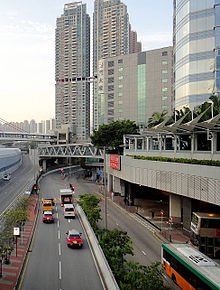 A view of Tai Kok Tsui 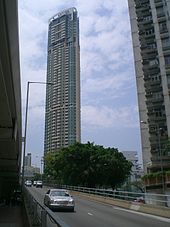 Until recently,[when?] many of the residents in Tai Kok Tsui were senior citizens but there has been a more recent influx of younger people, especially those returning to Hong Kong after time spent overseas. Traditionally the area has been known as one characterised by the presence of immigrants - often described as 'illegal immigrants' though this term is used rather intolerantly in Hong Kong and at times may describe people who are no such thing.[citation needed]

Before any reclamation, Tai Kok Tsui was geographically a long island of Hong Kong of granite linked by an isthmus at its north to Kowloon Peninsula. The long granite hill divided the reclamation in its east and dock area in the west in 1924. The tip of the cape hosted the Asia oil tanks. The area was mainly for dock facilities at this period as reflected in present-day Anchor Street. The Cosmopolitan Dock survived till the 1960s which is now Cosmopolitan Estate (大同新邨).

The Guangzhou–Shenzhen–Hong Kong Express Rail Link was built underneath Tai Kok Tsui. In January 2010, the local residents protested and said the railway would cause unbearable noise pollution to residents in some districts and could cause a number of old buildings with poor foundations to collapse.[1]

The Office for Safeguarding National Security of the CPG in the HKSAR plans to build its permanent office at Tai Kok Tsui.[2]

Island Harbourview (Chinese: 維港灣), completed in 1999, was the first private housing estate to be built in the newly reclaimed area, it is located next to Olympian City 1. There are 9 blocks in total which form an 'L' shape. Blocks 1, 2, 3, 5 and 6 faces east–west while blocks 7, 8, 9 and 10 face north–south. The estate has a clubhouse with many facilities such as a swimming pool and two badminton courts. It is located at 11 Hoi Fai Road, Tai Kok Tsui, but its car entrance is at Hoi Fan Road (near the intersection with Hoi Fai Road).

Central Park (Chinese: 帝柏海灣) is a private housing estate located in the area. It is one of the projects of MTR Olympic station Phase II and is built on the reclaimed land of the old Yau Ma Tei Typhoon Shelter.[3] Developed in 2001 by a consortium composed of MTR Corporation, Sino Land, Kerry Properties, Bank of China (Hong Kong) and China Overseas Land and Investment, it comprises 4 high-rise buildings (Block 1, 2, 3, 5) with a total of 1,344 units.[4][5]

Florient Rise (Chinese: 海桃灣), formerly Cherry Street Project (櫻桃街項目; jing1 tou4 gaai1 hong6 muk6)[8] is a private estate in Cherry Street. It was jointly developed by Nan Fung Group and Urban Renewal Authority (URA) in 2008, and construction was completed in May 2009. It comprises three blocks with a total of 522 units.[9][10]

There is a residential block called "Hoi Ming Court" in the middle of the site which was excluded from the redevelopment project due to its young age and high acquisition cost. Florient Rise was built around Hoi Ming Court.[11] 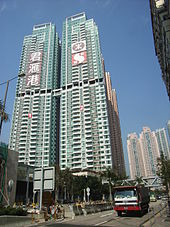 Harbour Green (Chinese: 君滙港) is a private estate and part of the Olympic station Phase III project. It comprises five 48 or 56 floors towers with a total of 1,514 units. It was jointly developed by Sun Hung Kai Properties and MTR Corporation and completed in 2007.[12] 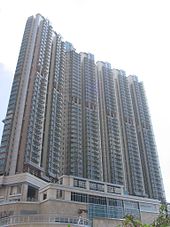 One Silversea (Chinese: 一號銀海) is a private estate located at the waterfront site of the former Tai Kok Tsui Temporary Bus Terminus, it was developed by Sino Land and completed in 2006.[14]

Shining Heights (Chinese: 亮賢居), at 83 Sycamore Street, was developed by Hong Kong Ferry (Holdings) Company Limited and its parent company, Henderson Land Development. It was formerly Hong Kong Ferry Staff Quarters[15][16] It comprises one tower with a total of 348 units, which was completed in 2009.[17]

The Hermitage (Chinese: 帝峯 · 皇殿) is a private estate located above the newly developed Olympian City 3 with 6 towers. Towers 1-3 are the 19th tallest building in Hong Kong.

The Hermitage is in Primary One Admission (POA) School Net 31.[6] Within the school net are multiple aided schools (operated independently but funded with government money) and Jordan Road Government Primary School.[7]

Hampton Place (Chinese: 凱帆軒) is a private estate located at No 11 Hoi Fan Road and Olympic station. It is composed of 3 blocks. The estate has a clubhouse with many facilities such as a swimming pool, spa, fishing area, BBQ, and cinema. There is also a 3-storey carpark. A 3-storey commercial building was later built and now accommodates a kindergarten and a medical centre.

Wikimedia Commons has media related to Tai Kok Tsui.
Retrieved from "http://en.turkcewiki.org/w/index.php?title=Tai_Kok_Tsui&oldid=1115921392"
This website is a mirror of Wikipedia, and is not affiliated with the Wikimedia Foundation.
Categories:
Hidden categories: