Since 2007, Tellier has served as national director of the Miss France Committee.

Tellier was born in Nantes to parents from Normandy. She was raised in Les Sables-d'Olonne, and grew up in a family of modest means.[1] After receiving a DEUG in law from the University of Nantes, Tellier moved to Lyon to attend Jean Moulin University Lyon 3. She ultimately graduated from the school with a master's degree in private law, specializing in business law and tax law.[2]

Tellier first began competing in pageantry in 1997, after being encouraged by the mother of her boyfriend at the time to compete in Miss Vendée 1997. She went on to win the title, which qualified her to compete in Miss Pays de la Loire 1997, a qualifying pageant for Miss France. Tellier went on to place as the first runner-up, behind winner Caroll Parfait.

Four years after winning Miss Vendée, Tellier opted to return to pageantry. Now residing in Lyon, Tellier competed in Miss Lyon 2001, where she won the title. As Miss Lyon, Tellier qualified directly for Miss France 2002. She later represented Lyon at the Miss France 2002 competition in Alsace, where she was crowned the winner. Following her win, she became the seventh woman representing the Rhône-Alpes region to win the title.[3]

As Miss France, Tellier became a nationwide representative of France. She later represented the country at Miss Universe 2002, where she was unplaced. Tellier completed her reign the following year, after crowning Corrine Coman of Guadeloupe as Miss France 2003.

Tellier joined the Miss France Committee in 2005, hired as the head of external relations. Two years later, after reorganization within Endemol France, Tellier was appointed national director of the Miss France Committee and head of the Miss Europe Organization, by Endemol France director Virginie Calmels. With her appointment, she succeeded Geneviève de Fontenay, who had served in the position for 20 years.[4] 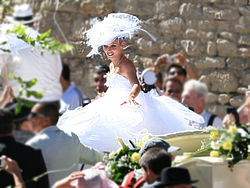 Tellier at her wedding in 2007

Retrieved from "http://en.turkcewiki.org/w/index.php?title=Sylvie_Tellier&oldid=1025845073"
This website is a mirror of Wikipedia, and is not affiliated with the Wikimedia Foundation.
Categories:
Hidden categories: