Sylva is an incorporated town located in central Jackson County, in the Plott Balsam Mountains of Western North Carolina, United States of America. As of the 2010 census, the town had a total population of 2,588.[5] It is the county seat,[6] having taken over from nearby Webster in 1913.

According to popular accounts, Sylva is named for William D. Sylva, a Danish handyman who spent a month in the home of General E. R. Hampton, who owned much of the land later developed as downtown Sylva. When the town applied for a post office, Hampton asked his young daughter Mae what the town's name should be. She liked the handyman so much she said, "Sylva."[7] This account is disputed: according to a 21st-century investigation, the handyman William D. Sylva was not Danish, and it is likely that his surname was not Sylva. His last name was "Selvey;" the letter that he wrote to the town was likely in Spanish, not Danish; and he was probably from the Little Canada Community. His daughter's maiden last name was Selvey according to genealogical archives. Her daughter (who recently came to the town) said that her grandfather's surname was "Selvey" instead.[8] 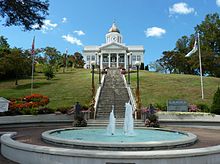 The town became the county seat in 1913 after the county voted to move the seat from Webster to Sylva, which gained a railroad station. Subsequently, Webster declined, as the railroad had not established a stop in that town. Many businesses followed the court and railroad to Sylva. The Jackson County Courthouse was constructed in 1914 and is sited dramatically on a hill at the end of Main Street in downtown Sylva. The building no longer serves as the official courthouse; the Justice Center was constructed in 1994 a few blocks away. Since 2011, the Jackson County Courthouse has been the site of the Jackson County Public Library.

Sylva claims that it once had Dills Falls, a 249-foot waterfall, making it the only town in the US that had a waterfall in town limits, until it was destroyed to build the Sylva bypass. However, the waterfall was only approximately 40 feet tall, and was never destroyed. Many towns in the US, and even North Carolina, have waterfalls in their town limits. The town had the first municipally owned swimming pool west of Asheville. The stone and concrete pool was built in 1938 by the WPA during the Great Depression; it was demolished in 1969 to be replaced by the current pool. Thomas Edison and Franklin D. Roosevelt both traveled through Sylva: Edison in 1911 and FDR in 1936 during his presidency.

According to the United States Census Bureau, the town has a total area of 3.2 square miles (8.3 km2), all of it land.

Sylva is close to the Cherokee Indian Reservation (the Eastern band) and the Great Smoky Mountains National Park, both of which are popular and well-known vacation spots. 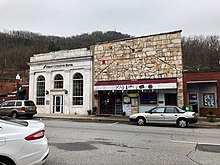 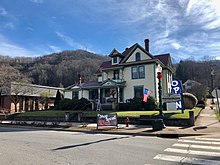 Sylva is home to the Jackson Campus of Southwestern Community College and is the closest town of size to nearby Western Carolina University (6 miles (9.7 km) away), one of the seventeen schools of the University of North Carolina system.

The Hook, Line & Drinker Festival takes place in May, celebrating the designation of the area as a popular spot for fishing, and features fly fishing guides, fishing industry vendors, craft beer vendors, children's activities and bands at Bridge Park.

Concerts on The Creek is an event that takes place every Friday night from Memorial Day to Labor Day at Sylva Bridge Park.

Several movies have been filmed in Sylva, including the 1972 movie Deliverance (along Mill Street), the 1997 movie Paradise Falls (also known as Carolina Low), and the 1993 blockbuster The Fugitive (at Harris Regional Hospital, a scene where the town is seen from Sylvan Heights right after the train wreck, and along Scotts Creek where it crosses West Main Street). The train wreck scene in The Fugitive was filmed 2 miles (3.2 km) west of Sylva in the town of Dillsboro. The scene of Harrison Ford walking on railroad tracks in an old tunnel was also close by in Cowee Tunnel. The town was also the site of filming for the 2017 film Three Billboards Outside Ebbing, Missouri.

Retrieved from "http://en.turkcewiki.org/w/index.php?title=Sylva,_North_Carolina&oldid=1038851479"
This website is a mirror of Wikipedia, and is not affiliated with the Wikimedia Foundation.
Categories:
Hidden categories: