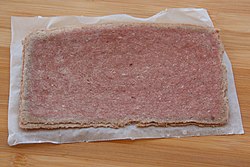 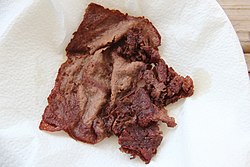 Steak-umm is an American brand of thin-sliced frozen steaks that is manufactured by The Steak-Umm Company, LLC. Steak-umms are sold in supermarkets throughout the United States and are used for making homemade Philadelphia-style cheesesteaks.[1] The company claims to be "the best-known sandwich steak brand in America" and to have "helped turn the regional 'Philly Cheese Steak' Sandwich into standard fare on America's dinner tables over four decades ago".[2] The company also produces ready-to-cook hamburger patties that are available in "Original" and "Sweet Onion" varieties.

Steak-Umm had been previously owned by Gagliardi Bros., H.J. Heinz (under the Ore-Ida brand), and Pomfret, Connecticut-based TriFoods International.[3] In 2006, Reading-based Quaker Maid Meats acquired the rights to the Steak-Umm brand name and associated intellectual property.[4] The purchase of the Steak-Umm brand by TriFoods is cited in a formative Business judgment rule judgement of a Delaware Chancery Court.[5]

The Steak-umm product was invented in 1968 by food technologist Eugene Gagliardi, who is also credited with inventing popcorn chicken. Gagliardi, who at the time worked at his family's meat-distributing company (Gagliardi Brothers) in West Philadelphia, created the meat as a softer alternative to steak sandwiches of the time.[6][7][8][9] In 1975, the Steak-umm company was started, operating out of a meat-processing plant in West Chester, Pennsylvania, with the name coined by a friend of Gagliardi.[6][8][10] The company was sold to H.J. Heinz in 1980 for $20 million, and marketed under its Ore-Ida frozen foods brand.[8][11]

In April 1994, the Steak-umm brand was acquired by TriFoods International, Inc., a company which Gagliardi founded as Designer Foods, Inc. and held a minority share in. The company was moved from Pennsylvania to Pomfret, Connecticut.[5][12] In 1996, Gagliardi would sue TriFoods in Delaware Chancery Court, after his employment with the company was terminated and he was removed from his Chairman of the Board position.[5] On May 22, 2006, Quaker Maid Meats purchased the rights to the Steak-umm brand, manufacturing the product in Reading, Pennsylvania.[13]

In July 2009, Steak-umm brought suit against a Philadelphia grocery store and sandwich shop called "Steak'em Up" claiming trademark infringement. In 2012, Federal District Judge Lawrence F. Stengel ruled in favor of the owners of Steak'em up, ruling that the two establishments aren't direct competitors and there is no significant evidence that consumers are confused by the names.[6][10]

In 2017, Steak-umm started a campaign to have their Twitter account verified with a blue check with the hashtag #VerifySteakUmm. They acquired verified account status on January 15, 2018.[14][15]

According to inventor Gene Gagliardi, Steak-umm was created after putting beef through a grinder multiple times, mixing and molding it, freezing it, softening it, then ultimately slicing it.[7]

In the 2012 lawsuit, Judge Lawrence Stengel described the product as "chopped and formed emulsified meat product that is comprised of beef trimmings left over after an animal is slaughtered and all of the primary cuts, such as tenderloin, filet, and rib eye, are removed. . . . The emulsified meat is pressed into a loaf and sliced, frozen and packaged."[16]

It is sometimes used as a substitute for chipped beef.[17]

Retrieved from "http://en.turkcewiki.org/w/index.php?title=Steak-umm&oldid=1022905631"
This website is a mirror of Wikipedia, and is not affiliated with the Wikimedia Foundation.
Categories:
Hidden categories: