In international law, an "adequate standard of living" was first described in the Universal Declaration of Human Rights and further described in the International Covenant on Economic, Social and Cultural Rights. To evaluate the impact of policy for sustainable development, different disciplines have defined Decent Living Standards in order to evaluate or compare relative living experience.[3]

During much of its use in economics, improvements to standard of living was thought to be directly connected to economic growth, increase amount of energy consumption and other materials. However, the IPCC Sixth Assessment Report found that literature demonstrates that improvements in sustainable development practices as well as changes in technological efficiency and energy production and use, allow for a Decent Living Standard for all people without fossil fuels and ~15.3 GJ per capita by the end of the 21st century.[4] This allows for climate change mitigation by demand reduction as well as other sustainable development practices.[4]

Standard of living might be evaluated using a number of characteristics including as the quality and availability of employment, class disparity, poverty rate, quality and housing affordability, hours of work required to purchase necessities, gross domestic product, inflation rate, amount of leisure time, access to and quality of healthcare, quality and availability of education, literacy rates, life expectancy, occurrence of diseases, cost of goods and services, infrastructure, access to, quality and affordability of public transportation, national economic growth, economic and political stability, freedom, environmental quality, climate and safety. For the purposes of economics, politics and policy, it is usually compared across time or between groups defined by social, economic or geographical parameters.

Right to an adequate standard of living[edit]

This section is an excerpt from Right to an adequate standard of living.[edit] 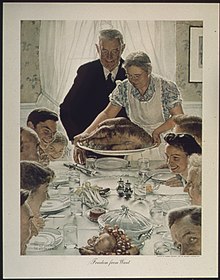 The right to an adequate standard of living is a fundamental human right. It is part of the Universal Declaration of Human Rights that was accepted by the General Assembly of the United Nations on December 10, 1948.[5]

Everyone has the right to a standard of living adequate for the health and well-being of himself and of his family, including food, clothing, housing and medical care and necessary social services, and the right to security in the event of unemployment, sickness, disability, widowhood, old age or other lack of livelihood in circumstances beyond his control.

— Article 25.1 of the Universal Declaration of Human Rights[5]

Furthermore, it has been written down in article 11 of the United Nations' International Covenant on Economic, Social and Cultural Rights.

The predecessor of this right, the Freedom from Want, is one of the Four Freedoms that American President Franklin D. Roosevelt spoke out at his State of the Union of January 6, 1941. According to Roosevelt it is a right every human being everywhere in the world should have. Roosevelt described his third right as follows:[6][7]

The third is freedom from want which, translated into world terms, means economic understandings which will secure to every nation a healthy peacetime life for its inhabitants, everywhere in the world.

Experts use a number of different measures and approaches to establish the decent living standard or DLS.[3] The decent living standard revolves around the idea and principle that a majority of the population are in demand for the basics that will allow them to have shelter, food and water, however it is not always able to be maintained for a long period of time.[8]

Standard of living is generally measured by standards such as inflation-adjusted income per person and poverty rate. Other measures such as access and quality of health care, income growth inequality, and educational standards are also used. Examples are access to certain goods (such as the number of refrigerators per 1000 people), or measurement of health such as life expectancy. It is the ease by which people living in a time or place are able to satisfy their needs and/or wants.[9]

The idea of a 'standard' may be contrasted with the quality of life, which takes into account not only the material standard of living but also other more intangible aspects that make up human life, such as leisure, safety, cultural resources, social life, physical health, environmental quality issues.[10] More complex means of measuring well-being must be employed to make such judgments, and these are very often political and controversial. Even between two nations or societies that have similar material standards of living, quality of life factors may make one of these places more attractive to a given person or group.[citation needed]

Retrieved from "http://en.turkcewiki.org/w/index.php?title=Standard_of_living&oldid=1084693268"
This website is a mirror of Wikipedia, and is not affiliated with the Wikimedia Foundation.
Categories:
Hidden categories: