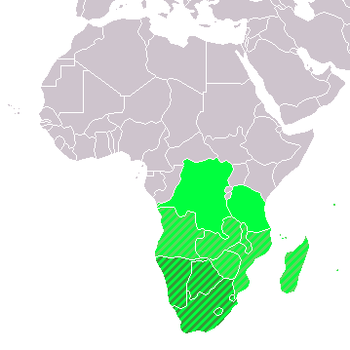 Southern Africa is the southernmost region of the African continent, variably defined by geography or geopolitics, and including several countries. The term southern Africa or Southern Africa, generally includes Angola, Botswana, Eswatini (formerly known as Swaziland), Lesotho, Malawi, Mozambique, Namibia, South Africa, Zambia, and Zimbabwe, though Angola and Zambia may be included in Central Africa and Malawi and Mozambique in East Africa.

Another geographic delineation for the region is the portion of Africa south of the Cunene and Zambezi Rivers : South Africa, Lesotho, Eswatini, Namibia, Botswana, Zimbabwe and the part of Mozambique which lies south of the Zambezi River. That definition is most often used in South Africa for natural sciences and particularly in guide books such as Roberts' Birds of Southern Africa, the Southern African Bird Atlas Project and Mammals of the Southern African Subregion. It is not used in political, economic or human geography contexts because the definition cuts Mozambique in two.

The Southern African Development Community (SADC) was established in 1980 to facilitate co-operation in the region. It includes:[3]

The region is sometimes reckoned to include other territories:

The Democratic Republic of the Congo and Tanzania are more commonly reckoned in Central and Eastern Africa respectively but are occasionally included in Southern Africa, as they are SADC members. 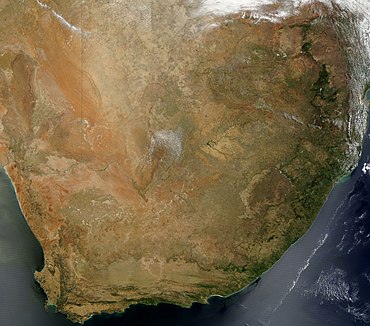 The terrain of Southern Africa is varied, ranging from forest[4] and grasslands to deserts. The region has both low-lying coastal areas, and mountains.

In terms of natural resources, the region has the world's largest resources of platinum and the platinum group elements, chromium, vanadium, and cobalt, as well as uranium, gold, copper, titanium, iron, manganese, silver, beryllium, and diamonds.[5] 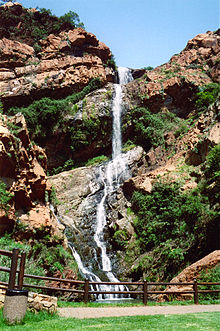 Waterfall in the Witwatersrand region near Johannesburg

These widespread mineral resources make this one of the wealthiest regions of Africa with the greatest potential for economic growth. A chain of mineral resources in Southern Africa stretches from the rich oil fields in northwest Angola, east through the central diamond-mining region in Huambo Province, and into the Copper Belt region of Zambia and Congo. A region of rich mineral deposits continues to the south called the Great Dyke in central Zimbabwe, through the Bushveld basin into South Africa. This extends southwest through the Witwatersrand and Northern Cape of South Africa toward the southern coast. Mining activity exists across the eastern region. Diamond mining is found in parts of Botswana and along the Namibian coast. Coal can also be found in central Mozambique, Zimbabwe and northeast South Africa.[7]

The climate of the region is broadly divided into subtropical and temperate regions in the north and south respectively, but also includes humid subtropical, a Mediterranean climate, highland subtropical, oceanic, desert and semi-arid regions. Except for lower regions of Zambia and interior regions of Namibia and Botswana, the region rarely suffers from extreme heat. In addition to that, the winter presents mostly mild and dry, except in the southwest. Cool southeasterly winds and high humidity bring cool conditions in the winter. Also the Namib desert is the driest area in the region.

Altitude plays an outsize role in moderating the temperatures of the South African Highveld, Lesotho and much of Zambia and Zimbabwe. The prairie region of central and northeast South Africa, Zimbabwe and parts of Zambia is known are known as the veldt, divided into the Bushveld and Highveld regions.

The Western Cape has a Mediterranean vegetation and climate, including the unique fynbos, grading eastward into an oceanic climate along the Garden Route to Port Elizabeth and East London, South Africa.[8] The Namib and Kalahari deserts form are arid lands in the centre-west separating the highlands, woodlands, croplands and pastures of wetter and higher East from the Atlantic ocean. In addition, the Drakensberg and Eastern Highlands separate the highland areas and coastal plains centered on Mozambique in the north and Kwazulu Natal to the south, the latter of which are often prone to flooding every few years. In the east the river systems of the Zambezi and Limpopo basin form natural barriers and sea-lanes between Mozambique, South Africa and Zimbabwe.[9]

East and southern Africa are among the earliest regions where modern humans (Homo sapiens) and their predecessors are believed to have lived. In September 2019, scientists reported the computerized determination, based on 260 CT scans, of a virtual skull shape of the last common human ancestor to modern humans/H. sapiens, representative of the earliest modern humans, and suggested that modern humans arose between 350,000 and 260,000 years ago through a merging of populations in East and South Africa.[10][11] 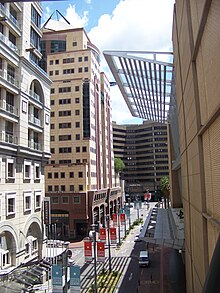 The region is distinct from the rest of Africa, with a robust mining sector and comparatively developed secondary and tertiary sectors. Additionally many countries (with the exception of Mozambique and Malawi in particular) have relatively well developed infrastructure. Some of its main exports including platinum, diamonds, gold, copper, cobalt, chromium and uranium, Southern Africa still faces some of the problems that the rest of the continent does. Despite this diamond production, has fueled the economies of Botswana and Namibia, for example.

Over the 20th century, the region developed a robust manufacturing sector, focused on South Africa and Zimbabwe, which allowed greater prosperity and investments into infrastructure, education and healthcare that elevated both nations into middle income economies and captured growing markets across Africa.[12] However, since the 1990s these industries have struggled in the face of globalisation and cheaper imports from China, leading to job losses particularly in heavy industry, gold mining and textiles. Zimbabwe in particular has seen significant de-industrialisation as a result of factors both domestic and foreign.[13] While colonialism has left its mark on the development over the course of history,[14][15] today poverty, corruption, and HIV/AIDS are some of the biggest factors impeding economic growth. In addition, South Africa and Zimbabwe in particular, face high emigration among their skilled workers leading to a significant brain drain to western economies and billions lost in human capital flight. The pursuit of economic and political stability is an important part of the region's goals, as demonstrated by the SADC, however complete regional integration remains an elusive target.

In terms of economic strength, South Africa is the dominant economy of the region. Generally, mining, agriculture, the public sector and tourism dominate the economies of Southern African countries, apart from South Africa which has mature and flourishing financial, retail, and construction sectors. Zimbabwe maintains a smaller banking and real estate sector along with what remains of its manufacturing industry, despite a protracted economic crisis. Most global banks have their regional offices for Southern Africa based in Johannesburg. Over the years, some the other Southern African nations have invested in economic diversification, and invested public funds into rail, road and air transportation as part of a concerted effort through SADC to boost regional trade and improve communication and transportation. The countries in this region also belong to the Southern Africa Power Pool, which facilitates the development of a competitive electricity market within the SADC region and ensures sustainable energy developments through sound economic, environmental and social practices. The main objective of the power pool is to develop a world class, robust and safe interconnected electrical system across the Southern African Region. According to a report by Southern Africa Power Pool, the three largest producers of electricity in Southern Africa as at 2017, include Eskom in South Africa with an estimated 46,963MW, Zesco in Zambia with 2,877MW and SNL of Angola with 2,442MW. Whilst moderately successful by African standards, the region largely lags behind their Asian counterparts in innovation, foreign direct investment, STEM sciences and research and development.[16]

Southern Africa has a wide diversity of ecoregions including grassland, bushveld, karoo, savannah and riparian zones. Even though considerable disturbance has occurred in some regions from habitat loss due to human population density or export-focused development, there remain significant numbers of various wildlife species, including white rhino, lion,[17] African leopard, impala, kudu, blue wildebeest, vervet monkey and elephant. It has complex Plateaus that create massive mountain structures along the South African border.

There are numerous environmental issues in Southern Africa, including air pollution and desertification.

Southern Africa is home to many people. It was initially populated by indigenous or native Africans San, Khoikhoi[18] and Pygmies in widely dispersed concentrations. Due to the Bantu expansion which edged the previous native African peoples to the more remote areas of the region, the majority of African ethnic groups in this region, including the Xhosa, Zulu, Tsonga, Swazi, Northern Ndebele, Southern Ndebele, Tswana, Sotho, Northern Sotho, Shona people, Mbundu, Ovimbundu, Shona, Chaga and Sukuma, speak Bantu languages. The process of colonization and settling resulted in a significant population of native European (Afrikaner, British, Portuguese Africans, etc.) and Asian descent (Cape Malays, Indian South Africans, etc.) in many southern African countries.

Further information in the sections of History of science and technology in Africa:

These factors vary from country to country. For example, the Democratic Republic of the Congo has favourable climatic and physical conditions, but performs far below its capacity in food provision due to political instability and poor governance. In contrast, semi-arid countries such as Botswana and Namibia, produce insufficient food, but successfully achieve food security through food imports due to economic growth, political stability and good governance. The Republic of South Africa is a major food producer and exporter in the region.[21]

Data on agricultural production trends and food insecurity especially in term of food availability for Southern Africa is readily available through the Famine Early Warning Systems Network (FEWS NET) and Southern African Development Community (SADC) - Food, Agriculture and Nature Resource Directorate (FARN). However, this data might not fully capture the reality of a region with large urban populations and where food insecurity goes beyond per-capita availability to issues of access and dietary adequacy.[22][23]

Urban food security has been noted as an emerging area of concern in the region, with recent data showing high levels of food insecurity amongst low-income households. In a study of eleven cities in nine countries: Blantyre, Cape Town, Gaborone, Harare, Johannesburg, Lusaka, Maputo, Manzini, Maseru, Msunduzi (Durban Metro) and Windhoek, only 17% of households were categorized as ‘food-secure’ while more than half (57%) of all households surveyed were found to be ‘severely food-insecure’.[24]

Some factors affecting urban food insecurity include climate change with potential impact on agricultural productivity, the expansion of supermarkets in the region, which is changing the way people obtain food in the city, rural-to-urban migration, unemployment, and poverty.[25][26][27][28] The issue of food insecurity in general and urban food insecurity in particular in the region is also characterized by an increased consumption of caloric junk food and processed foods leading to potential increase in the co-existence of undernutrition and dietary-related chronic diseases such as obesity and hypertension.[29][30] In South Africa for example, while over 50% experience hunger, 61% are overweight or morbidly obese.[31][32][33] There is only limited data on the other Southern African countries.

Retrieved from "http://en.turkcewiki.org/w/index.php?title=Southern_Africa&oldid=1027536429"
This website is a mirror of Wikipedia, and is not affiliated with the Wikimedia Foundation.
Categories:
Hidden categories: