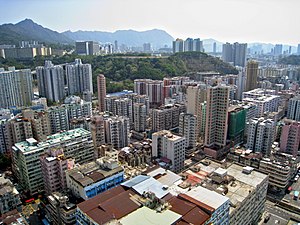 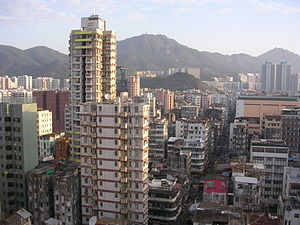 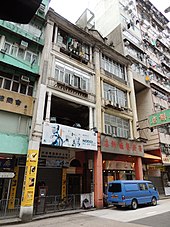 Sham Shui Po is an area of Kowloon, Hong Kong, situated in the northwestern part of the Kowloon Peninsula, north of Tai Kok Tsui, east of Cheung Sha Wan and south of Shek Kip Mei (石硤尾). It is located in and is the namesake of the Sham Shui Po District.

A predominately lower-income neighborhood, Sham Shui Po is one of the densest and most vibrant neighbourhoods in Hong Kong.[1] It has a diverse mix of migrants from rural China, working-class families and seniors, with many living in cage homes, subdivided flats and public housing estates. Sham Shui Po has many lively street markets, electronics outlets, fabric stores, restaurants and food vendors. It is famous for Golden Computer Shopping Arcade for bargain electronics and accessories.

The discovery in 1955 of the Lei Cheng Uk Han Tomb indicates that as early as 2000 years ago there were Chinese people settled in what is now Sham Shui Po. Sham Shui Po means "Deep Water Pier" in Cantonese. At the time, the water in Sham Shui Po was deeper than the beach of Cheung Sha Wan to the northwest. It is close to the former peninsula of Tai Kok Tsui, the low ridge of which ends in Sham Shui Po.

In the first stage, the town of Sham Shui Po was bounded by Yen Chow Street, Tung Chau Street, Wong Chuk Street, and Apliu Street. Part of the town was on reclamation land. The town was surrounded by the villages of Un Chau [zh], Tin Liu, and Tong Mei. A nullah along Nam Cheong Street was constructed to drain the water of rivers to the north and east (which explains the street's wideness). The town was closed to Cosmopolitan Dock on the outer shore of Tai Kok Tsui.

Under Japanese occupation, a concentration camp was maintained here for most of the duration of the Second World War. An account of life by a British POW has been published as The Hard Way: Surviving Shamshuipo POW Camp 1941–45 by Victor Stanley Ebbage (Spellmount, 2011).

As Sham Shui Po was one of the earliest developed areas in Hong Kong, it was once a commercial, industrial and transportation hub of the territory. As of 2003, Sham Shui Po is covered mainly by residential buildings, with public housing estates built on approximately 810,000 square metres (8,700,000 sq ft) of land. Factories and warehouses are still concentrated mainly in Cheung Sha Wan.

It is connected to the MTR rail network via the Sham Shui Po station on the Tsuen Wan line. 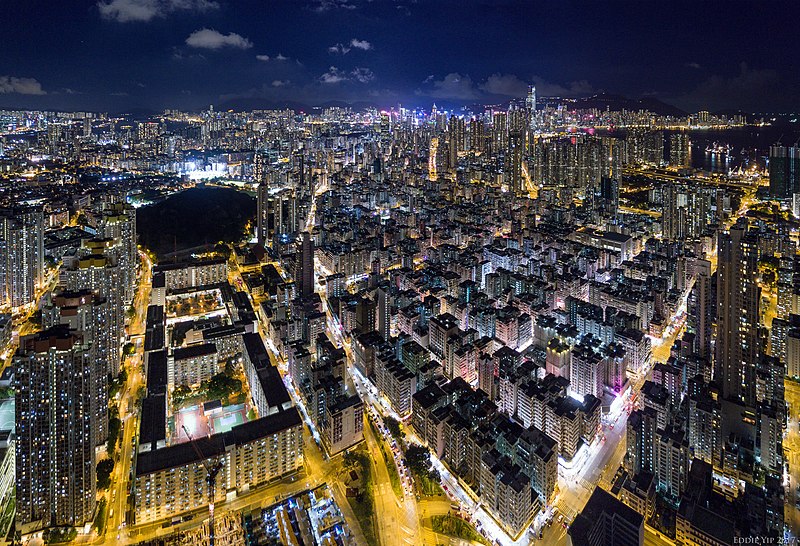 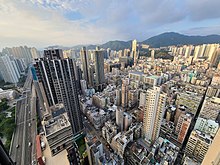 Sham Shui Po is an area where urban decay is serious in Hong Kong.[citation needed] The government is carrying out urban renewal projects.

In July 2003 the Hong Kong Housing Society (HKHS) announced that its first urban renewal project would be to improve the living environment at Po On Road/Wai Wai Road in Sham Shui Po. Covering an area of 2,436 square metres (26,220 sq ft) and affecting approximately 500 households, this project will provide 330 residential flats and some retail units. Government, institutional and community facilities will also be erected for the community. This development will require the HKHS to acquire about 157 properties, costing an estimated HK$240 million. The total development cost of the project is about HK$720 million. To promote creative tourism in old Hong Kong districts of Wan Chai and Sham Shui Po Hong Kong Design Centre unveiled a budget of $60 Million.[3] 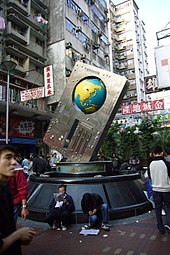 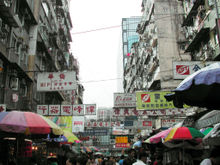 Colourful parasols cropped up along the busy Apliu Street

A market in Ki Lung Street

The street market in Sham Shui Po is a hotspot for both locals and tourists.

Golden Computer Centre is one of the major malls selling computer-related equipment (see next section).

The market on Ki Lung Street is also famous for its fresh food and cheap prices. In the early 1990s, the Hong Kong government rebuilt the market and also added air conditioning.

Nam Cheong Street and Ki Lung Street are most famous for their fabric stores, containing cloth, sash, ribbons and buttons.

Once infamous for counterfeit software but today considered one of the cheapest places in Hong Kong to purchase a personal computer, the Golden Shopping Centre is a prominent IT shopping centre.[4] Products range from complete systems, cell phones, to various peripherals. Unlike purely consumer-oriented IT shopping centres, Golden features several stores specializing in professional and esoteric network equipment.

The Golden Shopping Centre is also known for the number of video game stores it contains, where people purchase gaming systems, software and accessories at either a slightly discounted price, or in special in-store packages which might include an extra game or extra accessories. Since the halls are extremely narrow, it is often very congested, especially on weekends. The mall has two floors. The upper floor, Golden Computer Centre (高登電腦中心), mainly sells games and gaming software, while the lower floor, Golden Computer Arcade (黃金電腦商場), focuses on the sales of computer-oriented hardware. They were originally fashion markets named "Golden Shopping Centre" and "Golden Shopping Arcade" respectively.

Dragon Centre is a nine-storey shopping centre. It was the largest shopping centre in West Kowloon until Elements opened its doors above the Kowloon MTR station.

As Sham Shui Po is usually regarded as one of the poorest and oldest districts in Hong Kong, it is well known for people to find cheap and local food in Sham Shui Po. A lot of local restaurants are located in Fuk Wa Street, Fuk Wing Street, Pei Ho Street and Kweilin Street. Some of the famous restaurants include Kung Wo Beancurd Factory, Wai Kee Noodle Cafe, Man Kee Cart Noodle and Kwan Kee Store, which are highly praised for their soy milk and pudding, pork liver noodles, cart noodles and traditional puddings respectively. Some of these unique restaurants are also starred by Michelin and recommended in its list. 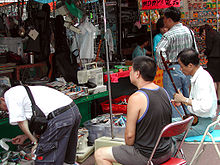 Erhu performance is a popular pastime for the district dwellers.

Streets and roads in Sham Shui Po include: 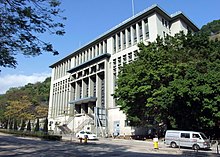 The district is home to several prestigious schools, including

Ladies World Snooker champion Ng On-yee grew up in the area, and learned the game at her father's snooker hall there.[12]

Retrieved from "http://en.turkcewiki.org/w/index.php?title=Sham_Shui_Po&oldid=1129088834"
This website is a mirror of Wikipedia, and is not affiliated with the Wikimedia Foundation.
Categories:
Hidden categories: