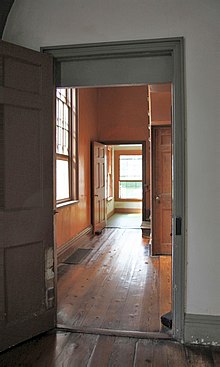 The servants' hall is a common room for domestic workers in a great house. The term usually refers to the servants' dining room.[1]

If there is no separate sitting room, the servants' hall doubles as the place servants may spend their leisure hours and serves as both sitting room and dining room.[2]

Meals in the servants' hall were sometimes very formal affairs, depending on the size and formality of the household. At dinner in a formal house, the butler and housekeeper presided over the table much as the master and lady of the house did 'above stairs' (i.e., in the rooms occupied by the employer). [3]

In Victorian England, the strict rules of precedence were mirrored by the domestic staff in grand or formal homes in the seating arrangements of the Servants' Hall. A senior servant such as the lady's maid took the place of honour but would have to "go lower" (i.e. take a place further down the table) if the employer of a visiting servant outranked the mistress of the house.

Retrieved from "http://en.turkcewiki.org/w/index.php?title=Servants%27_hall&oldid=912041750"
This website is a mirror of Wikipedia, and is not affiliated with the Wikimedia Foundation.
Categories:
Hidden categories: