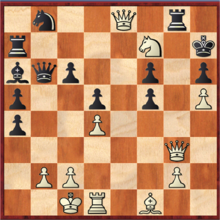 Chess is an example of a sequential game.

In game theory, a sequential game is a game where one player chooses their action before the others choose theirs.[1] Importantly, the later players must have some information of the first's choice, otherwise the difference in time would have no strategic effect. Sequential games hence are governed by the time axis, and represented in the form of decision trees.

Decision trees are the extensive form of dynamic games that provide information on the possible ways that a given game can be played. They show the sequence in which players act and the number of times that they can each make a decision. Decision trees also provide information on what each player knows or does not know at the point in time they decide on an action to take. Payoffs of each player are also given at the decision nodes of the tree. Extensive form representations were introduced by Neumann and further developed by Kuhn in the earliest years of game theory between 1910–1930.[2]

Repeated games are an example of sequential games. Players play a stage game and the result of this game will determine how the game continues. At every new stage, both players will have complete information on how the previous stages had played out. A discount rate between the values of 0 and 1 is usually taken into account when considering the payoff of each player in these games. Repeated games can illustrate the psychological aspect of these games, including trust and revenge, as each player makes a decision at every stage game based on how the game has been played out so far.[2]

Games such as chess, infinite chess, backgammon, tic-tac-toe and Go are examples of sequential games. The size of the decision trees can vary according to game complexity, ranging from the small game tree of tic-tac-toe, to an immensely complex game tree of chess so large that even computers cannot map it completely.[3]

In sequential games with perfect information, a subgame perfect equilibrium can be found by backward induction.[4]

Retrieved from "http://en.turkcewiki.org/w/index.php?title=Sequential_game&oldid=994477934"
This website is a mirror of Wikipedia, and is not affiliated with the Wikimedia Foundation.
Categories:
Hidden categories: