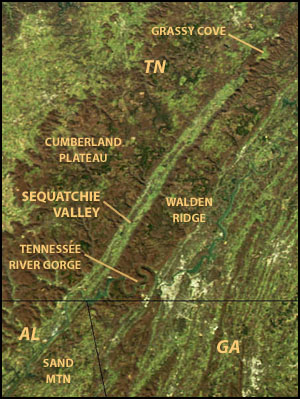 Sequatchie Valley is a relatively long and narrow valley in the U.S. state of Tennessee and, in some definitions, Alabama. It is generally considered to be part of the Cumberland Plateau region of the Appalachian Mountains; it was probably formed by erosion of a compression anticline, rather than rifting process as had been formerly theorized.

The Sequatchie River drains the valley in Tennessee, flowing south to southwest from the southern part of Cumberland County, Tennessee to the Tennessee River near the Alabama border.

Geologically, the Sequatchie Valley continues south of the Tennessee River into central Alabama. The Tennessee River flows through the Alabama portion of the valley to the vicinity of Guntersville, Alabama. The valley continues south of Guntersville, where it is called Browns Valley, drained by Browns Creek (Thornbury 1965:148). Although this whole valley is geologically the same, the name Sequatchie is commonly used only for the Tennessee portion of the valley, through which the Sequatchie River flows.

A distinctive feature of the Sequatchie Valley is its straightness. From its northern end to its geological southern end at Browns Valley, the valley is almost perfectly straight. It is over 150 miles (240 km) long in the geologic sense and about 65 miles (105 km) long as the valley of the Sequatchie River. Its width is about 3–5 miles (5–8 km).

The Tennessee section of Sequatchie Valley contains the towns of Pikeville, Dunlap, Whitwell, Jasper, and, on the Tennessee River, South Pittsburg. Towns in the Alabama portion of the geologic valley include Bridgeport, Scottsboro, Guntersville, and, around the southern end, Blountsville.

Retrieved from "http://en.turkcewiki.org/w/index.php?title=Sequatchie_Valley&oldid=1012496414"
This website is a mirror of Wikipedia, and is not affiliated with the Wikimedia Foundation.
Categories:
Hidden categories: