Jump to content
This article is about the place in Japan. For the city in People's Republic of China, see Sanya. For other uses, see Sanya (disambiguation).
Area in Japan

San'ya (山谷, San'ya) is an area in the Taitō and Arakawa wards of Tokyo, located south of the Namidabashi intersection, around the Yoshino-dori. A neighborhood named "San'ya" existed until 1966, but the area was renamed and split between several neighborhoods.

It is a region with a distinct culture, an area of crowded, cheap rooming houses where day laborers live.[1]

San'ya dates to the Edo period. Lower caste workers, butchers, tanners, leatherworkers, and the like, were forced to live in this undesirable region by the predominantly Buddhist authorities. It has retained its association with both lower class workers and with craftsmen. Within the past few years gentrification has begun to encroach on the area.

In recent years, some of the rooming houses have converted to provide cheap accommodation for foreign backpackers.

Since the Edo period, Kichinyado (木賃宿, a type of cheap lodging house that does not serve meals) have been located along the sides of the Ōshū Kaidō and the Nikkō Kaidō routes (two of the five main Edo period routes). To this day, there are many of these simple lodging establishments in areas where day laborers assemble. Throughout Japan, these lodging establishments are called “doya"(ja:ドヤ街). Prior to 1966, the address of this area was Taito-Ward, Asakusa, Sanya 1~4 Chome, but due to a government program enforcing the renaming of displayed address across Japan, the name “Sanya” faded away.

Presently, in Tokyo, the area designated “The Sanya District” is in the heart of the Namidabashi (Bridge of Tears) intersection. The simple-lodging establishments are concentrated in the below areas:

Namidabashi (on the borderline of current day Taito-Ward and Arakawa-Ward) is on the boundary of former Edo, nearby there were areas such as an execution site and a temple where the corpses of prostitutes were thrown. Still, in the neighborhood of the southwestern part of Sanya, there is a soapland district formerly known as Yoshiwara (this name also faded away due to the government's address renaming programming in 1966. The area is now known as Taito-Ward, Senzoku – 1 Bureau).

The working conditions of the day laborers of Sanya are substandard, and many fall prey to the yakuza crime syndicate. In reaction, anti-war and anti-emperor system billboards and signs can also be seen in the district. Catholic and Protestant churches and other organizations took root in Sanya, and in cooperation, provide emergency food and other humanitarian services. 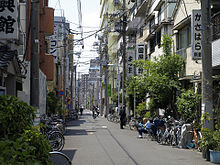 Most of the simple-lodging establishments provide only a place where one can sleep (things such as food services are not provided). Inside, the lodging facilities can vary; dormitory style rooms for eight people are even offered. Also, on the front of many of these lodgings, signs with promotional phrases such as “Color TV in Every Room,” “Air Conditioned and Heated Rooms” are hung. Although this trivial formality may vary lodging to lodging, with the exception of newly constructed simple-lodging establishments, these two phrases are almost always present.

Since the 2002 FIFA World Cup, foreign tourists have started using cheap lodging in Sanya (mainly in Senjuu). Foreign customers are increasing due to the fact that prices are inexpensive, there is decent public order (to the degree that drunken fights between friends resulting in injury, shop lifting, and about five murder cases per year), and from the nearest station, the Minami Senju Subway Station, via the Hibiya Line, you can go to Ueno, Akihabara, Ginza, Roppongi and other sightseeing spots. Moreover, because of the increasing interactions with foreigners, Sanya's former image is being transformed and “a cheap hotel town for foreigners” image is being established.

On October 3, 2008, after the arson incident on the Minami adult video store in Osaka, the prefectural governor or Tokyo, Ishihara Shintaro, made the following comment concerning lodging establishments in Sanya and the people displaced from the fire, “If you go to Sanya, there are plenty of places you can stay for 200 or 300 yen, but in fashion, while you stay over at a 1500 yen a night place, you say things like, “This is dreadful.”” In regards to this statement, the Chief of Taito-Ward protested, which led to Ishihara, in an interview on October 10, 2008 to correct his previous statement by saying “The numbers were a little off.” As of 2008, places where you can stay for 200 or 300 yen do not exist.

Originally, the area was the first inn town in the direction of Edo on the Nikkoukaidou Highway. From the early days of the Meiji Era, it was the government's intention to form the cheap housing district in the outskirts of the city near the highway in order to have a place for rickshaw workers who shuttled customers to and from the Yoshiwara Red Light District to live. By the pre-war days, there was already a largely poor class, such as day laborers, residing in the area. After the war, temporary lodging (tent village) were prepared for the war victims, however these were changed into the permanent simple-lodging establishments that are seen today. Before long, the period of rapid economic growth experienced in Japan after WWII arrived, and in order to cope with the upsurge in the demand for workers, Japan's more prominent location for temporary workers, Sanya, was developed. By 1961, the 300 simple-lodging establishments had been built in Sanya were housing approximately 20,000 workers.

During the 1960s, due to the many riots with participants numbering in the thousands, this area had to establish the Sanya-District Police Station (once popularly called “Mammoth Station”, is now currently renamed to Nihon-Tsutsumi Police Station). Many reasons have surfaced regarding the direct origin of the riots, but one theory points to abetment from criminals and radical party extremists.

In 1969, the folk singer, Okabayashi, debuted, “Sanya Blues,” a song about the grief of day laborers. It is said that Okabayashi manufactured the image of his lengthy stint in Sanya, when in fact his stay was to the extent of one week. In the year 1984 and 1988, the successive assassinations occurred of two people producing the documentary “Sanya – Attack to Attack,” a film which paints the conflicts of the day laborers with the secret maneuvering of the Yakuza. The murder suspects are members of the “Kokusuikai” Yakusa Assembly.

In 1996, Tokyo and the 23 Wards of Tokyo mutually agreed to carry out a deed that gave protection to homeless people. Until each ward decided on a residence for their homeless population, they entrusted their homeless residents to Sanya. The measure was to temporarily give custody, but problems such as who was the guarantor of the homeless existed. After that once more the wards could not find that many apartments to take over for their homeless, so more homeless were taken to Sanya, and just like that, left alone. Over a long period of time, many people became left with an uncertain address. From this sort of action, Sanya is ridiculed as the “district of abandoned people” In recent years, the aging of Sanya's principal residents, the day laborers, and the decreasing population have become problems. From this fact, it is said that “The town of day laborers” is in the process of becoming “The town of welfare.”

After the government act to change the name of Sanya and several other locations in Tokyo in the 1960s, the name Sanya has been fading away. Outside of the name's usage in outdated maps, below are some of the few locations in Tokyo where the written word “Sanya” can still be seen:

Retrieved from "http://en.turkcewiki.org/w/index.php?title=San%27ya&oldid=1102461016"
This website is a mirror of Wikipedia, and is not affiliated with the Wikimedia Foundation.
Categories:
Hidden categories: