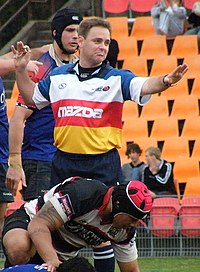 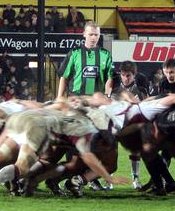 Rugby union match officials are responsible for enforcing the rugby union laws of the game during a match and imposing sanctions on individuals who do not follow the rules. "Every match is under the control of match officials who consist of the referee and two touch judges or assistant referees."[1] Further officials can be authorised depending on the level and form of the game.[2] 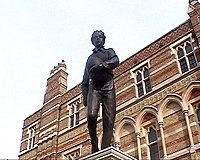 When the game of rugby union was developed at Rugby school, there were no official rugby referees. It was not until many years later when the game began to spread internationally that an official was included.

Before the creation of rugby referees, the captains from both teams would set the rules down before the game began. The two captains would arbitrate the game together as it went on. This is where the ‘advantage’ law comes from in rugby union. This was because a team’s captain was not likely to complain or stop play if his side benefited from the other team’s infringement.

In 1892, the International Rugby Board was created as a result of a disputed try that the captains could not agree on whether it had been scored. The rugby laws were changed to require one referee and two touch judges at each game to make the arbitration easier and more consistent.[3]

Since then the match official’s job has remained constant. The main change has been in the uniform and since 2000 the use of communication equipment and the television match official has greatly increased.[4]

Metal whistle similar to that used by most referees

Rugby union match officials must use the following equipment:

Coin
The referee organises a coin toss with the team captains to decide who kicks off and what end each team takes initially.[5]
Whistle
Referees must carry a whistle to indicate certain occurrences in the game.[6]
Red card
A red card is used to signal that a player is being sent from the field, or "sent off", for the rest of a match. The referee signals this by holding it aloft in the direction of the player. In International matches, a red card must be used to send a player off unlike rugby league where a player can simply be pointed to the touchline by the referee.[7] (Red cards are not required at lower level matches but most referees carry them.)
Yellow card 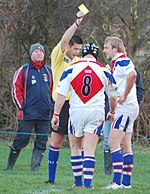 Referee giving a player a yellow card
A yellow card is used to signal that a player is being temporarily suspended from the game. The player is sent to the "sin bin" for 10 minutes, after which time they are allowed to return to carry on playing. Similarly to the red card, in International matches a yellow card must be used to temporarily suspend a player unlike Rugby league where the referee, while facing the player being disciplined, will hold out both hands with fingers and thumbs spread to represent 10 minutes.[8]
Flag
The touch judges or assistant referees must each carry a flag, which is used to signal certain things to the referee, players and spectators. The things that a touch judge can indicate with the flag are slightly different from that of an assistant referee. A touch judge must indicate a successful kick at goal (unlike rugby league the flag is simply kept down for an unsuccessful kick), when the ball or player holding the ball has gone out of bounds and which team is to throw in. They must also leave the flag up if the wrong team has thrown the ball in, the wrong ball is used at a quick throw, the ball has been touched by any other person than the player throwing the ball at a quick throw and if the foot or part of the foot of the player throwing in is in the field of play.[9]
Watch
The referee is required to have a watch or timekeeping device as the referee is solely responsible for keeping the time.[10] In some situations such as professional games time keepers may be appointed and signal the ends of halves but referees are still required to keep the time themselves.[11]
Score card
Referees are required to carry a scorecard as they are solely responsible for keeping the score.[12] Once again this job is often given to others but the referee is responsible for the score and must keep it in case there is a complaint about the correctness of the score.[11]

Rugby union match officials may use the following equipment:

Uniform
Many rugby unions require referees to wear a specific uniform to make them easily identifiable and to support the relevant sponsor. These uniforms are usually picked so that they stand out from the teams playing so the ball is not passed to a referee. Uniforms usually consist of a jersey, shorts and socks. In high level games, other officials will also be required to wear a uniform.
Boots
Many rugby unions also require their referees to wear rugby boots so they can move quickly and easily around the field. Some unions do permit the use of running shoes as an alternative.
Microphone and earpiece
Communication equipment can be used to communicate between officials. This is also often used in televised games to allow viewers to hear what is happening.[11]

Before the game, a referee must:

The duties of the referee during the game are:

After the game a referee is required to: 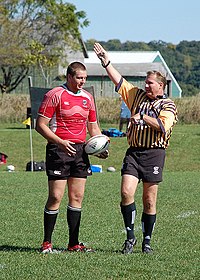 The referee having made a decision is required to indicate the decision by blowing the whistle and signalling. Primary signals relate to what decision is being awarded. For example, whether a scrum or penalty is awarded. Secondary signals relate to why the decision is being awarded. For example, a knock-on (scrum) or a high tackle (penalty). There are also signals for stoppages in time, replacement and scoring to ensure everyone knows what is happening.[28]

During the game touch judges and assistant referees must:

A touch judge has no responsibilities after a match. The only responsibility an assistant referee has is to complete a written report to send to the referee that is then sent to the union in charge of the game. The report is only required if a player has been sent off or temporarily suspended because of their report on foul play.[35] 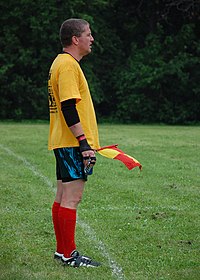 Touch judge with flag, who appears to be a reserve of one of the teams.

The touch judges and assistant referees cannot stop play, but can signal the referee to enable them to assist him.[36]

In lower level games, where no TMO has been appointed, the referee cannot use video equipment in supporting any decision. (Local or junior matches are often recorded by coaches or parents, but these videos cannot be used by the referee in supporting a decision due to the possibility of bias. Such videos may though be acceptable as evidence in any post-match discipline hearing.)

At higher levels of rugby, some games have appointed substitution controllers (sometimes called the “fourth official” and “fifth official”). These officials liaise with the teams and ensure they only use their permitted number of substitutions. They also indicate to the referee when a substitute is ready to come on. They often use signs with the number of the player coming off and the player going on the field. This means it is one less thing for the referee to worry about. If an assistant referee is injured then one of the substitution controllers will take the place of the assistant referee.[2]

A timekeeper may also be appointed to indicate to the referee when they believe a half should end. Ultimately, it is up to the referee to decide.[38]

In-goal judges are used in the seven-a-side variation of rugby union to assist the referee in awarding a try and signalling kicks at goal instead of the assistant referees.[39]

As a reaction to this rugby unions have begun handing out long bans and large fines to individuals who physically assault a referee,[44] and more recently verbal assault of referees has also received severe punishments.[45] Now the common punishment for a player punching a referee or anything similar is a lifetime ban.[46] The laws of the game have also been changed to help this by making it compulsory for any official to report any abuse on them or another official to the union in charge of the fixture.[47]

Appointments of officials to games are usually done by the Union in charge of the fixture. The appointment of referees to international games comes from the IRB International Referees Panel. This ensures that the best officials are adjudicating international matches. Other major competitions such as Super Rugby, Heineken Cup and age group world cups use a similar system.[48]

Western Force (blue) kicking off to the New South Wales Waratahs (white) in Super Rugby. The officials clearly stand out in their yellow uniforms.

References to the Laws or a Law are to the Laws of the game: Rugby Union 2010, published by the International Rugby Board, Dublin, Ireland.

Retrieved from "http://en.turkcewiki.org/w/index.php?title=Rugby_union_match_officials&oldid=1097369901"
This website is a mirror of Wikipedia, and is not affiliated with the Wikimedia Foundation.
Categories:
Hidden categories: