In contrast to romanization, there have been several historical proposals for a native Ukrainian Latin alphabet, usually based on those used by West Slavic languages, but none has caught on. 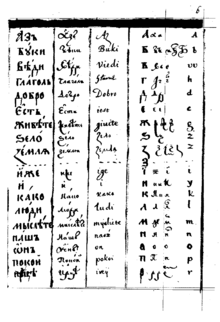 Part of a table of letters of the alphabet for the Ruthenian language, from Ivan Uzhevych's Hrammatyka Slovenskaja (1645). Columns show the letter names printed, in manuscript Cyrillic and Latin, common Cyrillic letterforms, and the Latin transliteration. Part 2, part 3.

Scientific transliteration, also called the academic, linguistic, international, or scholarly system, is most often seen in linguistic publications on Slavic languages. It is purely phonemic, meaning each character represents one meaningful unit of sound, and is based on the Croatian Latin alphabet.[2] Different variations are appropriate to represent the phonology of historical Old Ukrainian (mid 11th–14th centuries) and Middle Ukrainian (15th–18th centuries).[3]

A variation was codified in the 1898 Prussian Instructions for libraries, or Preußische Instruktionen (PI), and widely used in bibliographic cataloguing in Central Europe and Scandinavia. With further modifications it was published by the International Organization for Standardization as remmondation ISO/R 9 in 1954, revised in 1968, and again as an international standard in 1986 and 1995.

Representing all of the necessary diacritics on computers requires Unicode, Latin-2, Latin-4, or Latin-7 encoding. Other Slavic based romanizations occasionally seen are those based on the Slovak alphabet or the Polish alphabet, which include symbols for palatalized consonants.

The ALA-LC Romanization Tables were first discussed by the American Library Association in 1885,[4] and published in 1904 and 1908,[5] including rules for romanizing Church Slavic, the pre-reform Russian alphabet, and Serbo-Croatian.[6] Revised tables including Ukrainian were published in 1941,[7] and remain in use virtually unchanged according to the latest 2011 release.[8] This system is used to represent bibliographic information by US and Canadian libraries, by the British Library since 1975,[9] and in North American publications.

In addition to bibliographic cataloguing, simplified versions of the Library of Congress system are widely used for romanization in the text of academic and general publications. For notes or bibliographical references, some publications use a version without ligatures, which offers sufficient precision but simplifies the typesetting burden and easing readability. For specialist audiences or those familiar with Slavic languages, a version without ligatures and diacritical marks is sometimes used.[10] For broader audiences, a "modified Library of Congress system" is employed for personal, organizational, and place names, omitting all ligatures and diacritics, ignoring the soft sign ь (ʹ), with initial Є- (I͡E-), Й- (Ĭ-), Ю- ( I͡U-), and Я- (I͡A-) represented by Ye-, Y-, Yu-, and Ya-, surnames' terminal -ий (-yĭ) and -ій (-iĭ) endings simplified to -y, and sometimes with common first names anglicized, for example, Олександр (Oleksandr) written as Alexander.

Similar principles were systematically described for Russian by J. Thomas Shaw in 1969,[11] and since widely adopted. Their application for Ukrainian and multilingual text were described in the 1984 English translation of Kubiiovych's Encyclopedia of Ukraine[12] and in the 1997 translation of Hrushevskyi's History of Ukraine-Rus',[13] and other sources have referred to these, for example, historian Serhii Plokhy in several works. However, the details of usage vary, for example, the authors of the Historical Dictionary of Ukraine render the soft sign ь with an i, "thus Khvyliovy, not Khvylovy, as in the Encyclopedia of Ukraine".[14]

Requires Unicode for connecting diacritics, but only plain ASCII characters for a simplified version.

British Standard 2979:1958 "Transliteration of Cyrillic and Greek Characters",[15] from BSI, is used by the Oxford University Press.[16] A variation is used by the British Museum and British Library, but since 1975 their new acquisitions have been catalogued using Library of Congress transliteration.[9]

BGN/PCGN romanization is a series of standards approved by the United States Board on Geographic Names and Permanent Committee on Geographical Names for British Official Use. Pronunciation is intuitive for English-speakers. For Ukrainian, the former BGN/PCGN system was adopted in 1965, but superseded there by the Ukrainian National System in 2019.[18] A modified version is also mentioned in the Oxford Style Manual.[16]

Requires only ASCII characters if optional separators are not used.

The Soviet Union's GOST, COMECON's SEV, and Ukraine's Derzhstandart are government standards bodies of the former Eurasian communist countries. They published a series of romanization systems for Ukrainian, which were replaced by ISO 9:1995. For details, see GOST 16876-71.

ISO 9 is a series of systems from the International Organization for Standardization. The ISO published editions of its "international system" for romanization of Cyrillic as recommendations (ISO/R 9) in 1954 and 1968, and standards (ISO 9) in 1986 and 1995. This was originally derived from scientific transliteration in 1954, and is meant to be usable by readers of most European languages. The 1968 edition also included an alternative system identical to the British Standard.[17]

Representing all of the necessary diacritics on computers requires Unicode, and a few characters are rarely present in computer fonts, for example g-grave: g̀.

This is the official system of Ukraine, also employed by the United Nations and many countries' foreign services. It is currently widely used to represent Ukrainian geographic names, which were almost exclusively romanized from Russian before Ukraine's independence in 1991, and for personal names in passports. It is based on English orthography, and requires only ASCII characters with no diacritics.

Its first version was codified in Decision No. 9 of the Ukrainian Committee on Issues of Legal Terminology on April 19, 1996,[19][20] stating that the system is binding for the transliteration of Ukrainian names in English in legislative and official acts.

A new official system was introduced for transliteration of Ukrainian personal names in Ukrainian passports in 2007.

An updated 2010 version became the system is used for transliterating all proper names and was approved as Resolution 55 of the Cabinet of Ministers of Ukraine, January 27, 2010.[21][22] This modified earlier laws and brought together a unified system for official documents, publication of cartographic works, signs and indicators of inhabited localities, streets, stops, subway stations, etc.

It has been adopted internationally. The 27th session of the UN Group of Experts on Geographical Names (UNGEGN) held in New York 30 July and 10 August 2012 after a report by the State Agency of Land Resources of Ukraine (now known as Derzhheokadastr: Ukraine State Service of Geodesy, Cartography and Cadastre) experts[23] approved the Ukrainian system of romanization.[24] The BGN/PCGN jointly adopted the system in 2020.[25]

Official geographic names are romanized directly from the original Ukrainian and not translated. For example, Kyivska oblast not Kyiv Oblast, Pivnichnokrymskyi kanal not North Crimean Canal.[26]

Romanization for other languages than English[edit]

Romanization intended for readers of other languages than English is usually transcribed phonetically into the familiar orthography. For example, y, kh, ch, sh, shch for anglophones may be transcribed j, ch, tsch, sch, schtsch for German readers (for letters й, х, ч, ш, щ), ir it may be rendered in Latin letters according to the normal orthography of another Slavic language, such as Polish or Croatian (such as the established system of scientific transliteration, described above).

Users of public-access computers or mobile text messaging services sometimes improvise informal romanization due to limitations in keyboard or character set. These may include both sound-alike and look-alike letter substitutions. Example: YKPAIHCbKA ABTOPKA for "УКРАЇНСЬКА АВТОРКА". See also Volapuk encoding.

For telegraph transmission. Each separate Ukrainian letter had a 1:1 equivalence to a Latin letter. Latin Q, W, V, and X are equivalent to Ukrainian Я (or sometimes Щ), В, Ж, Ь. Other letters are transcribed phonetically. This equivalency is used in building the KOI8-U table.

In many contexts, it is common to use a modified system of transliteration that strives to be read and pronounced naturally by anglophones. Such transcriptions are also used for the surnames of people of Ukrainian ancestry in English-speaking countries (personal names have often been translated to equivalent or similar English names, e.g., "Alexander" for Oleksandr, "Terry" for Taras).

Typically such a modified transliteration is based on the ALA-LC, or Library of Congress (in North America), or, less commonly, the British Standard system. Such a simplified system usually omits diacritics and ligatures (tie-bars) from, e.g., i͡e, ï or ĭ, often simplifies -yĭ and -iĭ word endings to "-y", omits romanizing the Ukrainian soft sign (ь) and apostrophe ('), and may substitute ya, ye, yu, yo for ia, ie, iu, io at the beginnings of words. It may also simplify doubled letters. Unlike in the English language where an apostrophe is punctuation, in the Ukrainian language it is a letter. Therefore sometimes Rus' is translated with an apostrophe, even when the apostrophe is dropped for most other names and words.

The employment of romanization systems can become complex. For example, the English translation of Kubijovyč's Ukraine: A Concise Encyclopædia uses a modified Library of Congress (ALA-LC) system as outlined above for Ukrainian and Russian names—with the exceptions for endings or doubled consonants applying variously to personal and geographic names. For technical reasons, maps in the Encyclopedia follow different conventions. Names of persons are anglicized in the encyclopedia's text, but also presented in their original form in the index. Various geographic names are presented in their anglicized, Russian, or both Ukrainian and Polish forms, and appear in several forms in the index. Scientific transliteration is used in linguistics articles. The Encyclopedia's explanation of its transliteration and naming convention occupies 2-1/2 pages.[27]

Retrieved from "http://en.turkcewiki.org/w/index.php?title=Romanization_of_Ukrainian&oldid=1023044123"
This website is a mirror of Wikipedia, and is not affiliated with the Wikimedia Foundation.
Categories:
Hidden categories: