Rohit Khosla (29 November 1958 – 16 February 1994) was a pioneer of contemporary fashion industry in India.[1] Khosla studied in England, worked with designers in New York, but returned to India to start his own label in 1987, along with his sister, designer Rohini Khosla.

Born in November 1958 to Usha and Kamal Khosla in an affluent punjabi family, Rohit had always dreamed of becoming a fashion pioneer. An alumnus of The Doon School in Dehradun , he took a foundation course in art and then followed it by studying fashion at Kingston University. In college, his contemporaries were Nick Coleman, John Richmond and Helen Storey.[2] He is quoted in his biography Vanguard, penned by Rohini Khosla, Studying in England was pure bliss -- ideas just flowing, fabrics everywhere and fashion obsessive people all around me. He entered the Indian fashion scene when it was still a nascent industry [3] and left his hallmark.[4]

In those days, it was considered a bold step to enter fashion, especially when one had such a high-profile qualification. Rohit Khosla was the first Indian fashion designer to launch a haute couture label.

His family was extremely supportive of his fashion career. In his short life, Khosla spearheaded major contributions to the Indian fashion industry. 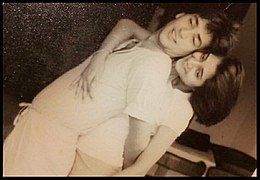 In 1998, Rohini Khosla published a book on his life and work, titled Rohit Khosla, Vanguard.[9] In 2007 the India Fashion Week paid a tribute to him, with designers like Rohit Bal dedicating his collection to him.[12][13]

Retrieved from "http://en.turkcewiki.org/w/index.php?title=Rohit_Khosla&oldid=1052246109"
This website is a mirror of Wikipedia, and is not affiliated with the Wikimedia Foundation.
Categories:
Hidden categories: