Attempts at capture of regulatory agencies to gain a coercive monopoly can result in advantages for rent-seekers in a market while imposing disadvantages on their incorrupt competitors. This is one of many possible forms of rent-seeking behavior.

The term rent-seeking was coined by the British 19th-century economist David Ricardo, but only became the subject of durable interest among economists and political scientists more than a century later after the publication of two influential papers on the topic by Gordon Tullock in 1967,[3] and Anne Krueger[4] in 1976. The word "rent" does not refer specifically to payment on a lease but rather to Adam Smith's division of incomes into profit, wage, and rent. The origin of the term refers to gaining control of land or other natural resources.

Georgist economic theory describes rent-seeking in terms of land rent, where the value of land largely comes from government infrastructure and services (e.g. roads, public schools, maintenance of peace and order, etc.) and the community in general, rather than from the actions of any given landowner, in their role as mere titleholder. This role must be separated from the role of a property developer, which need not be the same person.

Rent-seeking is an attempt to obtain economic rent (i.e., the portion of income paid to a factor of production in excess of what is needed to keep it employed in its current use) by manipulating the social or political environment in which economic activities occur, rather than by creating new wealth. Rent-seeking implies extraction of uncompensated value from others without making any contribution to productivity.

In many market-driven economies, much of the competition for rents is legal, regardless of harm it may do to an economy. However, various rent-seeking behaviors are illegal, mostly through bribery of local and federal politicians, or corruption.

Rent-seeking is distinguished in theory from profit-seeking, in which entities seek to extract value by engaging in mutually beneficial transactions.[5] Profit-seeking in this sense is the creation of wealth, while rent-seeking is "profiteering" by using social institutions, such as the power of the state, to redistribute wealth among different groups without creating new wealth.[6] In a practical context, income obtained through rent-seeking may contribute to profits in the standard, accounting sense of the word.

The Tullock paradox is the apparent paradox, described by economist Gordon Tullock, on the low costs of rent-seeking relative to the gains from rent-seeking.[7][8]

The paradox is that rent-seekers wanting political favors can bribe politicians at a cost much lower than the value of the favor to the rent-seeker. For instance, a rent seeker who hopes to gain a billion dollars from a particular political policy may need to bribe politicians only to the tune of ten million dollars, which is about 1% of the gain to the rent-seeker. Luigi Zingales frames it by asking, "Why is there so little money in politics?" because a naive model of political bribery and/or campaign spending should result in beneficiaries of government subsidies being willing to spend an amount up to the value of the subsidies themselves, when in fact only a small fraction of that is spent.[9]

Several possible explanations have been offered for the Tullock paradox:[10] 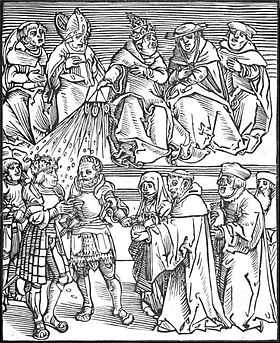 Antichristus,[11] a woodcut by Lucas Cranach the Elder, of the pope using the temporal power to grant authority to a ruler contributing generously to the Catholic Church

The classic example of rent-seeking, according to Robert Shiller, is that of a property owner who installs a chain across a river that flows through his land and then hires a collector to charge passing boats a fee to lower the chain. There is nothing productive about the chain or the collector. The owner has made no improvements to the river and is not adding value in any way, directly or indirectly, except for himself. All he is doing is finding a way to make money from something that used to be free.[12]

An example of rent-seeking in a modern economy is spending money on lobbying for government subsidies in order to be given wealth that has already been created, or to impose regulations on competitors, in order to increase market share.[13] Another example of rent-seeking is the limiting of access to lucrative occupations, as by medieval guilds or modern state certifications and licensures. According to some libertarian perspectives, Taxi licensing is a textbook example of rent-seeking.[14] To the extent that the issuing of licenses constrains overall supply of taxi services (rather than ensuring competence or quality), forbidding competition from other vehicles for hire renders the (otherwise consensual) transaction of taxi service a forced transfer of part of the fee, from customers to taxi business proprietors.

The concept of rent-seeking would also apply to corruption of bureaucrats who solicit and extract "bribe" or "rent" for applying their legal but discretionary authority for awarding legitimate or illegitimate benefits to clients.[15] For example, tax officials may take bribes for lessening the tax burden of the taxpayers.

Regulatory capture is a related term for the collusion between firms and the government agencies assigned to regulate them, which is seen as enabling extensive rent-seeking behavior, especially when the government agency must rely on the firms for knowledge about the market. Studies of rent-seeking focus on efforts to capture special monopoly privileges such as manipulating government regulation of free enterprise competition.[16] The term monopoly privilege rent-seeking is an often-used label for this particular type of rent-seeking. Often-cited examples include a lobby that seeks economic regulations such as tariff protection, quotas, subsidies,[17] or extension of copyright law.[18] Anne Krueger concludes that "empirical evidence suggests that the value of rents associated with import licenses can be relatively large, and it has been shown that the welfare cost of quantitative restrictions equals that of their tariff equivalents plus the value of the rents".[4]

Economists such as the former chair of British financial regulator the Financial Services Authority Lord Adair Turner have argued that innovation in the financial industry is often a form of rent-seeking.[19][20]

The phenomenon of rent-seeking in connection with monopolies was first formally identified in 1967 by Gordon Tullock.[21]

A 2013 study by the World Bank showed that the incentives for policy-makers to engage in rent-provision is conditional on the institutional incentives they face, with elected officials in stable high-income democracies the least likely to indulge in such activities vis-à-vis entrenched bureaucrats and/or their counterparts in young and quasi-democracies.[22]

Writing in The Review of Austrian Economics, Ernest C. Pasour says that there may be difficulties distinguishing between beneficial profit-seeking and detrimental rent-seeking.[23]

From a theoretical standpoint, the moral hazard of rent-seeking can be considerable. If "buying" a favorable regulatory environment seems cheaper than building more efficient production, a firm may choose the former option, reaping incomes entirely unrelated to any contribution to total wealth or well-being. This results in a sub-optimal allocation of resources – money spent on lobbyists and counter-lobbyists rather than on research and development, on improved business practices, on employee training, or on additional capital goods – which slows economic growth. Claims that a firm is rent-seeking therefore often accompany allegations of government corruption, or the undue influence of special interests.[24]

Government agents may initiate rent-seeking – such agents soliciting bribes or other favors from the individuals or firms that stand to gain from having special economic privileges, which opens up the possibility of exploitation of the consumer.[26] It has been shown that rent-seeking by bureaucracy can push up the cost of production of public goods.[27] It has also been shown that rent-seeking by tax officials may cause loss in revenue to the public exchequer.[15]

Mançur Olson traced the historic consequences of rent seeking in The Rise and Decline of Nations. As a country becomes increasingly dominated by organized interest groups, it loses economic vitality and falls into decline. Olson argued that countries that have a collapse of the political regime and the interest groups that have coalesced around it can radically improve productivity and increase national income because they start with a clean slate in the aftermath of the collapse. An example of this is Japan after World War Two. But new coalitions form over time, once again shackling society in order to redistribute wealth and income to themselves. However, social and technological changes have allowed new enterprises and groups to emerge.[28]

A study by Laband and John Sophocleus in 1988[29] estimated that rent-seeking had decreased total income in the US by 45 percent. Both Dougan and Tullock affirm the difficulty of finding the cost of rent-seeking. Rent-seekers of government-provided benefits will in turn spend up to that amount of benefit in order to gain those benefits, in the absence of, for example, the collective-action constraints highlighted by Olson. Similarly, taxpayers lobby for loopholes and will spend the value of those loopholes, again, to obtain those loopholes (again absent collective-action constraints). The total of wastes from rent-seeking is then the total amount from the government-provided benefits and instances of tax avoidance (valuing benefits and avoided taxes at zero). Dougan says that the "total rent-seeking costs equal the sum of aggregate current income plus the net deficit of the public sector".[30]

The Nobel Memorial Prize-winning economist Joseph Stiglitz has argued that rent-seeking contributes significantly to income inequality in the United States through lobbying for government policies that let the wealthy and powerful get income, not as a reward for creating wealth, but by grabbing a larger share of the wealth that would otherwise have been produced without their effort.[32][33] Thomas Piketty, Emmanuel Saez, and Stefanie Stantcheva have analyzed international economies and their changes in tax rates to conclude that much of income inequality is a result of rent-seeking among wealthy tax payers.[34]

Retrieved from "http://en.turkcewiki.org/w/index.php?title=Rent-seeking&oldid=1018802356"
This website is a mirror of Wikipedia, and is not affiliated with the Wikimedia Foundation.
Categories:
Hidden categories: