Renee Danielle Montgomery (born December 2, 1986) is a retired American basketball player and sports broadcaster who is currently vice president, part-owner, and investor of the Atlanta Dream, and one of three owners of the FCF Beasts Indoor Football Team. During her 11-year playing career in the Women's National Basketball Association, she won two championships with the Minnesota Lynx in 2015 and 2017. During her college playing career, she won a national championship with the UConn Huskies in 2009.[1]

Montgomery was a high school teammate of fellow future WNBA player Alexis Hornbuckle at South Charleston High School, where she was a captain each year of her high school career. She led the school to the West Virginia state Championships three times, averaging 22.5 points, six assists, five rebounds and five steals while leading the school to the West Virginia Class AAA Final as a senior. She also played on the varsity soccer team.[1]

She attended the University of Connecticut.

Montgomery started in all 36 games as the Huskies' point guard. She tallied double-figure points in 29 games, including four 20-point plus scoring efforts. Montgomery led the team with a 13.3 scoring average and 163 assists. She was named first team All-Big East. In addition, Montgomery led the USA U-20 National Team to a gold medal during the summer prior to the start of the season at the FIBA U-20 Championship for Women in Mexico City.[1]

Montgomery was selected as an All-Big East First Team choice for the second consecutive season. She was also selected to the All-Big East Tournament Team for the third consecutive season. Montgomery moved to the shooting guard slot on January 19, following a season-ending injury to Mel Thomas, after playing the majority of her career at point guard. She passed the 1,000 point mark in an 82–71 UConn win over North Carolina on January 21, 2008 at Gampel Pavilion. The Huskies lost in the Final Four to Stanford and finished the season at 36–2.[1]

Sports Illustrated did a series of thirteen photographs featuring teams chasing or achieving perfect seasons—an entire season without a loss. The photograph of Coach Geno Auriemma embracing Renee Montgomery during the 2008–09 season is included in the collection.[4]

Montgomery during the WNBA Finals in 2017

Montgomery was selected fourth overall in the 2009 WNBA Draft by the Minnesota Lynx.[5]

In 2010, Montgomery was traded to the Connecticut Sun, as part of a trade involving Minnesota native Lindsay Whalen and the first pick in the 2010 draft, with which the Sun selected Tina Charles, Montgomery's former college teammate.[6] In college, Montgomery wore 20 as a uniform number. Players often become attached to their numbers, some more than others. Renee liked her number so much that her personal website is reneemontgomery20.com.[7] The Sun also added veteran Kara Lawson to the team, who had worn No. 20 in college and with the Sacramento Monarchs, so Montgomery wore No. 21 for the Sun.[8]

During the 2009–10 collegiate basketball season, Montgomery occasionally worked as a color commentator for women's college games broadcast on the ESPN family of networks.

During the 2011 WNBA season, Montgomery had the best season of her career once she became the starting point guard for the Sun. She averaged 14.6 ppg and was voted as an all-star for the first time in her career.

In 2012, Montgomery came off the bench for the Sun, but was still effective, averaging 11.6 ppg and winning WNBA Sixth Woman of the Year. The Sun made it to the playoffs that year and were one win away from advancing to the Finals, but were eliminated by the eventual champions Indiana Fever in game 3 of the Eastern Conference Finals.

On January 28, 2015, the Connecticut Sun traded Montgomery along with their third and fifteen overall picks in the 2015 WNBA draft to the Seattle Storm in exchange for Camille Little and Shekinna Stricklen.[9]

On July 20, 2015, Montgomery was reacquired by the Minnesota Lynx in a trade for Monica Wright.[10] Montgomery ended up winning her first WNBA championship with the Lynx after they defeated the Indiana Fever in the Finals.

In 2016, Montgomery played a full season for the Lynx for the first time since her rookie season. She averaged 7.5 ppg off the bench and the Lynx were in the hunt to win back-to-back championships, but lost to the Los Angeles Sparks in the Finals.

In 2017, Montgomery averaged 8.0 ppg and achieved a new career-high in field goal shooting percentage. Montgomery also started in 12 of 34 games played while Whalen was sidelined with a hand injury. The Lynx continued to be a championship contender in the league after making it to the Finals for the sixth time in seven seasons, setting up a rematch with the Sparks. This time the Lynx would win in 5 games, winning their fourth championship in seven seasons, tying the now-defunct Houston Comets for most championship titles.

In June 2020, Montgomery announced that she would forgo the 2020 WNBA season due to concerns of racism and the coronavirus.[13] In February 2021, she announced her retirement from the WNBA.[2] 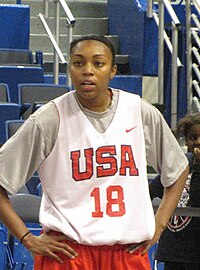 Montgomery was invited to the USA Basketball Women's National Team training camp in the fall of 2009. The team selected to play for the FIBA World Championship and the Summer Olympics is usually chosen from these participants.[15]

At the conclusion of the training camp, the team traveled to Ekaterinburg, Russia, where they competed in the 2009 UMMC Ekaterinburg International Invitational.[15]

Montgomery was one of twenty players named to the national team pool, from which twelve players would be chosen to represent the US in the 2010 FIBA World Championships and the 2012 Olympics.[16]

In February 2021, Montgomery was part of a three-member investor group that was approved to purchase the Atlanta Dream. The ownership change followed pressure on former owner Kelly Loeffler, a Republican former U.S. Senator who had angered WNBA players with her opposition to the league's racial justice initiatives, to sell her share of the Dream.[21][22][23][24] Loeffler had previously refused a visit with Montgomery on social justice initiatives.[21][24]

On January 4, 2021, Montgomery joined Miro and Marshawn Lynch as a partial owner of the FCF Beasts of Fan Controlled Football.[25]

In 2020, Montgomery began working as a studio analyst for Fox Sports Southeast's broadcasts of Atlanta Hawks games. She had previously appeared on the network as a guest analyst.[23]

In March 2021, Montgomery was announced as the co-host of a Crooked Media podcast titled Takeline with Jason Concepcion.[26]

In September 2021, Montgomery joined Meadowlark Media, for which she makes the podcast Montgomery & Co..[28]

Retrieved from "http://en.turkcewiki.org/w/index.php?title=Renee_Montgomery&oldid=1082713093"
This website is a mirror of Wikipedia, and is not affiliated with the Wikimedia Foundation.
Categories:
Hidden categories: