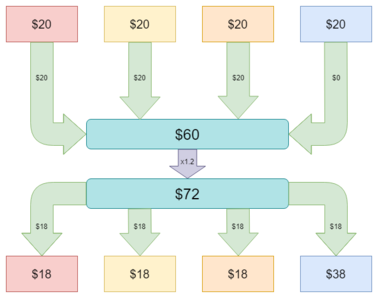 In this diagram of a public goods game, three players choose to contribute their full $20 while the fourth player chooses to contribute $0. The $60 is multiplied by a factor of 1.2 and the resulting $72 is distributed equally among the four players.

The public goods game is a standard of experimental economics. In the basic game, subjects secretly choose how many of their private tokens to put into a public pot. The tokens in this pot are multiplied by a factor (greater than one and less than the number of players, N) and this "public good" payoff is evenly divided among players. Each subject also keeps the tokens they do not contribute.

The group's total payoff is maximized when everyone contributes all of their tokens to the public pool. However, the Nash equilibrium in this game is simply zero contributions by all; if the experiment were a purely analytical exercise in game theory it would resolve to zero contributions because any rational agent does best contributing zero, regardless of whatever anyone else does. This only holds if the multiplication factor is less than the number of players, otherwise, the Nash equilibrium is for all players to contribute all of their tokens to the public pool.[1]

In fact, the Nash equilibrium is rarely seen in experiments; people do tend to add something into the pot. The actual levels of contribution found varies widely (anywhere from 0% to 100% of initial endowment can be chipped in).[2] The average contribution typically depends on the multiplication factor.[3] Capraro has proposed a new solution concept for social dilemmas, based on the idea that players forecast if it is worth to act cooperatively and then they act cooperatively in a rate depending on the forecast. His model indeed predicts increasing level of cooperation as the multiplication factor increases.[4]

"Repeat-play" public goods games involve the same group of subjects playing the basic game over a series of rounds. The typical result is a declining proportion of public contribution, from the simple game (the "One-shot" public goods game). When trusting contributors see that not everyone is giving up as much as they do they tend to reduce the amount they share in the next round.[5][6] If this is again repeated the same thing happens but from a lower base, so that the amount contributed to the pot is reduced again. However, the amount contributed to the pool rarely drops to zero when rounds of the game are iterated, because there tends to remain a hardcore of ‘givers’.

One explanation for the dropping level of contribution is inequity aversion. During repeated games, players learn their co-players inequality aversion in previous rounds on which future beliefs can be based. If players receive a bigger share for a smaller contribution the sharing members react against the perceived injustice (even though the identity of the “free riders” are unknown, and it's only a game).[7] Those who contribute nothing in one round, rarely contribute something in later rounds, even after discovering that others are.

Transparency about past choices and payoffs of group members affects future choices. Studies show individuals in groups can be influenced by the group leaders, whether formal or informal, to conform or defect. Players signal their intentions through transparency which allows “conditional operators” to follow the lead.[8] If players are informed of individual payoffs of each member of the group it can lead to a dynamic of players adopting the strategy of the player who benefited the most (contributed the least) in the group. This can lead a drop in cooperation through subsequent iterations of the game.[9] However, if the amount contributed by each group member is not hidden, the amount contributed tends to be significantly higher.[10] The finding is robust in different experiment designs: Whether in "pairwise iterations" with only two players (the other player's contribution level is always known) or in nominations after the end of the experiment.

The option to punish non-contributors and to reward the highest contributions after a round of the public goods game has been the issue of many experiments. Findings strongly suggest that non-rewarding is not seen as a sanction, while rewards don't substitute punishment. Rather they are used completely differently as a means to enforce cooperation and higher payoffs.

Punishing is exercised, even at a cost, and in most experiments it leads to greater group cooperation.[11] However, since punishment is costly, it tends to lead to (marginally) lower payoffs, at least initially.[12] On the other hand, a 2007 study found that rewards alone could not sustain long-term cooperation.[13]

Many studies, therefore, emphasize the combination of (the threat of) punishment and rewards. The combination seems to yield both a higher level of cooperation and payoffs. This holds for iterated games in changing groups[11][13] as well as in identical groups.[12]

Asymmetric cost and or benefit functions have a direct influence on the contribution behaviour of agents. When confronted with different payoff returns to their contributions, agents behave differently though they still contribute more than in Nash equilibrium.[6]

A public goods games variant suggested as an improvement for researching the free-rider problem is one in which endowment are earned as income. The standard game (with a fixed initial endowment) allows no work effort variation and cannot capture the marginal substitutions among three factors: private goods, public goods, and leisure.[14]

Researchers have found that in an experiment where an agent's wealth at the end of period t serves as her endowment in t+1, the amounts contributed increase over time even in the absences of punishment strategies.[15]

A different framing of the original neutral experiment setting induces players to act differently because they associate different real-life situations. For example, a public good experiment could be presented as a climate negotiation or as contributions to private parties.

The effect of associations (label frame) depends on the experience pool the player made with similar real-life frames. This is especially true for one-shot (not iterated) games where players can only infer others’ behaviour and expectations from their life experiences. Therefore, the same frame can induce more and also less contribution, even in similar cultures. Label frames move beliefs i.e. about other player's behaviour, and these beliefs subsequently shape motivation and choice.[16]

For contribution to be privately "irrational" the tokens in the pot must be multiplied by an amount smaller than the number of players and greater than 1. Other than this, the level of multiplication has little bearing on strategy, but higher factors produce higher proportions of contribution.

The name of the game comes from economist’s definition of a “public good”. One type of public good is a costly, "non-excludable" project that everyone can benefit from, regardless of how much they contribute to create it (because no one can be excluded from using it - like street lighting). Part of the economic theory of public goods is that they would be under-provided (at a rate lower than the ‘social optimum’) because individuals had no private motive to contribute (the free rider problem). The “public goods game” is designed to test this belief and connected theories of social behaviour.

Inequality in the Public Goods game[edit]

Previous studies on public goods games have explored the effect inequality in endowment have on the contributions made by individuals. The effects of inequality cause some individuals to shirk[disambiguation needed] and free-ride on the other players of the game. This has far-reaching consequences for the equality of wealth in the game.[19] The evidence provided from studies is that often contributions are lower when there is inequality[disambiguation needed] in endowment.

Through another lens, inequality[disambiguation needed] influences the contributions that individuals are making to the game. A study demonstrated that the inequality in endowment and contributions creates an asymmetry of punishment in the game, which introduced an asymmetry in power for players. This has further applications to modern-day workplace arrangements and notably, the issue of shirking in group projects

Shirking in the Public Goods game[edit]

Shirking in the Public Goods game may arise through an asymmetry in power created by the punishment in the game. An additional influence in this is the role of inequality[disambiguation needed] in wealth in the Public goods games. In this, an individual may shirk and use their higher wealth to punish the group members with lower wealth.[20] Their goal from this is to increase their own wealth and gains from their decisions. Shirking is evident in many workplace arrangements and is studied in the field of managerial economics.

The empirical fact that subjects in most societies contribute anything in the simple public goods game is a challenge for game theory to explain via a motive of total self-interest, although it can do better with the ‘punishment’ variant or the ‘iterated’ variant; because some of the motivation to contribute is now purely “rational” if players assume that others may act irrationally and punish them for non-contribution.

The Public Goods Game explores the role of an Incentive in decisions and the actions of players. An application of this is incentives and how workers respond to different projects. These incentives may extend to institutional incentives, including bonuses and financial rewards.[21] An application of this is workforce incentives for team projects. The Public Goods Game is relevant to this situation as it analyses the contribution employees are willing to make to team projects when there is an incentive to contribute. Resultant of this incentive, the public goods hame may create punishments for individuals who do not contribute effectively.

The sociological interpretation of these results emphasizes group cohesion and cultural norms to explain the "prosocial" outcomes of public goods games.

Previous studies have demonstrated the role of behavioural economics - particularly personality traits- and their influence on player's behaviour. However, minimal studies are investigating the role of rationality in player's decision making. Applying rational choice theory to public goods games offers benefits in understanding the contributions players are willing to make and the trends that arise across players and their behaviour. A study that explored this found that rationality has a statistically significant effect on the public goods game. Furthermore, the study found that rational individuals are more likely to contribute fewer resources to public goods.[22]

Incentives in the Public Goods game[edit]

Incentives are fundamental in the Public Goods games as they provide an opportunity to understand the decisions and actions of the players. Examples of incentives may include financial, economic, and incentives or negative responses such as punishment. The type of incentive offered varies across organisations. An example includes donations made to support a corporate social responsibility initiative of a company.[24]

Retrieved from "http://en.turkcewiki.org/w/index.php?title=Public_goods_game&oldid=1021248762"
This website is a mirror of Wikipedia, and is not affiliated with the Wikimedia Foundation.
Categories:
Hidden categories: