About one quarter of its population of 463,746 (2018) lives in the capital, León. The climate is dry, cold in winter and hot in summer. This creates the perfect environment for wine and all types of cold meats and sausages like the leonese “Morcilla” and the “Cecina”.

The province of León was established in 1833 with the new Spanish administrative organisation of regions and provinces to replace former kingdoms. The Leonese Region was composed of the provinces of León, Salamanca and Zamora.

Until 1833, the independently administered Kingdom of León, situated in the northwest region of the Iberian Peninsula, retained the status of a kingdom, although dynastic union had brought it into the Crown of Castile. The Kingdom of León was founded in 910 A.D. when the Christian princes of Asturias along the northern coast of the peninsula shifted their main seat from Oviedo to the city of León. The Atlantic provinces became the Kingdom of Portugal in 1139.

The eastern, inland part of the kingdom was joined dynastically to the Kingdom of Castile first in 1037–1065, again 1077–1109 and 1126–1157, 1230–1296 and from 1301 onward. (See Castile and León#Historic union of the Kingdoms of Castile and León.) León retained the status of a kingdom until 1833, being composed by Adelantamientos Mayores, where Leonese Adelantamiento consisted of the territories between the Picos de Europa and the Duero River.

According to UNESCO, in 1188 the Kingdom of León developed the first Parliament in Europe.[1][2] In 1202 its parliament approved economic legislation to regulate trade and guilds.

The historical population is given in the following chart: 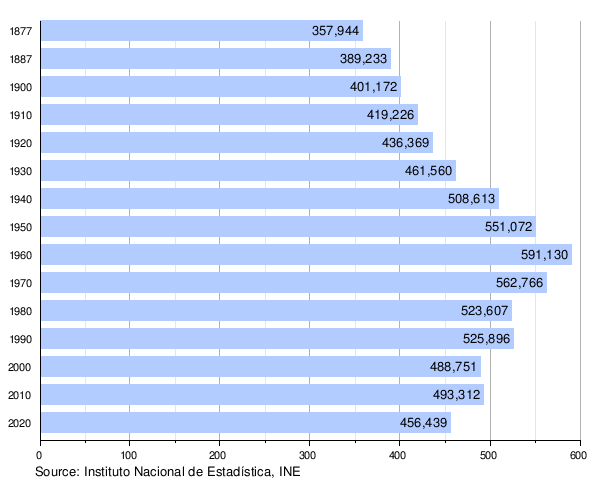 In the western part of the El Bierzo, the westernmost region of the province, Galician language is spoken and taught at schools.[citation needed] 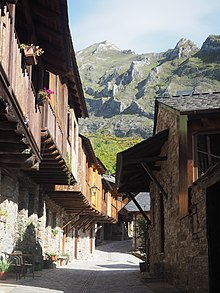 As for the temperatures, in general it is a cold climate due to the altitude and the abundance of frost (which persist from November to May), being more intense in the mountainous areas reaching -18 °C. Vega de Liordes, an enclave in the León sector of Picos de Europa belonging to the municipality of Posada de Valdeón registered −35.8 °C (−32.4 °F) on January 7, 2021.[3][4]

Wikimedia Commons has media related to Province of León.
Portal:
Retrieved from "http://en.turkcewiki.org/w/index.php?title=Province_of_León&oldid=1115514819"
This website is a mirror of Wikipedia, and is not affiliated with the Wikimedia Foundation.
Categories:
Hidden categories: