Jump to navigation Jump to search
This article is about the Appalachian ridge. For the mountain in Nevada, see Powell Mountain (Mineral County, Nevada). For other uses, see Mount Powell (disambiguation).

Powell Mountain (or "Powells Mountain") is a mountain ridge of the Ridge-and-valley Appalachians of the Appalachian Mountains. It is a long and narrow ridge, running northeast to southwest, from about Norton, Virginia to near Tazewell, Tennessee.[1] It separates the Clinch River basin and the Powell River basin of Powell Valley. It was named for an 18th-century explorer.[2]

Powell Mountain is about 60 miles (97 km) long. It is broken by one stream only, the North Fork Clinch River. North of the river, the mountain is less well-defined as a ridge and merges with Stone Mountain and other mountains near the headwaters of Powell River.

The southern part of Powell Mountain is paralleled on the south by Newman Ridge and Stone Ridge. Between Powell Mountain and these ridges is Snake Hollow and the headwaters of Blackwater Creek. This area is known for its historic Melungeon population. 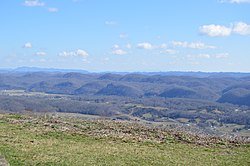 Scenery from U.S. Route 58 at the summit, Scott County, Virginia

Powell Mountain's southern end is in Claiborne County, Tennessee. On the north side of the mountain flows Little Sycamore Creek, and on the south side, Big Sycamore Creek. The two join just south of the end of Powell Mountain, then flowing into the Clinch River and Norris Lake (the reservoir behind Norris Dam).

Powell Mountain continues on the other side of the North Fork Clinch River, but is less well-defined as a ridge. It blends somewhat with Cliff Mountain, Little Mountain, and Stone Mountain. Near Cliff Mountain is the high summit of Bowling Knob (3,557 feet (1,084 m)).

The northern part of Powell Mountain is in Jefferson National Forest.

Retrieved from "http://en.turkcewiki.org/w/index.php?title=Powell_Mountain&oldid=1050560801"
This website is a mirror of Wikipedia, and is not affiliated with the Wikimedia Foundation.
Categories:
Hidden categories: