Shortcuts
The United States of America is a federal republic of 50 states, a capital district, and a number of other territories. It is located mostly in central North America. The U.S. has three land borders, two with Canada and one with Mexico, and is otherwise bounded by the Pacific Ocean, the Bering Sea, the Arctic Ocean and the Atlantic Ocean. Of the 50 states, only Alaska and Hawaii are not contiguous with any other state. The U.S. also has a collection of districts, territories, and possessions in the Caribbean Sea and Pacific Ocean. Each state has a high level of autonomy according to the system of federalism. The U.S. traces its national origin to the declaration by 13 British colonies in 1776 that they were free and independent states. They were recognized as such by the Treaty of Paris in 1783. Since then, the nation has grown to become a global superpower and exerts a high level of economic, political, military, and cultural influence.

More about the United States, its history and diversity
Refresh with new selections below (purge)

Samuel Adams (September 27 [O.S. September 16] 1722 – October 2, 1803) was an American statesman, politician, writer and political philosopher, brewer, and one of the Founding Fathers of the United States. Adams was instrumental in garnering the support of the colonies for rebellion against Great Britain, eventually resulting in the American Revolution, and was also one of the key architects of the principles of American republicanism that shaped American political culture.

Born in Boston, Massachusetts, Adams was brought up in a religious and politically active family. After being educated at Boston Latin School and Harvard College, Adams became a mercantile businessman, but this proved not to be his vocation and he soon turned to politics, and became an influential political writer and theorist. Adams established himself as one of the voices of opposition to British control in the colonies; he argued that the colonies should withdraw from Great Britain and form a new government. Adams called for the colonists to defend their rights and liberties, and led town meetings in which he drafted written protests against Parliament's colonial tax measures such as the Stamp Act of 1765. Adams played a prominent role during protests against the Stamp Act, and in the events of the Boston Tea Party in 1773. He participated in the Continental Congress. He also advocated the adoption of the Declaration of Independence at the Second Continental Congress.

William Bradley "Brad" Pitt (born December 18, 1963) is an American actor and film producer. Pitt has received two Academy Award nominations and four Golden Globe Award nominations, winning one. He has been described as one of the world's most attractive men, a label for which he has received substantial media attention.

Following a high-profile relationship with actress Gwyneth Paltrow, Pitt was married to actress Jennifer Aniston for five years. Pitt currently lives with actress Angelina Jolie in a relationship that has generated wide publicity. He and Jolie have six children—Maddox, Zahara, Pax, Shiloh, Knox, and Vivienne. Since beginning his relationship with Jolie, he has become increasingly involved in social issues both in the United States and internationally. Pitt owns a production company named Plan B Entertainment, whose productions include the 2007 Academy Award winning Best Picture, The Departed. 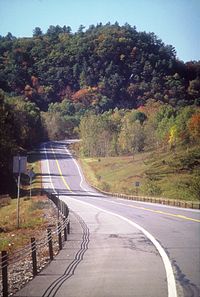 New York State Route 22 (NY 22) is a north–south state highway in eastern New York in the United States. It runs parallel to the state's eastern edge from the outskirts of New York City to a short distance south of the Canada–US border. At 341 miles (549 km), it is the state's longest north–south route and the third longest overall, after NY 5 and NY 17.[a] Many of the state's major east–west roads intersect with Route 22 just before crossing the state line into the neighboring New England states.

The southernmost section of the road was known as the White Plains Post Road in the eighteenth and nineteenth centuries, a major highway connecting New York City to White Plains, the Westchester county seat. Route 22 in its modern form was established in 1930 as one of the principal routes from New York City to Canada.

The centerpiece of contemporary Thanksgiving in the United States and in Canada is Thanksgiving dinner (informally called turkey dinner), a large meal generally centered on a large roasted turkey. Thanksgiving could be considered the largest eating event in the United States as measured by retail sales of food and beverages and by estimates of individual food intake. People often consume as much as three or four thousand calories during the course of the dinner. (Full article...)
edit

Discover Wikipedia using portals
Purge server cache
Retrieved from "http://en.turkcewiki.org/w/index.php?title=Portal:United_States&oldid=1113650400"
This website is a mirror of Wikipedia, and is not affiliated with the Wikimedia Foundation.
Categories:
Hidden categories: