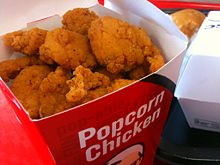 Popcorn chicken is a dish consisting of small, bite-sized pieces of chicken that have been breaded and fried. The idea was originally developed by KFC but has since spread.

Popcorn chicken was invented by food technologist Gene Gagliardi.[1] It was test-marketed in the United States from March 1992, and had been launched nationwide by September of that year.[1] It has been periodically available in KFC outlets. It was re-introduced in the US in 1998, and again in 2001.[2] It was later re-introduced once again in 2015, under the name "KFC Popcorn Nuggets".[citation needed]

The product is targeted at teenagers and young adults.[9]

Retrieved from "http://en.turkcewiki.org/w/index.php?title=Popcorn_chicken&oldid=1032172303"
This website is a mirror of Wikipedia, and is not affiliated with the Wikimedia Foundation.
Categories:
Hidden categories: