Pomfret is a town in Windham County, Connecticut, United States. The population was 4,247 in 2010 according to the United States Census. The land was purchased from Native Americans in 1686 (the "Mashmuket Purchase" or "Mashamoquet Purchase") and the town was incorporated in 1713 and named after Pontefract in West Yorkshire, England.[1] 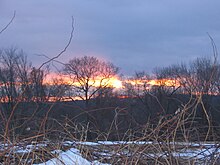 Mashamoquet State Park and Wolf Den State Park are both located in Pomfret, near the intersection of US 44 and CT 101. Wolf Den State Park is the alleged site of General Israel Putnam's slaying of the last wolf in Connecticut. Rocky paths connect join the small cave which is the actual wolf den with a glacially positioned boulder called the Indian Chair. Camping and cook-out facilities are available for a nominal fee.

The Air Line Trail, a former railroad bed, joins the town of Pomfret with its neighbor to the east, Putnam. The Airline Trail runs seven miles (11 km), much of it through an Audubon Society property named the Bafflin Sanctuary, a 700-acre (2.8 km2) nature preserve. 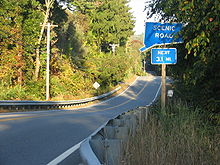 Pomfret has no formal town center due to the town's significant southward expansion after its establishment, first around Mortlake, later absorbing that town. The town office is located on US Route 44. The Congregational Church, until its destruction by fire on December 7, 2013, stood on the eastern edge of the old town green on Pomfret Hill, across from the Pomfret School, a college preparatory school founded in 1894. About a mile north of the Congregational Church site is Christ Episcopal Church, which contains several windows designed and constructed by Louis Comfort Tiffany. Across from Christ Church on the west side of Route 44 is the Rectory School,[2] founded in 1920. At the divergence point of US 44 and CT 169 is Most Holy Trinity Roman Catholic Church.

Town House Road is the location of the historic Pomfret Town House, built in 1841 at a location chosen by a committee of Selectmen from neighboring towns when Pomfret citizens could not agree on a location; it is listed on the National Register. Pomfret First Church was established in today's Pomfret Hill area; Pomfret Second Church covered what is largely today's Town of Brooklyn; while Pomfret Third Church was established in today's Abington area.

See also: List of Connecticut locations by per capita income

Major firms in Pomfret include:

Pomfret residents are zoned to the Pomfret Community School for grades Kindergarten through 8. Pomfret students are eligible to attend Woodstock Academy,[6] which became Pomfret's zoned high school in 1987[7]

Two private schools, the Pomfret School and the Rectory School, are also located in Pomfret.

Other properties listed on the National Register in the town are:

Retrieved from "http://en.turkcewiki.org/w/index.php?title=Pomfret,_Connecticut&oldid=1027865409"
This website is a mirror of Wikipedia, and is not affiliated with the Wikimedia Foundation.
Categories:
Hidden categories: