Polk County is a county located in the southeastern corner of the U.S. state of Tennessee. As of the 2020 United States census, its population was 17,544.[2] Its county seat is Benton.[3] The county was created on November 28, 1839, from parts of Bradley and McMinn counties, after final removal of most Cherokee from the region that year. The county was named after then-governor (and future president) James K. Polk. Polk County is included in the Cleveland, Tennessee Metropolitan Area Statistical Area, which is also included in the Chattanooga–Cleveland–Dalton, TN–GA–AL Combined Statistical Area.

Prior to the settlement of the Europeans, Polk County was inhabited by the Cherokee, and before them, thousands of years of indigenous cultures. The portion of Polk County north of the Hiwassee River was ceded by the Cherokee Nation to the US in the Calhoun Treaty of 1819. The rest of the county was part of the Ocoee District. The Cherokee were forcibly removed from here in 1838-1839 and taken to Indian Territory, in a passage that became known as the Trail of Tears.[1]

Polk County was created by an act of the Tennessee General Assembly on November 23, 1839. The location for the county seat of Benton was chosen by an election held on February 4, 1840.[1]

Copper was discovered in Ducktown in 1843. By the 1850s, a large mining operation was underway in southeastern Polk County; the area became known as the Copper Basin. This operation continued until 1987, when the last mine closed.

During the Civil War, Polk County was one of only six counties in East Tennessee to support the Confederacy, voting in favor of Tennessee's ordinance of secession in June 1861. During the war, the copper mines supplied about 90% of the Confederacy's copper; their capture by Union forces after the Confederate defeat at the Battles for Chattanooga in November 1863 proved a major blow to the Confederacy. On November 29, 1864, a series of raids by Confederate bushwhacker John P. Gatewood in Polk County resulted in at least 16 deaths.[1]

The East Tennessee Power Company, later the Tennessee Electric Power Company (TEPCO), constructed two hydroelectric dams on the Ocoee River, Ocoee Dams 1 and 2, which were completed in 1911 and 1913, respectively.[4]

TEPCO was later purchased by the Tennessee Valley Authority (TVA), founded in the late 190s. It constructed an additional dam on this river, Ocoee Dam No. 3, completed in 1943, as well as the powerhouse for Apalachia Dam on the Hiwassee River in northern Polk County, which was also completed in 1943.[5]

In 1973, a large music festival known as the "Midwest Monster Peace Jubilee and Music Festival", commonly known as the "Monster Peace Jubilee", was planned by Indiana-based promoter C.F. Manifest Inc. to take place on a 1,300-acre farm north of Benton on Labor Day of that year. The farm was owned by the county executive. (It has been redeveloped as the Chilhowee Gliderport.) Nicknamed "Polkstock" due to its resemblance to 1969's Woodstock in Bethel, New York, the event was expected to attract approximately 500,000 people. Locals strongly opposed it, especially members of the religious communities, who believed the festival would bring much of the perceived rock music culture. The festival was eventually halted by the state circuit court, on the request of the district attorney, who said that the festival would constitute a public nuisance, due to drug, health, and traffic problems.[6]

On May 27, 1983, a massive explosion at a secret illegal fireworks factory killed eleven workers. The operation, located on a bait farm a few miles south of Benton, was unlicensed. It produced M-80 and M-100 fireworks, both illegal, and was the largest illegal fireworks operation in the United States to date.[7]

The Ocoee Whitewater Center was the site of the canoe slalom events for the 1996 Summer Olympics, based in Atlanta, Georgia.

In April 2019, Polk County was the first county in Tennessee to become a "gun sanctuary", or Second Amendment sanctuary.[8]

Most of the terrain of Polk County is mountainous, constituting part of the southern Blue Ridge Mountains, among the southern Appalachian Mountains. The western edge of the county is part of the Ridge-and-Valley Appalachians, which comprise about one-sixth of the county's land area. The Copper Basin is located in the extreme southeastern part of Polk County. Big Frog Mountain, at an elevation of 4,224 ft (1,287 m), is the county's highest point; west of Big Frog Mountain there is no higher point until the Black Hills of South Dakota or the Guadalupe Mountains of Texas. About 80% of the land area of Polk County is now part of the Cherokee National Forest, covering most of the Blue Ridge portion of the county except for the Copper Basin and other small tracts. Most of the Ridge-and-Valley portion of the county is privately owned.

The Ocoee River, site of whitewater slalom events in the Atlanta 1996 Summer Olympic Games, runs through Polk County and is vital to one of the county's major industries, whitewater rafting. The calmer Hiwassee River, a tributary of the Tennessee River which flows through northern Polk County, is also used for rafting and tubing. The Conasauga River, the only river in Tennessee that is not part of the Mississippi River Basin, is located in southwestern Polk County.[10] Most of the population of Polk County lives in the Ridge-and-Valley western portion of the county and the Copper Basin.

View from the Ocoee Scenic Byway 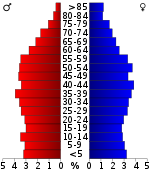 For most of its history, the mines in the Copper Basin were the largest source of employment in Polk County.[18] As the copper mining industry began to decline, tourism associated with the Ocoee and Hiwassee Rivers began to overtake the copper mines as the largest industry in the county.[19] The first rafting company on the Hiwassee was established in 1969.[20] The shutdown of Ocoee Dam No. 2 to repair the flume line in September 1976 first made possible the rafting of the river's rapids, and several rafting companies were established during this time up until 1983, when the reconstruction was complete.[21] Before the reconstruction project was complete, a struggle ensued between TVA and the rafting companies over usage of the river, which culminated in a 1984 agreement with TVA to schedule periodic releases of water through the dam at certain times of the year to allow for whitewater rafting. This agreement, set to expire in 2019, was renewed in 2017.[22] During the same time, commercial rafting of the Hiwassee also greatly increased. Today, tourism associated with rafting, kayaking, and canoeing the Hiwassee and Ocoee Rivers is the largest sector of Polk County's economy, drawing more than 250,000 people to the area annually.[23] The Ocoee River is now the most rafted river in the United States, with about 250,000 visitors annually,[24] and more than 100,000 people raft the Hiwaseee River each year.[20] Both rivers are ranked as two of the most visited tourist attractions in Tennessee.[25] 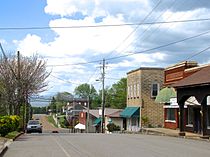 Like East Tennessee, Polk has always leaned Republican, though to a lesser extent than most counties in the region. However, during the Great Depression and World War II, this changed drastically, with Polk County giving 92.7% of the vote to Franklin D. Roosevelt in 1944 (it swung hard to the right between 1944 and 1948). Today, Polk County is very conservative, giving nearly 80% of its popular vote to Donald Trump in 2016- although it did support Bill Clinton (D-AR) twice.

Polk County is served by Martin Campbell Field, a general aviation airport.[28] The Chilhowee Gliderport is an FAA-licensed gliderport located near Benton.[29]

Retrieved from "http://en.turkcewiki.org/w/index.php?title=Polk_County,_Tennessee&oldid=1083461838"
This website is a mirror of Wikipedia, and is not affiliated with the Wikimedia Foundation.
Categories:
Hidden categories: