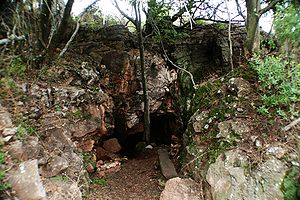 A view of the cave entrance to the internal deposits at Plovers Lake.

Plovers Lake had two periods of excavation. One in the late 1980s and early 1990s by C.K. "Bob" Brain and Francis Thackeray of the then Transvaal Museum (now known as the Northern Flagship Institute) in what is known as the "Outer Deposits", and the second by Lee Berger of the University of the Witwatersrand and Steve Churchill of Duke University in 2000 – 2004 in the "Inner Deposits".[2] 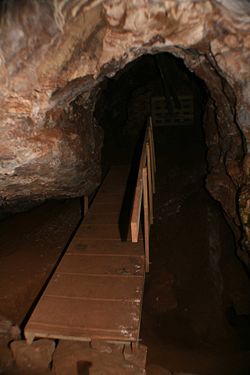 A view of the internal deposits and walkway at Plovers Lake.

Many thousands of fossils were found by both teams. In the Outer Deposits, Brain and Thakeray discovered a very fine fossil baboon that had survived a leopard or saber-toothed cat attack as was evidenced by a healed wound over the eye. They also discovered many other animals and some indeterminate stone tools. No hominid fossils were discovered.

Berger and Churchill worked in the Inner Deposits, and quickly discovered that this site was younger than the Outer Deposits and contained the remains of Middle Stone Aged occupation by humans. They recovered over 25,000 fossil remains, many hundreds of tools including knives and spear points and fragmentary hominid remains dated to around 70,000 years ago.[3]

Plovers Lake is a large series of deposits formed along huge fissures in a checkerboard pattern. The Outer Deposit is a breccia-filled dolomitic cave that has been de-roofed. The Inner Deposits have most of the roof intact and extend for several hundred meters. Most of the site has not been excavated.

Retrieved from "http://en.turkcewiki.org/w/index.php?title=Plovers_Lake&oldid=999905832"
This website is a mirror of Wikipedia, and is not affiliated with the Wikimedia Foundation.
Categories:
Hidden categories: