Pisgah (פִּסְגָּה) is a Biblical Hebrew word with several meanings: it can be used to describe someone’s best achievement; another meaning is the highest point of a mountain. Some translators of the Bible book of Deuteronomy translated the word as a name of a mountain in general, usually referring to Mount Nebo. Lastly, Pisgah also means “summit”.

American forestry has roots in what is now the Pisgah National Forest. The Cradle of Forestry, (Biltmore Forest School), located in the southern part of the forest, was the site of the first school of forestry in the United States. It operated during the late 19th and early 20th centuries. The school was opened and operated at the direction of George Washington Vanderbilt II, builder of the Biltmore Estate in Asheville. The Forestry Education offered at Biltmore was taught by Carl Schenk. A native German, Schenk was referred to Vanderbilt when Gifford Pinchot resigned to operate the newly formed Division of Forestry. The Cradle of Forestry and the Biltmore Estate played a major role in the birth of the U.S. Forest Service. Today these lands are part of an educational and recreational area in Pisgah National Forest.[6]

Located on the forest property is the Bent Creek Campus of the Appalachian Forest Experiment Station, listed on the National Register of Historic Places in 1993.[7]

The Pisgah National Forest is divided into 3 Ranger Districts: the Grandfather, Appalachian, and Pisgah districts. The Grandfather and Appalachian Ranger Districts lie in the northern mountains of North Carolina and include areas such as the Linville Gorge Wilderness, Wilson Creek, the watersheds of the Toe and Cane rivers, Roan Mountain, Mount Mitchell, Craggy Gardens, and the Big Ivy/Coleman Boundary area. The Appalachian Ranger District stretches along the Tennessee border from the Great Smoky Mountains National Park north to Hot Springs.[citation needed] The Appalachian Trail passes through this section of this National Forest. 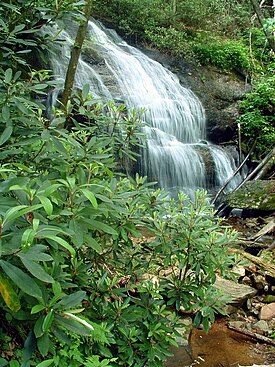 The forest also includes tracts surrounding the city of Asheville, the city of Brevard and land in the French Broad River Valley. Recreation includes activities such as hiking, backpacking, and mountain biking. The land and its resources are also used for hunting, wildlife management, and timber harvesting, as well as the North Carolina Arboretum. The forest lies in parts of 12 counties in western North Carolina. In descending order they are Transylvania, McDowell, Haywood, Madison, Caldwell, Burke, Yancey, Buncombe, Avery, Mitchell, Henderson, and Watauga counties.

Bent Creek, Mills River, and Davidson River - three major streams and tributaries of the French Broad River - are located in the Pisgah Ranger District, which lies on either side of the Blue Ridge Parkway south of Asheville, along the Pisgah Ridge and Balsam Mountains. Three long-distance recreational trails - the Mountains-to-Sea Trail, the Shut-In Trail, and the Art Loeb Trail travel through this district. Also included in the Pisgah Ranger District are the Shining Rock and Middle Prong Wildernesses. The Blue Ridge Parkway transects this National Forest, and many National Forest and Parkway trails intersect.[10]

There are three officially designated wilderness areas lying within Pisgah National Forest that are part of the National Wilderness Preservation System.

Wikimedia Commons has media related to Pisgah National Forest.
Retrieved from "http://en.turkcewiki.org/w/index.php?title=Pisgah_National_Forest&oldid=1115172119"
This website is a mirror of Wikipedia, and is not affiliated with the Wikimedia Foundation.
Categories:
Hidden categories: