(Redirected from Pig sticking)
Jump to navigation Jump to search 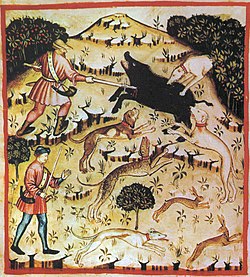 A 14th-century depiction of boar hunting with hounds

Boar hunting is the practice of hunting wild boar, feral pigs, warthogs, and peccaries. Boar hunting was historically a dangerous exercise due to the tusked animal's ambush tactics as well as its thick hide and dense bones rendering them difficult to kill with premodern weapons. 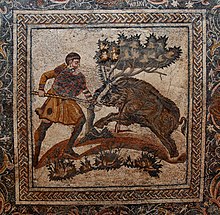 The wild boar (Sus scrofa) is the ancestral species of the domestic pig. It is native across much of Central Europe, the Mediterranean Region (including North Africa's Atlas Mountains) and much of Asia as far south as Indonesia, and has been widely introduced elsewhere.

Wild boar are hunted both for their meat, and to mitigate foraging damage to crops and forests. 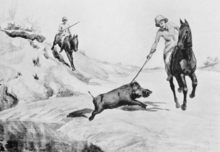 Pigsticking from horseback in India

Pigsticking is a form of boar hunting done by individuals, or groups of spearmen on foot or on horseback using a specialized boar spear. The boar spear was sometimes fitted with a cross guard to stop the enraged animal driving its pierced body further down the shaft in order to attack its killer before dying.

In India, pigsticking was popular among the Jatts, Gujjars, Rajputs, Sikhs, Maharajas, RajGond Rajas and with British officers during Victorian and Edwardian times.[1] According to the Encyclopædia Britannica Eleventh Edition (1910-1911), it was encouraged by military authorities as good training because "a startled or angry wild boar is ... a desperate fighter [and therefore] the pig-sticker must possess a good eye, a steady hand, a firm seat, a cool head and a courageous heart."

Robert Baden-Powell, founder of the Scouting movement wrote a book on the subject.[2] In Lessons from the Varsity of Life he says that, "I never took the usual leave to the hills in hot weather because I could not tear myself away from the sport." To those who condemned it, he said "Try it before you judge. See how the horse enjoys it, see how the boar himself, mad with rage, rushes wholeheartedly into the scrap, see how you, with your temper thoroughly roused, enjoy the opportunity of wreaking it to the full. Yes, hog-hunting is a brutal sport—and yet I loved it, as I loved also the fine old fellow I fought against." Michael Rosenthal quotes him as saying "Not only is pig-sticking the most exciting and enjoyable sport for both the man and horse as well, but I really believe that the boar enjoys it too."[3]

In Persia aristocratic hunters used elephants to chase the boars and encircle them in marshland. The hunter would then use a bow to shoot the boars from a boat. Elephants carried the bodies to the hunting camp. The rock reliefs of these scenes have remained largely intact in Taq-e Bostan.[citation needed]

Sport with Dogs.–"How the Wild Boar is hunted by means of Dogs." Facsimile of a miniature in the manuscript of the Livre du Roy Modus (14th century). Depicts mounted hunters and catch dogs. 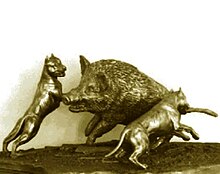 It is not unusual for hunters to hunt with bay and catch dogs together. The bay dogs are used to find the boar and corner it. Once the boar is cornered or turns to fight, the catch dogs are released to seize the boar and hold it down.

Trapping hogs is also a well-used technique for hunting and controlling feral hogs. Numerous types of traps exist and include designs such as the "Figure 6" or "heart" trap which are pen traps usually constructed with hog panels and T-Posts. Box traps, which are usually metal box frames with hog panel sides, top, and bottom along with a trap door that is activated once the pig is inside the box and feeding. Snares are also used successfully as a trap for feral hogs. Hogs are usually caught either by the foot or neck and held in place until the hunter arrives.

Scholarship recognizes the boar hunting as an example of martial prowess in the Ancient World, but also involves the death of a male hero, sometimes connected to a goddess.[5][6]

In ancient Greek culture, the boar represented death, due to its hunting season beginning on 23 September, the near end of the year. The boar was also seen as a representation of darkness battling against light, due to its dark colouration and nocturnal habits. Boar hunts appear frequently in Ancient Greek mythology and literature. The first recorded mention of a boar hunt in Europe occurs in 700 BC in Homer's rendition of the hunt for the Calydonian boar. In Homer's Odyssey, Odysseus was injured on the leg during a boar hunt as a boy. The scar on his leg is what leads Eurycleia to recognise him on his return to Ithaca. In the legend of Prince Adonis, the titular character goes on a boar hunt, only to be killed by his quarry. The third labour of Heracles involved the live capture of the Erymanthian Boar. According to the legend of the founding of Ephesus, the city was built upon the ground where a boar was killed by Prince Androclos.[7]

The ancient Romans left behind many more representations of boar hunting than the Ancient Greeks in both literature and art. Hunting became popular among young Romans starting from the third century BC. Hunting was seen as a way of fortifying character and exercising physical vigour. The boar was known as aper, feri sues or singularis on account of the animals supposedly solitary habits. According to Pliny the Elder, Fulvius Lippinus was the first Roman to create a reserve for wild boar, where he would breed them for hunting in his land in Tarquinia. His methods would be imitated by Lucius Lucullus and Quintus Ortenzius.[7]

An archeological find from Mérida, Spain, dated to the fifth to third centuries BCE, depicts a male youth upon a horse, carrying a spear or javelin; he is accompanied by a hound and hunts a boar. This object, named Carro Votivo de Mérida ("The Votive Cart of Mérida"), seems to represent Greek prince Meleager in an episode of the myth of Calydonian Boar hunt, although there is no consensus on this matter.[8][9]

The Germanic tribes responsible for the sack of Rome were avid hunters, though unlike the Greeks and Romans, they considered the deer and not the boar as the most noble quarry.[7]

Unlike the Romans for whom hunting boar was considered a simple pastime, the hunting of boars in Medieval Europe was mostly done by nobles for the purpose of honing martial skill. It was traditional for the noble to dismount his horse once the boar was cornered and to finish it with a dagger. To increase the challenge, some hunters would commence their sport at the boars mating season, when the animals were more aggressive. Records show that wild boar were abundant in medieval Europe. This is corroborated by documents from noble families and the clergy demanding tribute from commoners in the form of boar carcasses or body parts. In 1015 for example, the doge Ottone Orseolo demanded for himself and his successors the head and feet of every boar killed in his area of influence.[7] 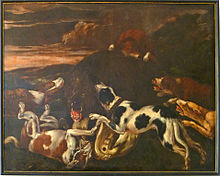 The Renaissance period saw a dramatic reduction of forests for agriculture, thus diminishing some boar populations. Boars were increasingly hunted as crop predators by the rich, who rather than using spears, daggers and arrows, now had firearms allowing them to kill boars far more quickly and efficiently. The reduction in boar numbers resulted in the formation of hunting reserves.[7]

The civil unrest following the end of the French Revolution put an end to feudal privileges and hunting was liberalised, leading to a decrease in boar populations.[7] 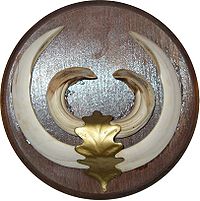 In the modern era, boar hunting is also referred to as hog hunting or pig hunting. Adult hogs have very few predators and thrive once established in an area.[10][citation needed]

An annual boar hunting competition is held in the Australian town of Jambin, Queensland which is considered to be the country's largest such event.[11][12] The three-day competition attracts hundreds of competitors who compete for prizes while attempting to cull the wild boar population in an effort to protect local farming land.[11] The event is also a fundraiser for local schools.[13][14]

In the United States there are herds established across the country. In the US, some states such as California, require hunters to purchase a hunting tag, but there is no limit on the numbers of animals that may be taken, unlike the limits on other game species such as deer and bear.[15]

Retrieved from "http://en.turkcewiki.org/w/index.php?title=Boar_hunting&oldid=1095575225#Pigsticking"
This website is a mirror of Wikipedia, and is not affiliated with the Wikimedia Foundation.
Categories:
Hidden categories: