He established the Wildfowl & Wetlands Trust in Slimbridge in 1946 and helped found the World Wide Fund for Nature, the logo of which he designed. He was a yachting enthusiast from an early age, and took up gliding seriously in mid-life. He was part of the UK team for the 1936 Summer Olympics and won a bronze medal in the sailing event. He was knighted in 1973 for his work in conservation of wild animals and was also a recipient of the WWF Gold Medal[1] and the J. Paul Getty Prize.

Scott was born in London at 174, Buckingham Palace Road, the only child of Antarctic explorer Robert Falcon Scott and sculptor Kathleen Bruce. He was only two years old when his father died. Robert Scott, in a last letter to his wife, advised her to "make the boy interested in natural history if you can; it is better than games."[2][3] He was named after Sir Clements Markham, mentor of Scott's polar expeditions, and a godfather along with J. M. Barrie, creator of Peter Pan.[4]

His mother Lady Scott remarried in 1922. Her second husband Hilton Young (later Lord Kennet) became stepfather to Peter. In 1923, a half brother Wayland Young was born.

Scott was educated at Oundle School and Trinity College, Cambridge, initially reading Natural Sciences but graduating in the History of Art in 1931. Whilst at Cambridge he shared digs with John Berry and the two shared many views.[5] As a student he was also an active member of the Cambridge University Cruising Club, sailing against Oxford in the 1929 and 1930 Varsity Matches. He studied art at the State Academy in Munich[6] for a year followed by studies at the Royal Academy Schools, London.[7] One of the few non-wildlife paintings that he produced during his career, 'Dinghies Racing on Lake Ontario',[8] is held by the Cambridge University Cruising Club.

Like his mother, he displayed a strong artistic talent and he became known as a painter of wildlife, particularly birds; he had his first exhibition in London in 1933. His wealthy background allowed him to follow his interests in art, wildlife and many sports, including wildfowling, sailing, gliding and ice skating. He represented Great Britain and Northern Ireland at sailing in the 1936 Berlin Olympic Games, winning a bronze medal[9] in the olympic class monotype mixed (O-Jolle dinghy).[10] He also participated in the Prince of Wales Cup in 1938 during which he and his crew on the Thunder and Lightning dinghy designed a modified wearable harness (now known as a trapeze) that helped them win.[11] 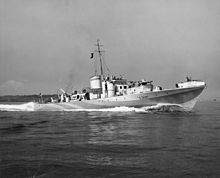 During the Second World War, Scott served in the Royal Navy Volunteer Reserve. As a Sub-Lieutenant, during the failed evacuation of the 51st Highland Division he was the British Naval officer sent ashore at Saint-Valery-en-Caux in the early hours of 11 June 1940 to evacuate some of the wounded. This was the last evacuation of British troops from the port area of St Valery that was not disrupted by enemy fire.[12] 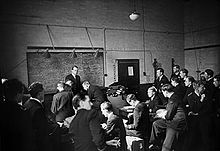 Then he served in destroyers in the North Atlantic but later moved to commanding the First (and only) Squadron of Steam Gun Boats against German E-boats in the English Channel.[13]

Scott is credited with designing the Western Approaches ship camouflage scheme, which disguised the look of ship superstructure. In July 1940, he managed to get the destroyer HMS Broke (D83) in which he was serving experimentally camouflaged, differently on the two sides. To starboard, the ship was painted blue-grey all over, but with white in naturally shadowed areas as countershading, following the ideas of Abbott Handerson Thayer from the First World War. To port, the ship was painted in "bright pale colours" to combine some disruption of shape with the ability to fade out during the night, again with shadowed areas painted white. However, he later wrote that compromise was fatal to camouflage, and that invisibility at night (by painting ships in white or other pale colours) had to be the sole objective.

By May 1941, all ships in the Western Approaches (the North Atlantic) were ordered to be painted in Scott's camouflage scheme. The scheme was said to be so effective that several British ships including HMS Broke collided with each other. The effectiveness of Scott's and Thayer's ideas was demonstrated experimentally by the Leamington Camouflage Centre in 1941. Under a cloudy overcast sky, the tests showed that a white ship could approach six miles (9.6 km) closer than a black-painted ship before being seen.[14] 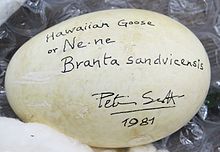 Scott stood as a Conservative in the 1945 general election in Wembley North and narrowly failed to be elected. In 1946, he founded the organisation with which he was ever afterwards closely associated, the Severn Wildfowl Trust (now the Wildfowl and Wetlands Trust) with its headquarters at Slimbridge in Gloucestershire. There, through a captive breeding programme, he saved the nene or Hawaiian goose from extinction in the 1950s. In the years that followed, he led ornithological expeditions worldwide, and became a television personality, popularising the study of wildfowl and wetlands.[citation needed]

His BBC natural history series, Look, ran from 1955 to 1969 and made him a household name. It included the first BBC natural history film to be shown in colour, The Private Life of the Kingfisher (1968), which he narrated.[15] He wrote and illustrated several books on the subject, including his autobiography, The Eye of the Wind (1961). In the 1950s, he also appeared regularly on BBC radio's Children's Hour, in the series, "Nature Parliament".[citation needed]

Scott took up gliding in 1956 and became a British champion in 1963. He was chairman of the British Gliding Association (BGA) for two years from 1968[16] and was president of the Bristol & Gloucestershire Gliding Club. He was responsible for involving Prince Philip in gliding.[citation needed]

He was the subject of This Is Your Life in 1956 when he was surprised by Eamonn Andrews at the King's Theatre, Hammersmith, London.[17] 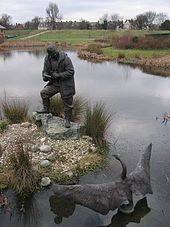 As a member of the Species Survival Commission of the International Union for Conservation of Nature, he helped create the Red Data books, the group's lists of endangered species.[18]

Scott was the founder President of the Society of Wildlife Artists and President of the Nature in Art Trust[19] (a role in which his wife Philippa succeeded him).[19] Scott tutored numerous artists including Paul Karslake.

Scott continued with his love of sailing, skippering the 12-metre yacht Sovereign in the 1964 challenge for the America's Cup which was held by the United States. Sovereign suffered a whitewash 4–0 defeat in a one-sided competition where the American boat was of a noticeably faster design. From 1955 to 1969 he was the president of The International Yacht Racing Union (now World Sailing).[21]

He was one of the founders of the World Wide Fund for Nature (formerly called the World Wildlife Fund), and designed its panda logo. His pioneering work in conservation also contributed greatly to the shift in policy of the International Whaling Commission and signing of the Antarctic Treaty, the latter inspired by his visit to his father's base on Ross Island in Antarctica.[citation needed]

Scott was a long-time Vice-President of the British Naturalists' Association, whose Peter Scott Memorial Award was instituted after his death, to commemorate his achievements.[22]

In 1962, he co-founded the Loch Ness Phenomena Investigation Bureau with the then Conservative MP David James, who had previously been Polar Adviser on the 1948 film based on his late father's polar expedition Scott of the Antarctic.[24] In 1975 Scott proposed the scientific name of Nessiteras rhombopteryx for the Loch Ness Monster (based on a blurred underwater photograph of a supposed fin) so that it could be registered as an endangered species.[25] The name was based on the Ancient Greek for "the monster of Ness with the diamond shaped fin", but it was later pointed out by The Daily Telegraph to be an anagram of "Monster hoax by Sir Peter S". Nessie researcher Robert H. Rines, who took two supposed pictures of the monster in the 1970s, responded by pointing out that the letters could also be read as an anagram for, "Yes, both pix are monsters, R."[26]

In June 2004, Scott and Sir David Attenborough were jointly profiled in the second of a three-part BBC Two series, The Way We Went Wild, about television wildlife presenters and were described as being largely responsible for the way that the British and much of the world views wildlife.

In 1996 Scott's life and work in wildlife conservation was celebrated in a major BBC Natural World documentary, produced by Andrew Cooper and narrated by Sir David Attenborough. Filmed across three continents from Hawaii to the Russian arctic, In the Eye of the Wind was the BBC Natural History Unit's tribute to Scott and the organisation he founded, the Wildfowl and Wetland Trust, on its 50th anniversary.

Scott's life was also the subject of a BBC Four documentary called Peter Scott – A Passion for Nature produced in 2006 by Available Light Productions (Bristol).[27]

In 1951, Scott married his assistant, Philippa Talbot-Ponsonby,[29] while on an expedition to Iceland in search of the breeding grounds of the pink-footed goose. A daughter, Dafila, was born later in the same year (dafila is the old scientific name for a pintail). She, too, became an artist, painting birds.[30] A son, Falcon, was born in 1954.[31]

On 8 July 1941, it was announced that Scott had been mentioned in despatches "for good services in rescuing survivors from a burning Vessel" while serving on HMS Broke.[32] On 2 October 1942, it was announced that he had been further mentioned in despatches "for gallantry, daring and skill in the combined attack on Dieppe".[33] On 1 June 1943, he was awarded the Distinguished Service Cross (DSC) "for skill and gallantry in action with enemy light forces".[34]

Scotts' wrasse, Cirrhilabrus scottorum was named after Scott and his wife for their “great contribution in nature conservation".[39]

The Peter Scott Walk[40][41] passes the mouth of the River Nene and follows the old sea bank along The Wash, from Peter Scott's lighthouse near Sutton Bridge in Lincolnshire to the ferry crossing at King's Lynn.

A Sir Peter Scott National Park is located in central Jamnagar, in Gujarat, India. Jamnagar also has a Sir Peter Scott Bird Hospital. These institutions in Jamnagar were founded as a result of the friendship between Peter Scott and Jam Sahib, the Indian ruler of Jamnagar at the time.

Retrieved from "http://en.turkcewiki.org/w/index.php?title=Peter_Scott&oldid=1028792597"
This website is a mirror of Wikipedia, and is not affiliated with the Wikimedia Foundation.
Categories:
Hidden categories: