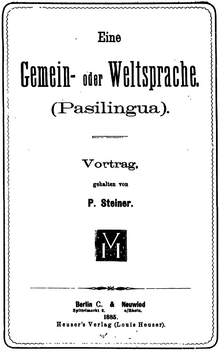 The cover of the first edition of Pasilingua

Pasilingua is an international auxiliary language proposed by Paul Steiner, first published in Neuwied in 1885 (although some sources claim that the year was 1886) in his book Three World Language Systems (German: Drei Weltsprach-Systeme).

For a time, Pasilingua was regarded as a serious competition to Volapük, but never got much support. However, Frederick Bodmer lauded the project and its author for its inclusion of pidgin elements; it was quoted by Louis Couturat and Leopold Leau, in their Histoire de la langue universelle, and in books of various other interlinguists at the beginning of the 20th century.

The language was based on English, with influences from French and German. Its radicals had natural appearance, without much deformation, but the derivation was not natural, as it was possible to radically change the appearance of word; however, word families were formed regularly.

In spite of its name, the language is not a pasigraphy because it is not an a priori language, but a posteriori/natural one, almost a euroclone.

The alphabet has 31 letters:

There are also two digraphs: ch and sch. The words are pronounced like in German.

There is no stress.

The definite article is to (masculine), te (feminine), ta (neuter);

The articles agree with the noun in number and case. There are four cases in a single conjugation; case can be indicated on the article - to (nominative), tode (genitive), toby (dative) and ton (accusative) - or on the noun.

Nouns have four cases and three genders; all form plural by adding -s.

Gender endings are: masculine in -o; feminine in -e and neuter in either -a (concrete) or -u (abstract). For example, to homino (the man), te femine (the woman), ta cita (the city), ta modestiu (the modesty).

The four cases are nominative, genitive, dative and accusative, like in German.

Each conjugation has three tenses:

The majority of the vocabulary was based on English, French, German and Latin; particles were generally based on the former. A lot of words had two synonyms, Germanic and Romance - for example bono and guto mean "good" and Deo and Gotto mean "God".

Numbers from one to ten:

Quota hora er al? - What o'clock [=time] is it?
Ubi habitiris tüs? - Where do you live?
Annóncius ers pro tos affäriros qua ta vapora pro ta industriu. - Advertisements are to the man of business what steam is to industry.

Retrieved from "http://en.turkcewiki.org/w/index.php?title=Pasilingua&oldid=1018081549"
This website is a mirror of Wikipedia, and is not affiliated with the Wikimedia Foundation.
Categories:
Hidden categories: