Particulate pollution is pollution of an environment that consists of particles suspended in some medium. There are three primary forms: atmospheric particulate matter,[1] marine debris,[2] and space debris.[3] Some particles are released directly from a specific source, while others form in chemical reactions in the atmosphere. Particulate pollution can be derived from either natural sources or anthropogenic processes. 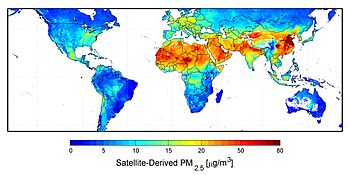 Some particulates occur naturally, originating from volcanoes, dust storms, forest and grassland fires, living vegetation and sea spray. Human activities, such as the burning of fossil fuels in vehicles,[5] wood burning,[6][7][8][9][7][10] stubble burning, power plants, road dust, wet cooling towers in cooling systems and various industrial processes, also generate significant amounts of particulates. Coal combustion in developing countries is the primary method for heating homes and supplying energy. Because salt spray over the oceans is the overwhelmingly most common form of particulate in the atmosphere, anthropogenic aerosols—those made by human activities—currently account for about 10 percent of the total mass of aerosols in our atmosphere.[11]

In the United Kingdom domestic combustion is the largest single source of PM2.5 annually.[12][13] In some towns and cities in New South Wales wood smoke may be responsible for 60% of fine particle air pollution in the winter.[14]

Marine debris and marine aerosols refer to particulates suspended in a liquid, usually water on the Earth's surface. Particulates in water are a kind of water pollution measured as total suspended solids, a water quality measurement listed as a conventional pollutant in the U.S. Clean Water Act, a water quality law.[15] Notably, some of the same kinds of particles can be suspended both in air and water, and pollutants specifically may be carried in the air and deposited in water, or fall to the ground as acid rain.[16] The majority of marine aerosols are created through the bubble bursting of breaking waves and capillary action on the ocean surface due to the stress exerted from surface winds.[2] Among common marine aerosols, pure sea salt aerosols are the major component of marine aerosols with an annual global emission between 2,000-10,000 teragrams annually.[2] Through interactions with water, many marine aerosols help to scatter light, and aid in cloud condensation and ice nuclei (IN); thus, affecting the atmospheric radiation budget.[2] When they interact with anthropogenic pollution, marine aerosols can affect biogeochemical cycles through the depletion of acids such as nitric acid and halogens.[2]

Space debris describes particulates in the vacuum of outer space, specifically particles originating from human activity that remain in geocentric orbit around the Earth. The International Association of Astronauts define space debris as "any man-made Earth orbiting object which is non-functional with no reasonable expectation of assuming or resuming its intended function or any other function for which it is or can be expected to be authorized, including fragments and parts thereof".[3]

Space debris is classified by size and operational purpose, and divided into four main subsets: inactive payloads, operational debris, fragmentation debris and microparticulate matter.[3] Inactive payloads refer to any launched space objects that have lost the capability to reconnect to its corresponding space operator; thus, preventing a return to Earth.[17] In contrast, operational debris describes the matter associated with the propulsion of a larger entity into space, which may include upper rocket stages and ejected nose cones.[17] Fragmentation debris refers to any object in space that has become dissociated from a larger entity by means of explosion, collision or deterioration.[18] Microparticulate matter describes space matter that typically cannot be seen singly with the naked eye, including particles, gases, and spaceglow.[17]

Particulate pollution is observed around the globe in varying sizes and compositions and is the focus of many epidemiological studies. Particulate matter (PM) is generally classified into two main size categories: PM10 and PM2.5. PM10, also known as coarse particulate matter, consists of particles 10 micrometers (μm) and smaller, while PM2.5, also called fine particulate matter, consists of particles 2.5 μm and smaller.[21] Particles 2.5 μm or smaller in size are especially notable as they can be inhaled into the lower respiratory system, and with enough exposure, absorbed into the bloodstream. Particulate pollution can occur directly or indirectly from a number of sources including, but not limited to: agriculture, automobiles, construction, forest fires, chemical pollutants, and power plants.[22]

Exposure to particulates of any size and composition may occur acutely over a short duration, or chronically over a long duration.[23] Particulate exposure has been associated with adverse respiratory symptoms ranging from irritation of the airways, aggravated asthma, coughing, and difficulty breathing from acute exposure to symptoms such as irregular heartbeat, lung cancer, kidney disease, chronic bronchitis, and premature death in individuals who suffer from pre-existing cardiovascular or lung diseases due to chronic exposure.[21] The severity of health effects generally depends upon the size of the particles as well as the health status of the individual exposed; older adults, children, pregnant women, and immunocompromised populations are at the greatest risk for adverse health outcomes.[24] Short-term exposure to particulate pollution has been linked to adverse health impacts.[25][26]

As a result, the US Environmental Protection Agency (EPA) and various health agencies around the world have established thresholds for concentrations of PM2.5 and PM10 that are determined to be acceptable. However, there is no known safe level of exposure and thus, any exposure to particulate pollution is likely to increase an individual's risk of adverse health effects.[27] In European countries, air quality at or above 10 micrograms per cubic meter of air (μg/m3) for PM2.5 increases the all-causes daily mortality rate by 0.2-0.6% and the cardiopulmonary mortality rate by 6-13%.[27]

Worldwide, PM10 concentrations of 70μg/m3 and PM2.5 concentrations of 35μg/m3 have been shown to increase long-term mortality by 15%.[21] More so, approximately 4.2 million of all premature deaths observed in 2016 occurred due to airborne particulate pollution, 91% of which occurred in countries with low to middle socioeconomic status. Of these premature deaths, 58% were attributed to strokes and ischaemic heart diseases, 8% attributed to COPD (Chronic Obstructive Pulmonary Disease), and 6% to lung cancer.[28]

In 2006, the EPA conducted air quality designations in all 50 states, denoting areas of high pollution based on criteria such as air quality monitoring data, recommendations submitted by the states, and other technical information; and reduced the National Ambient Air Quality Standard for daily exposure to particulates in the 2.5 micrometers and smaller category from 15μg/m3 to 12μg/m3 in 2012.[29] As a result, U.S. annual PM2.5 averages have decreased from 13.5 µg/m3 to 8.02 µg/m3, between 2000 and 2017.[30]

Retrieved from "http://en.turkcewiki.org/w/index.php?title=Particulate_pollution&oldid=1020986360"
This website is a mirror of Wikipedia, and is not affiliated with the Wikimedia Foundation.
Categories:
Hidden categories: