Jump to navigation Jump to search
For other uses, see Palio (disambiguation).

Palio is the name given in Italy to an annual athletic contest, very often of a historical character, pitting the neighbourhoods of a town or the hamlets of a comune against each other. Typically, they are fought in costume and commemorate some event or tradition of the Middle Ages and thus often involve horse racing, archery, jousting, crossbow shooting, and similar medieval sports. Once purely a matter of local rivalries, many have now become events that are staged with an eye to visitors and foreign tourists. 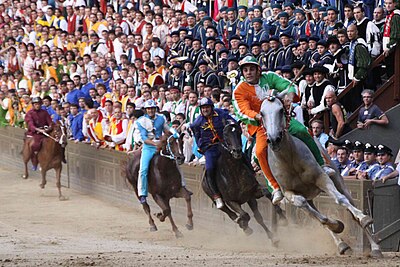 The Palio di Siena is the only one that has been run without interruption since it started in the 1630s and is definitely the most famous all over the world. Its historical origins are documented since 1239 even though the version seen today was the final evolution of races held from the second half of the 16th century. In 1935, Italian Prime Minister Benito Mussolini sent out an official declaration that only the one of Siena could bring the designation of Palio. All other horse races held in various parts of Italy are actually just modern reenactments. After the Second World War, nevertheless, many other palios arose throughout the various regions of Italy, which could be considered just attempts of imitation of the Palio di Siena. Here is an incomplete list:

Wikimedia Commons has media related to Palios.
Retrieved from "http://en.turkcewiki.org/w/index.php?title=Palio&oldid=1103152358"
This website is a mirror of Wikipedia, and is not affiliated with the Wikimedia Foundation.
Categories:
Hidden categories: