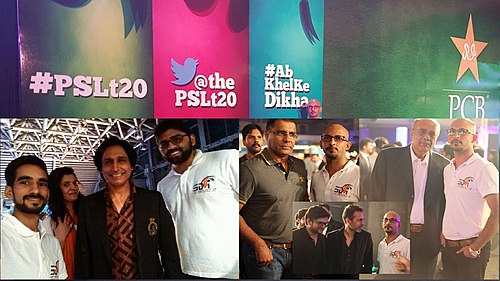 The opening ceremony of PSL season 1 in 2016 was held on 4 February 2016 at 7:00 pm and ended at 8:00 pm. It was held at Dubai International Cricket Stadium before the first match between Islamabad United and Quetta Gladiators.[2][3]

The ceremony ended with a firework display.[7] 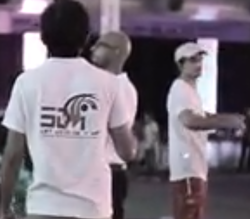 Zafar at the ceremony

The closing ceremony was also held at Dubai International Cricket Stadium on 23 February 2016.[8]

The opening ceremony of the PSL's second season was held on 9 February 2017 at the Dubai International Cricket Stadium. Defending champions Islamabad United entered in shalwar kameez. Over 26,000 people attended the ceremony in the stadium.[9] According to a source of Samaa TV, Justin Bieber was also invited but no confirmation was made.[10][11]

Sheikh Mubarak bin Zayed al Nahyan, the United Arab Emirates' (UAE) Minister of Culture, went on stage and praised the efforts and contributions of Pakistanis in helping the UAE. He said that the PSL testifies the strong bond between both countries.[17] He was thanked by the PCB[definition needed] chairman for hosting the event.

Najam Sethi invited Misbah-ul-Haq and captains of other teams to come on stage and sign the bat as a donation to the Edhi Foundation.[12] The ceremony ended with a firework display.[18]

The closing ceremony was held at Gaddafi Stadium in Lahore on 5 March 2017.[19] It was hosted by Ayesha Omer and Ahmed Ali Butt. Nearly 30,000 spectators attended the ceremony. Pakistan army paratroopers demonstrated their skills at the ceremony as a tribute to the martyrs of Pakistan.[20]

Zafar announced that he would not perform in the ceremony, but he later changed his mind and performed "Ab Khel Jamay Ga".[21][22]

The ceremony started at 7:00 pm and concluded at 10:00 pm.[26] It was hosted at Dubai International Cricket Stadium on 22 February 2018, following the match between Multan Sultans and Peshawar Zalmi.[27] Artists including Jason Derulo, Abida Parveen, Zafar and Roy were among the performers.[28] Hareem Farooq and Bilal Ashraf hosted the ceremony.[29][30] The ceremony also featured the Pakistani Sachal Orchestra and a firework display.[31] A teaser of Zafar's Pakistani film Teefa in Trouble was also shown. Ali Zafar started the opening ceremony with his performance, after which all the teams entered the stadium.[32]

At the end, Zafar sang "Dil Se Jaan Laga De" and "Rockstar". Rameez Raja introduced the expansion franchise in the league, Multan Sultans.[33] Sethi said that the finals would be held in Karachi and that all matches would eventually be held in Pakistan.[34]

After ceremony, a match was played between Peshawar Zalmi and Multan Sultans, the latter of whom won. 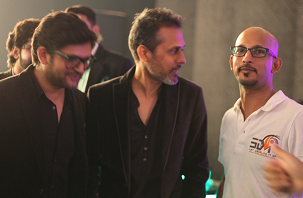 The members of Strings band at the ceremony.

The closing ceremony took place at National Stadium, Karachi, on 25 March 2018 at 6:00 pm, followed by the final match played by Islamabad United and Peshawar Zalmi.[37] The presenter of the ceremony was Bilal Ashraf. The performers include Zafar, Roy, Strings band, Aima Baig and Farhan Saeed. A crowd of 33,000 people were present in the stadium.[38][39][40][41][42] 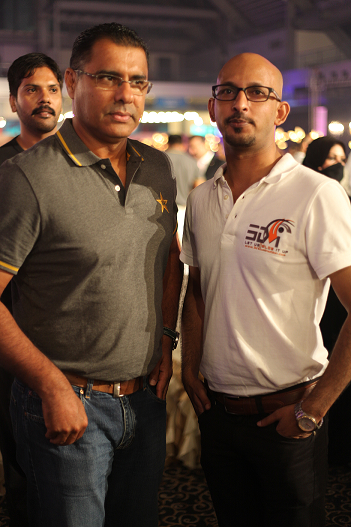 The opening ceremony was held on 14 February at 8:00 pm at Dubai International Cricket Stadium, prior to the first match of the season between Lahore Qalandars and Islamabad United.[44][45][46][47] The ceremony started with "Ishy Bilady" and "Qaumi Taranah". The hosts of ceremony were Rameez Raja and Zainab Abbas.[48][49] Nahyan bin Mubarak Al Nahyan, chairman of Emirates Cricket Board wished all teams and players and congratulated PCB. Later, Ehsan Mani thanked UAE government and welcomed everyone.[50]

The ceremony featured a marching band, which performed the band Europe's song, "The Final Countdown". Marcia Barrett from Boney M. performed "Daddy Cool" from the band. Aima Baig and Shuja Haider performed their rendition of Nazia Hassan and Zoheb Hassan's "Disco Deewane"; Zoheb Hassan stated it was done without his permission and tweeted that he would take legal action.[51][52] Junoon sang "Yaar Bina", "Heerey" and "Jazba-e-Junoon". The last performance was the title anthem of the league's fourth season by Khan featuring Young Desi titled "Khel Deewano Ka". Then, a medley of Zafar's previous anthems for PSL was played and followed by the fireworks.[53][54][55]

American rapper Pitbull was supposed to perform at the ceremony, but he withdrew due to a technical fault in his plane's engine.[56][57]

The closing ceremony of the league was held at National Stadium, Karachi at 6:00 pm on 17 March 2019, before the league's final match between Peshawar Zalmi and Quetta Gladiators. The host of ceremony was Fakhar-e-Alam.[58][59][60] A one-minute silence was also observed in respect of the martyrs and victims of the Christchurch mosque shootings in New Zealand. Nearly 32,000 spectators were present in the stadium.[61][62][63] 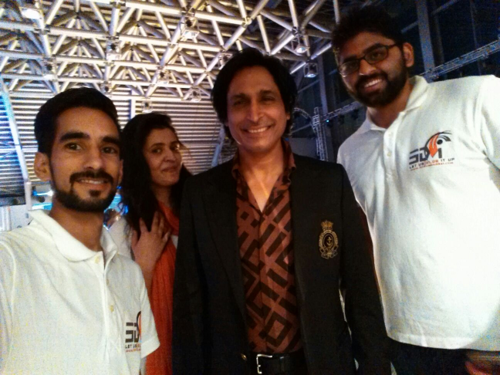 Ramiz Raja at the ceremony.

The opening ceremony was held on 20 February 2020 at 6:45 pm at National Stadium in Karachi, prior to the first match of the league that was played between Quetta Gladiators and Islamabad United.[66][67][68]

The show began with the national anthem of Pakistan. Afterwards, a drummers and trumpeters group performed an instrumental version of official anthem of PSL 2020 titled "Tayyar Hain". It was followed by a Sufi medley that featured singers Sanam Marvi, qawwals Abu Mohammad and Fareed Ayaz, and the band Soch. Other singers appeared at the ceremony, including Sajjad Ali, who sang his 90s hits "Babia" and "Sohni Lagdi"; Baig, who performed "Dhola" at the ceremony;[69] Abrar-ul-Haq; and Rahat Fateh Ali Khan. The ceremony concluded with Ali Azmat, Arif Lohar, Haroon Rashid and Asim Azhar's performance of PSL 2020's anthem "Tayyar Hain", which was accompanied by fireworks in the background.[70] Nearly 350 artists performed at the ceremony.[71] Ahmed Godil hosted the ceremony whose style appeared to mimic Imran Khan,[72] and was replaced with Fakhar-e-Alam. Godil revealed in a show at Samaa TV that his mother could not sleep the entire night due to memes of him and criticized the ceremony for being poorly managed.[73][74]

The closing ceremony of the league was scheduled to be held on 22 March 2020 in Lahore, but the ceremony, play-offs, and finals were postponed due to the COVID-19 pandemic. The ceremony was rescheduled for 17 November 2020 at National Stadium, Karachi, but was cancelled as there were no spectators in the stadium as a precaution against the pandemic.[76][77]

The ceremony was recorded in Istanbul, Turkey, and telecasted.[78] The artist lineup included Atif Aslam, Imran Khan, and Humaima Malik, aside of the performers of the official anthem of PSL 6, "Groove Mera" – Baig, Naseebo Lal and Young Stunners.[79]

PCB CEO Wasim Khan had also confirmed Zafar's appearance at the show, but the latter denied it.[80]

Retrieved from "http://en.turkcewiki.org/w/index.php?title=Pakistan_Super_League_opening_and_closing_ceremonies&oldid=1059023004"
This website is a mirror of Wikipedia, and is not affiliated with the Wikimedia Foundation.
Categories:
Hidden categories: