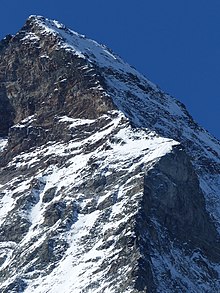 Matterhorn Hörnligrat - although a serious alpine route in its own right, the Hörnli ridge of the Matterhorn is the normal route that the majority of climbers use to reach the summit of this mountain.[1]

A normal route or normal way (French: voie normale; German: Normalweg) is the most frequently used route for ascending and descending a mountain peak. It is usually the simplest route.[2][3]

In the Alps, routes are classed in the following ways, based on their waymarking, construction and upkeep:

Sometimes the normal route is not the easiest ascent to the summit, but just the one that is most used. There may be technically easier variations. This is especially the case on the Watzmannfrau, the Hochkalter and also Mount Everest. There may be many reasons these easier options are less well-used:

The term tourist route may sometimes be applied (irrespective of the level of difficulty of ascent) by those wishing to suggest that other routes up a mountain are somehow more "worthy". This belittling of the "normal route" therefore maintains a distinction between those perceiving themselves as serious mountaineers who disparage the incursion of tourist climbers into their domain (hence the term the "Yak Route" on Mount Everest).[4]

Retrieved from "http://en.turkcewiki.org/w/index.php?title=Normal_route&oldid=1026453842"
This website is a mirror of Wikipedia, and is not affiliated with the Wikimedia Foundation.
Categories:
Hidden categories: