New Pelion Hut is the largest alpine hut in the Cradle Mountain-Lake St Clair National Park in the Central Highlands of Tasmania, Australia

It was built in 2001. It sleeps up to 60 people, in six separate rooms, and has a large common area that can be divided in two by a roller door. It is heated by a small gas heater that runs for 45-minute intervals. New Pelion Hut is located approximately halfway along the Overland Track, approximately 100 m from the Douglas Creek, and is a popular base for several day walks. Even though the hut is relatively new, it suffers from condensation. It is recommended that some of the windows are to left ajar.

New Pelion Hut has similar facilities to most of the other huts on the Overland Track. These include:

New Pelion Hut is primarily accessed on foot. There is a helipad located next to the hut, however this is mainly used for maintenance and emergencies. There are three maintained walking tracks to access New Pelion Hut: 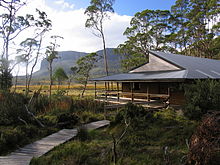 View of Mount Oakleigh from the New Pelion Hut

There are a number of mountains that can be accessed from New Pelion Hut. These include:

Retrieved from "http://en.turkcewiki.org/w/index.php?title=New_Pelion_Hut&oldid=994407815"
This website is a mirror of Wikipedia, and is not affiliated with the Wikimedia Foundation.
Categories:
Hidden categories: