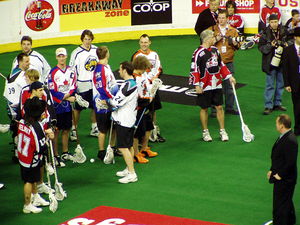 All Stars during the skills competition, 2005, Calgary

Team Canada defeated Team USA, by a score of 25-24 in overtime at the Blue Cross Arena, in Rochester, New York. The All-Stars were placed into their respective teams by their nationality. 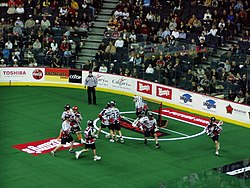 Action during 2005 All Star Game

The 2005 NLL All Star Game was played on February 26, 2005, in the Pengrowth Saddledome, the home of the Calgary Roughnecks. For the first time ever, the game was on US national broadcast TV – on NBC. The NLL moved the date of the game from February 27 to February 26 to accommodate NBC's schedule. The East Division defeated the West in overtime 11-10 in front of 11,569 fans at Pengrowth Saddledome. John Tavares of Buffalo scored the winning goal. Tracey Kelusky of Calgary was named Most Valuable Player of the game. After the game, there was a youth USA vs. Canada lacrosse game and an NLL All-Star skills competition.

Lewis Ratcliff, a forward for the Calgary Roughnecks, was the MVP of the game. He scored 4 goals, one of which was the game winner with only 4.4 seconds left in the game.

The 2007 NLL All Star Game was played in Portland, Oregon, at the Rose Garden Arena on March 10, 2007. The East beat the West 20-16. Mark Steenhuis of the Buffalo Bandits was named game MVP with six goals, marking the first time an NLL player has been named All-Star Game MVP twice. Steenhuis also won the award in 2004.[1]

The 2008 All-Star Game was held at Rexall Place in Edmonton on March 16, 2008. The East division All-Stars defeated the West division 17-16 in overtime, as Shawn Williams scored the winner 31 seconds into OT. Philadelphia Wings' transition player Geoff Snider was named MVP.[2]

No All-Star game has been held since the 2012 season.

Retrieved from "http://en.turkcewiki.org/w/index.php?title=National_Lacrosse_League_All-Star_Game&oldid=1055151290"
This website is a mirror of Wikipedia, and is not affiliated with the Wikimedia Foundation.
Categories:
Hidden categories: