The Museum of Broken Relationships (Croatian: Muzej prekinutih veza) is a museum in Zagreb, Croatia, dedicated to failed love relationships. Its exhibits include personal objects left over from former lovers, accompanied by brief descriptions.

The "museum" began as a traveling collection of donated items. Since then, it has found a permanent location in Zagreb. It received the Kenneth Hudson Award for Europe's most innovative museum in 2011.[3]

The museum was founded by two Zagreb-based artists, Olinka Vištica, a film producer, and Dražen Grubišić, a sculptor.[4] After their four-year love relationship came to an end in 2003, the two joked about setting up a museum to house the left-over personal items.[5] Three years later, Grubišić contacted Vištica with this idea, this time in earnest.[5] They started asking their friends to donate objects left behind from their break-ups, and the collection was born.[5] It was shown to the public for the first time in 2006, in Glyptotheque Zagreb, as a part of the 41st Zagreb Salon.[6] 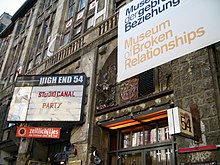 The Museum of Broken Relationships, hosted by the Kunsthaus Tacheles, was a hit with Berlin museumgoers in 2007.[7]

In the years that followed, the collection went on a world tour, visiting Argentina, Bosnia and Herzegovina, Germany, Macedonia, the Philippines, Serbia, Singapore, Slovenia, South Africa, Turkey, the United Kingdom, and the United States.[7][8][9][10] Between 2006 and 2010, the collection was seen by more than 200,000 visitors.[11] Along the way, it gathered new items donated by members of the public; more than 30 objects were donated by Berliners alone during the exhibition in that city in 2007.[7]

In the meantime, after unsuccessful attempts to interest the Croatian Ministry of Culture in finding a temporary location for the museum, Vištica and Grubišić decided to make a private investment and rent a 300-square-meter (3,200 sq ft) space in Zagreb's Upper Town, making it the city's first privately owned museum.[12] The museum, finally opened in October 2010, proved popular with foreign tourists in particular, not only due to its original subject matter, but also the fact that it is open seven days a week, unlike other museums in the city.[13][14] 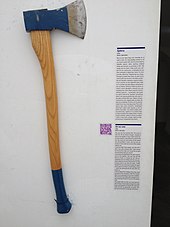 This exhibit, labeled "ex-axe", was donated by a woman from Berlin. She used it to chop her former lover's furniture in frustration after being left for another woman: "two weeks after she left, she came back for the furniture. It was neatly arranged into small heaps and fragments of wood. She took that trash and left my apartment for good. The axe was promoted to a therapy instrument".

In May 2011, the Museum of Broken Relationships received the Kenneth Hudson Award, given out by the European Museum Forum (EMF).[15] The award goes to "a museum, person, project or group of people who have demonstrated the most unusual, daring and, perhaps, controversial achievement that challenges common perceptions of the role of museums in society", rating the "importance of public quality and innovation as fundamental elements of a successful museum".[15] The EMF's judging panel noted:[15]

The Museum of Broken Relationships encourages discussion and reflection not only on the fragility of human relationships but also on the political, social, and cultural circumstances surrounding the stories being told. The museum respects the audience's capacity for understanding wider historical, social issues inherent to different cultures and identities and provides a catharsis for donors on a more personal level.

The Museum of Broken Relationships is described by its founders as an "art concept which proceeds from the (scientific) assumption that objects (in the broadest sense, i.e., matter as a whole) possess integrated fields—‘holograms’ of memories and emotions—and intends with its layout to create a space of ‘secure memory’ or ‘protected remembrance’ in order to preserve the material and nonmaterial heritage of broken relationships".[16]

The project is divided into several segments:[16]

Until now, the Museum of Broken Relationships has been on tour in the following cities:

Museum of Broken Relationships in L.A.[edit]

Since 2016 the Museum of Broken Relationships can be found in two cities; the original one is located at the Upper Town in Zagreb, Croatia, while the newly founded one was located in Los Angeles, USA.

During his stay in Zagreb, famous American lawyer John B. Quinn visited the Museum of Broken Relationships, and he liked it so much that he decided to start a cooperation with the founders of the Museum. The Museum of Broken Relationships in Los Angeles opened its doors to the public on June 4, 2016 and was located in the heart of Hollywood, with Alexis Hyde as the Director.[19] The size of the venue is around a thousand square meters, and most of the items included in the museum come from the collection initiated in Los Angeles, while a smaller portion of the items were from the Zagreb collection. The Los Angeles location is closed as of November 2017 while looking for a new location.[20]

Wikimedia Commons has media related to Museum of Broken Relationships.
Retrieved from "http://en.turkcewiki.org/w/index.php?title=Museum_of_Broken_Relationships&oldid=1096162174"
This website is a mirror of Wikipedia, and is not affiliated with the Wikimedia Foundation.
Categories:
Hidden categories: