Looking southwest from Mt. Cammerer; the two peaks in the distance are Luftee Knob (left) and Mt. Guyot (right). 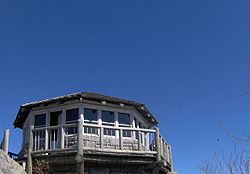 The lookout atop Mt. Cammerer 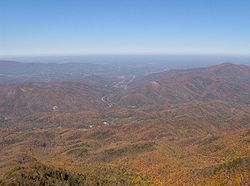 Mount Cammerer is a mountain on the northeastern fringe of the Great Smoky Mountains, in the Southeastern United States. The mountain is situated on the state line between Cocke County, Tennessee and Haywood County, North Carolina. The Appalachian Trail traverses Cammerer's south slope and a restored fire lookout at the summit offers panoramic views of the eastern Smokies, Cocke County, and the Blue Ridge Mountains.

Although a narrow ridge connects Mt. Cammerer to a nearby higher knob, leaving Cammerer with a very low topographic prominence, the mountain is clearly visible not only from the surrounding mountains, but from various points in the town of Cosby and along I-40 as it crosses Cocke County. Mt. Cammerer is a popular hiking destination, especially in Autumn, when the leaves of the trees in the forest around the mountain blaze red, orange and yellow for as far as the eye can see.

One of Cammerer's key characteristics is the outcropping of contorted quartzite rock at the summit.[6]

Mount Cammerer was named for Arno B. Cammerer, Director of the National Park Service (1933–1940) and an instrumental figure in establishing a national park in the Great Smoky Mountains. Before its renaming, Mt. Cammerer was known as "White Rock," referring to the bright white rocks that burst through the treeline at the summit.[7] On some North Carolina maps, Mt. Cammerer is called "Sharptop".[8] At least one story tells of a lightning blast that cut a hole in the summit, leaving a pool of water that attracted ravens.[6]

Throughout the late-19th century and early 20th-century, moonshining was rampant in the area around Mt. Cammerer, as what was then a virgin wilderness provided the perfect cover for the illegal stills. Most residents in the area, however, were law-abiding mountain farmers, as described in local resident Mary Bell Smith's In the Shadow of the White Rock. Ella Costner, designated by the state of Tennessee as the "poet laureate of the Smokies," was born in the area of what is today the Cosby Campground, at the base of Mt. Cammerer. In 1934, the Civilian Conservation Corps built a camp at the base of the mountain, and constructed most of the trails and overlooks in the area.[9]

The lookout at the summit of Mt. Cammerer was built by the CCC in 1937, using nearby rock and timber (other materials had to be hauled up the mountain). The tower was manned by a fire ranger until the 1960s, after which it fell into disrepair before being restored in 1996.[10] 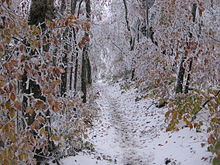 Multiple hiking trails, horse trails, and walkways intersect at the Cosby Campground, which can lead to confusion. From the parking lot (near the campground), one path leads east to the Lower Mount Cammerer Trail. To reach the Low Gap Trail, simply follow the path parallel to Cosby Creek. Both trails are marked.

Hiking in the Great Smoky Mountains, more specifically Mount Cammerer, can be hazardous. Early season snowfalls are not uncommon. Always check the weather before making any hiking plans.

Wikimedia Commons has media related to Mount Cammerer.
Retrieved from "http://en.turkcewiki.org/w/index.php?title=Mount_Cammerer&oldid=970239975"
This website is a mirror of Wikipedia, and is not affiliated with the Wikimedia Foundation.
Categories:
Hidden categories: