The Royal Highest Princess Mooryati Soedibyo of Surakarta Sunanate, also known as Hj. DR. BRA. Mooryati Soedibyo, S.S., M. Hum. (born January 5, 1928), is a member of the Surakarta Sunanate royal family in Indonesia, president director of Mustika Ratu [id], and the Vice Chairman II of the People's Consultative Assembly of the Republic of Indonesia (term of office: October 1, 2004 - October 1, 2009), and the national director for Puteri Indonesia, which sends contestants to Miss Universe, Miss International and Miss Supranational.[1] She's also ranked number 7 on the list of the 99 most influential women in Indonesia 2007 by the Globe Asia magazine.[2] Mooryati Soedibyo was recorded by MURI-Indonesian World Records Museum as the winner of the oldest doctorate in Indonesia, and as "Empu Jamu".[3][4] 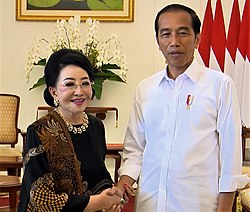 A member of a Javanese royal family, she was born in Surakarta, Central Java and grew up in the palace of Surakarta Sunanate. She learned about herbal medicine and traditional Javanese cosmetics from her grandmother; the traditional knowledge preserved by the royal family is considered to be superior to that known by the common people.[5] Soedibyo received a bachelor's degree in English literature from the Indonesia Open University, a master's degree in English literature from the Sebelas Maret University and a PhD in strategic management from the School of Economics at the University of Indonesia.[6] In 1956, she married Soedibyo Purbo Hadiningrat.[5]

In 1973, the hobby of drinking herbal medicine Mooryati Soedibyo, which had been done since she was young, finally developed as a business. The concoction of the recipe for Surakarta Sunanate, which was originally given to his friends, turned into a business. 800 products were exported to approximately 20 countries, including Russia, the Netherlands, Japan, South Africa, the Middle East, Malaysia and Brunei.[citation needed]

Soedibyo founded the cosmetics company Mustika Ratu in 1975.[8] The company also operates its own spa resorts.[5] In 2002, she was named Entrepreneur of the Year by Ernst & Young Indonesia,[6]

She has served as a member of the Regional Representative Council and as a member[9] and vice chairperson of the People's Consultative Assembly.[10]

In 1990, Soedibyo acquired the license for the Puteri Indonesia beauty pageant and established herself as the national director.[10]

In 2016, she published an autobiography Menerobos Tradisi Memasuki Dunia Baru, The Untold Story.[11]

Retrieved from "http://en.turkcewiki.org/w/index.php?title=Mooryati_Soedibyo&oldid=1049575601"
This website is a mirror of Wikipedia, and is not affiliated with the Wikimedia Foundation.
Categories:
Hidden categories: