Monroe County is a county on the eastern border of the U.S. state of Tennessee. As of the 2010 census, the population was 44,519.[2] Its county seat is Madisonville.[3]

During the early part of the 18th century, this area was known as part of the traditional homelands of the Cherokee Nation. They had established towns and villages extending through much of the mountainous areas of western Virginia, the Carolinas, southeastern Tennessee, and portions of northeastern Georgia and Alabama. English colonists and European Americans tended to refer to these areas by geography: Lower Towns, along the upper Savannah River in South Carolina; Middle Towns in Western North Carolina west of the French Broad River; and the Overhill Towns, located generally along the west side of the Appalachian Mountains in present-day Tennessee, along the lower Little Tennessee River and upper Tennessee River; down into northeastern Georgia. Later the Cherokee expanded into western Georgia and what developed as Alabama.

The Overhill Towns had developed along the Little Tennessee and Tellico rivers throughout present-day Monroe County, Tennessee. These included Chota, Tanasi (the name source of "Tennessee"), and Great Tellico, which at various times were each considered the Cherokee principal town or "mother town". Also in this area were Citico, Toqua, Tomotley, Mialoquo, Chilhowee and Tallassee.[4]

Archaeological excavations at the Citico site suggest the area was inhabited for thousands of years before the arrival of European settlers. Artifacts uncovered from the Icehouse Bottom site near Vonore date to as early as 7500 B.C., during the Archaic period.[5] Later prehistoric occupants were from indigenous cultures, such as the Woodland era and Southern Appalachia Mississippian culture, that preceded the rise of the historic Cherokee people. The latter group are believed to have migrated south from the Great Lakes area approximately in 1000 CE or later.

They spoke an Iroquoian language, and most other Iroquoian tribes have historically occupied areas around the Great Lakes, including the powerful Five Nations of the Iroquois League, or Haudenosaunee, then based in present-day New York and Pennsylvania. The Tuscarora people of the Carolinas also spoke an Iroquoian language, and are believed to have come South. Following the disasters of the Yamasee War in the early 1700s, they decided to leave and migrated north, declaring the tribal migration complete in 1722 and settling near the Oneida people in western New York. 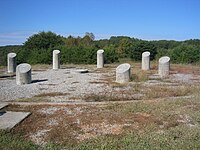 In 1756, during the French and Indian War (the North American front of the Seven Years' War), the British established Fort Loudoun on the Little Tennessee River near its confluence with the Tellico River, as part of an agreement with the Cherokee to gain support of their warriors. After relations soured between the British and Cherokee in 1760, when South Carolina authorities killed several Cherokee chiefs held prisoner in the colony, the Cherokee laid siege to Fort Loudoun. They killed two dozen of its garrison after their surrender in August 1760, and took many survivors captive for ransom.[6] The British retaliated, attacking the Cherokee Lower Towns and Middle Towns in the Carolinas.

Monroe County was established in 1819 after the signing of the Calhoun Treaty, in which the Cherokee ceded to the United States claims to lands stretching from the Little Tennessee River south to the Hiwassee River. The county was named for President James Monroe.[1] The Cherokee migrated south and west deeper into Georgia and Alabama.

Some of the state's first gold mines were located in Monroe County. In the early 1830s, placer mining was conducted on Coker Creek (near Tellico Plains).[1]

Monroe County was one of the few East Tennessee counties to support secession at the outbreak of the American Civil War; others in the area supported the Union. On June 8, 1861, the county voted in favor of Tennessee's Ordinance of Secession by a margin of 1,096 to 774.[7]

In the early 20th century, the Babcock Lumber Company conducted extensive logging operations in the Tellico Plains area. During the same period, the Aluminum Company of America began building a string of dams along the Little Tennessee, among them Calderwood, Santeetlah, and Cheoah, to harness water power for its aluminum smelting operations in nearby Alcoa.

After a construction program for flood control and generating hydroelectric power beginning in the 190s, the Tennessee Valley Authority planned construction in the 1960s of its last major project: Tellico Dam, completed in 1979. It was intended for flood control, the generation of hydroelectric power, and recreation related to creation of the manmade, large Tellico Reservoir. This water body flooded the lower 33 miles of the Little Tennessee River. Although the project had been opposed by many residents in the county, where several communities had to be abandoned and landowners relocated before the flooding, others supported the project. In the environmental analysis, the project was found to threaten an endangered species. The snail darter controversy delayed completion of the dam for some time.[1] 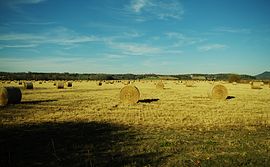 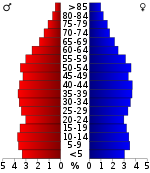 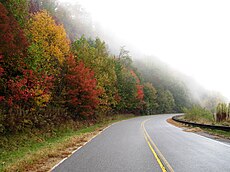 A portion of the county is included in the Cherokee National Forest. The Monroe section of the forest includes two federally designated wilderness areas— Citico Creek and Bald River Gorge. The Joyce Kilmer Memorial Forest is located just across the North Carolina border to the east. The Great Smoky Mountains National Park is located just across the Blount County border to the northeast.

The Cherohala Skyway, a national scenic byway, connects Tellico Plains with Robbinsville, North Carolina. Crossing the Unicoi Mountains, the road peaks at an elevation of over 5,000 feet.

Fort Loudoun State Park is located on a peninsula near Vonore, and includes a replica of the 18th-century colonial Fort Loudoun. The Tellico Blockhouse site lies across the river to the north from Fort Loudoun. The layout of the 1790s-era blockhouse is marked by stones and posts. The Sequoyah Museum, dedicated to the Cherokee scholar who independently created a syllabary, a writing system for his language, is located near Fort Loudoun.

The Lost Sea is a commercially operated cave located 7 miles southeast of Sweetwater in Monroe County. The lake was discovered by Ben Sands in 1905 when he was 13 years old. The underground lake for which it is named is the largest in North America. Today the cave tour features a ride on the lake in boats with electric motors. In 1940, fossilized skeletons and footprints of two Pleistocene jaguars (Panthera onca augusta) were discovered in the cave. They were excavated by George Gaylord Simpson of the American Museum of Natural History.[20] 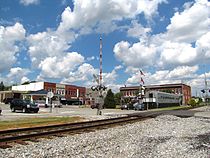 Retrieved from "http://en.turkcewiki.org/w/index.php?title=Monroe_County,_Tennessee&oldid=1065675241"
This website is a mirror of Wikipedia, and is not affiliated with the Wikimedia Foundation.
Categories:
Hidden categories: