Jump to navigation Jump to search
Class of decorative elements in the ornamentation
For other uses, see Molding (process) and Mold (cooking implement).

Moulding (spelled molding in the United States), or coving (in United Kingdom, Australia), is a strip of material with various profiles used to cover transitions between surfaces or for decoration. It is traditionally made from solid milled wood or plaster, but may be of plastic or reformed wood. In classical architecture and sculpture, the moulding is often carved in marble or other stones. 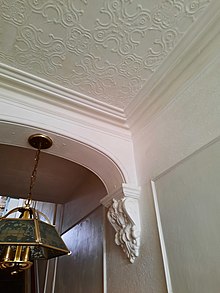 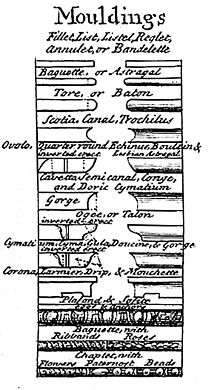 Moldings from 1728 Table of architecture in the Cyclopedia[1]

At their simplest, mouldings hide and help weather seal natural joints produced in the framing process of building a structure. As decorative elements, they are a means of applying light- and dark-shaded stripes to a structural object without having to change the material or apply pigments. Depending on their function they may be primarily a means of hiding or weather-sealing a joint, purely decorative, or some combination of the three.

As decorative elements the contrast of dark and light areas gives definition to the object. If a vertical wall is lit at an angle of about 45 degrees above the wall (for example, by the sun) then adding a small overhanging horizontal moulding, called a fillet moulding, will introduce a dark horizontal shadow below it. Adding a vertical fillet to a horizontal surface will create a light vertical shadow. Graded shadows are possible by using mouldings in different shapes: the concave cavetto moulding produces a horizontal shadow that is darker at the top and lighter at the bottom; an ovolo (convex) moulding makes a shadow that is lighter at the top and darker at the bottom. Other varieties of concave moulding are the scotia and congé and other convex mouldings the echinus, the torus and the astragal.

Placing an ovolo directly above a cavetto forms a smooth s-shaped curve with vertical ends that is called an ogee or cyma reversa moulding. Its shadow appears as a band light at the top and bottom but dark in the interior. Similarly, a cavetto above an ovolo forms an s with horizontal ends, called a cyma or cyma recta. Its shadow shows two dark bands with a light interior.

Together the basic elements and their variants form a decorative vocabulary that can be assembled and rearranged in endless combinations. This vocabulary is at the core of both classical architecture and Gothic architecture.

When practiced in the Classical tradition the combination and arrangement of mouldings are primarily done according to preconceived compositions.[citation needed] Typically, mouldings are rarely improvised by the architect or builder, but rather follows established conventions that define the ratio, geometry, scale, and overall configuration of a moulding course or entablature in proportion to the entire building. Classical mouldings have their roots in ancient civilizations, with examples such the 'cornice cavetto' and 'papyriform columns' appearing in ancient Egyptian architecture,[citation needed] while Greek and Roman practices developed into the highly the regulated classical orders. Necessary to the spread of Classical architecture was the circulation of pattern books, which provided reproducible copies and diagrammatic plans for architects and builders.[citation needed] Works containing sections and ratios of mouldings appear as early as the Roman era with Vitruvius and much later influential publications such as Giacomo Barozzi da Vignola's, Five Orders of Architecture, and James Gibbs's, Rules for Drawing the Several Parts of Architecture. Pattern books can be credited for the regularization and continuity of classical architectural mouldings across countries and continents particularly during the colonial era, contributing to the global occurrence of Classical mouldings and elements.[citation needed] Pattern books remained common currency amongst architects and builders up until the early 20th century, but soon after mostly disappeared as Classical architecture lost favor to Modernist and post-war building practices that conscientiously stripped their buildings of mouldings.[citation needed] However, the study of formalized pattern languages, including mouldings, has since been revived through online resources and the popularity of new classical architecture in the early 21st century.[citation needed]

The middle ages are characterized as a period of decline and erosion in the formal knowledge of Classical architectural principles.[citation needed] This eventually resulted in an amateur and 'malformed' use of moulding patterns that eventually development into the complex and inventive Gothic style.[citation needed] While impressive and seemingly articulate across Europe, Gothic architecture remained mostly regional and no comprehensive pattern books were developed at the time, but instead likely circulated through pilgrimage and the migration of trained Gothic masons.[citation needed] These medieval forms were later imitated by prominent Gothic Revivalists such as Augustus Pugin and Eugène Viollet-le-Duc who formalized Gothic mouldings, developing them into its own systematic pattern books which could be replicated by architects with no native Gothic architecture.

Retrieved from "http://en.turkcewiki.org/w/index.php?title=Molding_(decorative)&oldid=1118758344"
This website is a mirror of Wikipedia, and is not affiliated with the Wikimedia Foundation.
Categories:
Hidden categories: