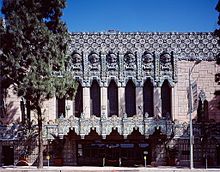 Mayan Revival is a modern architectural style popular in the Americas during the 1920s and 1930s[1] that drew inspiration from the architecture and iconography of pre-Columbian Mesoamerican cultures. 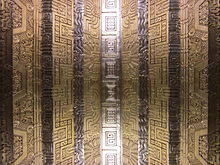 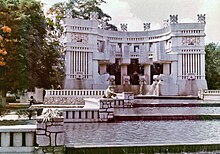 Though the name of the style refers specifically to the Maya civilization of southern Mexico and Central America, in practice, this revivalist style frequently blends Maya architectural and artistic motifs "playful pilferings of the architectural and decorative elements"[2] with those of other Mesoamerican cultures, particularly the Central Mexican Aztec architecture styling from the pre-contact period as exhibited by the Mexica and other Nahua groups. Although there were mutual influences between these original and otherwise distinct and richly varied pre-Columbian artistic traditions, the syncretism of these modern reproductions is often an ahistorical one.

Historian Marjorie Ingle traces the history of this style to the Pan American Union Building by Paul Philippe Cret which incorporates numerous motifs drawn from the indigenous traditions of the Americas.[3] Maya and Mexica elements in the Pan American Union Building include the floor mosaics surrounding a central fountain (most of the motifs are copied directly from sculpture at Copan) and figures on lights flanking the entrance to the building. The building's Art Museum of the Americas contains numerous stoneware architectural details that are copied from Maya and Mexica art.

In the Art Deco period[edit] 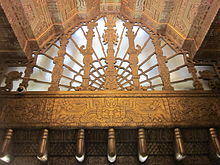 Several prominent architects worked in this style, including Frank Lloyd Wright. Wright's Hollyhock House on Olive Hill in Los Angeles copied the shape of temples from Palenque, and the Imperial Hotel in Tokyo was in the shape of a Mesoamerican pyramid. His Ennis House, Millard House (La Miniatura), Storer House, and Freeman House in Los Angeles are built in his concrete textile block system, with bas reliefs and modular unit construction evoking the geometric patterning on the façades of Uxmal buildings. 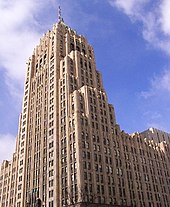 The Fisher Building in Detroit

Wright's disciple Arata Endo constructed the Kōshien Hotel in the 1930s, heavily influenced by the architecture of the Imperial Hotel in Tokyo.

Commissioned in 1953, the massive pyramid of the Beth Sholom Synagogue with its geometric roof detailing is perhaps the most direct Wright evocation of Maya form.

Likely the most publicized example of Mayan Revival was Robert Stacy-Judd's Aztec Hotel of 1924–1925. Its façade, interiors and furniture incorporated abstract patterns inspired by the Maya script with Art Deco influences, and it was built on the original U.S. Route 66 in Monrovia, California.

Stacy-Judd was directly influenced by John Lloyd Stephens writings, and perhaps even more so by the illustrations by Frederick Catherwood as presented in their book Incidents of Travel in Central America, Chiapas and Yucatan,[4] a work that introduced many to the wondrous ruins of Central America. In it Stacy-Judd explains the choice of the name of the hotel: "When the hotel project was first announced, the word Maya was unknown to the layman. The subject of Maya culture was only of archaeological importance, a, at that, concerned but a few exponents. As a word Aztec was fairly well known, I baptized the hotel with that name, although all the decorative motifs are Maya."[5] Although the buildings use of reinforced concrete to create the intricate designs on the exterior one opinionated observer wrote: "The bizarre Aztec forms may create the atmosphere desired, and will serve the legitimate publicity interests of the establishment, but it would be deplorable if an 'Aztec Movement' set in and the style copyists were diverted from noble examples to the forms of a semi-barbaric people."[6]

Other prominent buildings in this style include:

Wikimedia Commons has media related to Mayan Revival architecture.
Retrieved from "http://en.turkcewiki.org/w/index.php?title=Mayan_Revival_architecture&oldid=1100507331"
This website is a mirror of Wikipedia, and is not affiliated with the Wikimedia Foundation.
Categories:
Hidden categories: