Two trails lead to the summit of Mary's Rock. One which starts from the Panorama Visitor Center and the other which starts from the Meadow Spring Parking Area. The trail from Panorama is somewhat longer and steeper, and is generally considered more difficult. It follows the white-blazed Appalachian Trail. The other trail is shorter and somewhat less difficult. The summit of the rock offers views of the northern section of Shenandoah National Park and Page Valley. 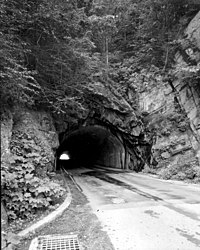 Mary's Rock has its fair share of legends of how the rock was named. One story claims that Francis Thornton wed Mary Savage and brought her up the mountain to show her the lands they would own together. In 2017 the song Mary's Rock, written by Will Hopkins, was recorded by Terry Baucom's Dukes of Drive. The popular bluegrass group had chart success with a version of this story, suggesting Francis Thornton pushed Mary, or Mary slipped and fell off the rock to her untimely death, allowing Thornton to inherit the land. Another legend claims that Thornton had a daughter named Mary, who climbed up the mountain when she was young and came back with a bear cub under her arm. Yet another states that it was named after the wife of William Randolph Barbee.[1]

Marys Rock Tunnel is a 670-foot (200 m) long tunnel blasted through the mountain that Skyline Drive passes through. Constructed in 1932, it is considered one of the engineering feats of Skyline Drive.

Retrieved from "http://en.turkcewiki.org/w/index.php?title=Mary%27s_Rock&oldid=988929320"
This website is a mirror of Wikipedia, and is not affiliated with the Wikimedia Foundation.
Categories: