The last major rebellion of the indigenous Mapuches of Araucanía took place in 1881, during the last phase of the Occupation of Araucanía (1861–1883) by the Chilean state. It was planned by Mapuche chiefs in March 1881 to be launched in November the same year. Mapuche support for the uprising was not unanimous: Some Mapuche factions sided with the Chileans and others declared themselves neutral. The organizers of the uprising did however succeed in involving Mapuche factions that had not previously been at war with Chile. With most of the attacks repelled within a matters of days Chile went on the next years to consolidate its conquests. 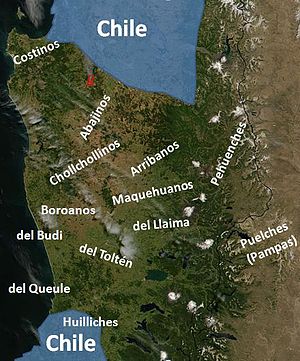 Chilean territory and Mapuche groups in Araucanía in 1860 prior to the occupation of Araucanía.

In the 19th century Chile experienced a fast territorial expansion. Chile established a colony at the Strait of Magellan in 1843, settled Valdivia, Osorno and Llanquihue with German immigrants and conquered land from Peru and Bolivia.[1][2] Later Chile would also annex Easter Island.[3] In this context Araucanía began to be conquered by Chile due to two reasons. First, the Chilean state aimed for territorial continuity[4] and second it remained the sole place for Chilean agriculture to expand.[5]

Between 1861 and 1871 Chile incorporated several Mapuche territories in Araucanía. In January 1881, having decisively defeated Peru in the battles of Chorrillos and Miraflores, Chile resumed the conquest of Araucanía.[6][7][8]

...[Chileans] raped and killed my women and murdered my sons and impaled my women. How is that you Colonel do not want me to take arms when I have been treated this way?

— A Mapuche chief to Gregorio Urrutia after the uprising[12]

In January 1881 the Mapuches of the Malleco zone rose against the Chilean occupation.[9] The town and forts of Traiguén, Lumaco and Collipulli were attacked.[6] In response the Chilean state launched a massive campaign not only to defend forts and settlements but also to push the frontier all the way from Malleco River to Cautín River.[6][7][8] Interior minister Manuel Recabarren was appointed by president Aníbal Pinto to oversee the process from the town of Angol.[7][8] Colonel Gregorio Urrutia was summoned from Chilean-occupied Lima to Araucanía to take charge of the Army of the South.[7]

Recabarren personally led a large column that established the forts of Quillem, Lautaro and Pillalelbún.[13] In this last place Recabarren was approached by local Mapuche chiefs who asked him to not advance beyond Cautín River.[13] Recabarren answered by telling them that the whole territory was being occupied.[13] At the founding of Temuco in the northern shores of Cautín River Recabarren met chief Venacio Coñoepán and other chiefs from Choll-Choll who also asked him to not advance further.[13] On March 28 Gregorio Urrutia founded the town of Victoria at the shores of Traiguén River.[14]

With the Chilean advance to Cautín River a small mountain range called Cadena de Ñielol remained a focus of Mapuche resistance from where warriors launched pillaging raids or attacks against vulnerable targets.[15] To end this activity Gregorio Urrutia established a fort in the range.[15]

Initially Mapuches offered little resistance to Chilean advance to Cautín River.[13] Recabarren believed that Mapuches had not reacted because they expected the foundation of new forts and towns to be preceded by parliaments with Chilean authorities.[13] A wave of Mapuche attacks begun in late February 1881, just a few days after the founding of Temuco in the middle of Mapuche territory.[16] The first major attack was against a caravan of carts carrying injured soldiers from Temuco to Fuerte Ñielol.[16] The whole escort of over 40 soldiers and the 96 injured and sick soldiers were killed.[17] In response to these attacks Gregorio Urrutia launched an attack on the Mapuche warriors of Cadena Ñielol burning in his way over 500 rukas and captured over 800 cattle and horses.[18] On the other side of the Andes Pehuenches assaulted on March the Argentine outpost of Chos Malal killing the whole garrison of 25–30 soldiers.[19]

In mid-March Venacio Coñoepán and other Mapuche chiefs met. In the meeting the establishment of new settlements was rejected and the chiefs decided to go to war.[17] They set 5 November as the date for their uprising.[20] Coñoepán opposed the uprising and according to Gregorio Urrutia he was unaware of date of uprising.[21]

During the uprising several Chilean forts and towns were attacked.

A group of Arribanos attacked by mistake on wrong date, November 3, the fort of Quillem.[20] This attack put on alert all Chilean garrisons in Araucanía, settlers took refuge in the forts.[20] On November 5, 400 Mapuche warriors, allegedly led by Luis Marileo Colipí, attacked the fort of Lumaco.[22][23] After Chilean reinforcements arrived to Lumaco Mapuches retreated, and waited to hear news for the uprising elsewhere.[22][24]

Despite of having remained outside conflicts in the 19th century the Costinos of the northern coast joined the 1881 uprising.[28] Costino warriors, after having contributed to the destruction of Imperial and the engagements at Toltén, advanced north to Arauco.[29] Around Tirúa Costino warriors suffered heavy casualties in two engagements with a group of more than 400 armed settlers and campesinos plus some soldiers.[29]

The most important engagements were held at the fort of Ñielol and Temuco located at the heart of Araucanía. Venacio Coñoepán and 60 of his warriors were granted refuge in the fort of Ñielol as he had opposed the uprising.[21] From there Coñoepán contributed to the defence.[21] The uprising Mapuche succeeded in isolating the fort but were unsuccessful in their attack on November 9.[21] On November 10 a reinforcement of Mapuches coming from Traigén was defeated by Chilean troops and the siege of Ñielol was lifted.[30] After the Mapuche failure at Ñielol Chilean troops and Coñoepáns warriors were sent to Temuco that was still being under siege.[31] Uprising Mapuches numbered 1,400 to 4,000 depending on source.[31] In command of the Chilean forces inside the fort of Temuco was José M. Garzo.[32] The main engagement at Temuco occurred on November 10 when part of the Chilean troops left the fort of Temuco to chase the warriors from Truf Truf and Tromell.[33] The remaining Mapuches unsuccessfully attacked the fort, believing it was almost empty.[33] The defenders used the only cannon in the fort to shoot explosive shells against the attacking Mapuche.[32] About 400 Mapuches were either killed or wounded on November 10 around Temuco.[34]

Uprising Mapuche chiefs were severely punished. When Gregorio Urrutia arrived to Cholchol on November 10 he ordered the construction of a fort in the place of the ruka of chief Ancamilla who had joined the uprising. By doing this Urrutia fulfilled an old vow:[35]

If I, your friend, knows that you Ancamilla are involved in provocations and assaults, I swear I will build a fort above your ruka. If you remain peaceful nobody will touch you

Ancamilla was taken prisoner and sent handcuffed to a dungeon in Poblete.[35] The fort of Cholchol begun to be built on November 22 and gave with time origin to the modern town of Cholchol.[32] The rukas of other revolting chiefs were also razed.[36]

Luis Marileo Colipí who had allegedly attacked Lumaco was stripped of the more than 6,000 ha land he owned near Purén and his brother was taken prisoner and killed.[26] Luis Marileo Colipí managed to escape to Argentina. Little is known about his whereabouts there.[26]

Retrieved from "http://en.turkcewiki.org/w/index.php?title=Mapuche_uprising_of_1881&oldid=1124834626"
This website is a mirror of Wikipedia, and is not affiliated with the Wikimedia Foundation.
Categories:
Hidden categories: