Maggie Valley is a town in Haywood County, North Carolina, United States. The population was 1,150 at the 2010 census.[5] A popular tourist destination, it is home to Cataloochee Ski Area and the former Ghost Town in the Sky amusement park. Maggie Valley is part of the Asheville Metropolitan Statistical Area.

The community gets its name from Maggie Mae Setzer; her father John "Jack" Sidney Setzer founded the area's first post office and named it after one of his daughters.[6]

Before European colonization, what is now Maggie Valley was inhabited by the Cherokee people for centuries. 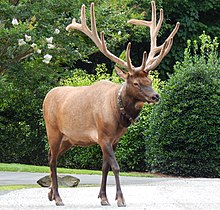 An elk in a Maggie Valley neighborhood.

Elk were copious throughout the United States, but numbers have decreased since the mid-1800s because of overhunting and habitat loss. In 2001, the Rocky Mountain Elk Foundation, the National Park Service and other partners joined together to restore wild elk to the Smoky Mountains in the Cataloochee Valley near Maggie Valley.[9] Most elk are found in Cataloochee Valley, which is a perfect viewing area in the southeastern section of the Great Smoky Mountains National Park. But the elk have been known to wander out of the park and walk toward Maggie Valley. The best times to view elk are in the early morning and late evening.[10]

Not only are there elk around Maggie Valley, but occasionally there are black bears. Bears are found in the Great Smoky Mountains National Park and occasionally in the areas around Maggie Valley.[11] During winter, the black bears are inactive for a short amount of time and exhibit some physiological responses to low food storage and temperatures. But a result of their brief hibernation is that there are more bear sightings. This is risky because they can be looking for food in neighborhoods or killed on roads. Locals strongly suggest never approaching a bear to photograph it, or leaving food or garbage out, and taking in any bird feeders that are not monitored (especially at night).[12]

There were 297 households, of which 16.8% had children under the age of 18 living with them, 52.2% were married couples living together, 6.4% had a female householder with no husband present, and 39.7% were non-families. 33.0% of all households were made up of individuals, and 11.8% had someone living alone who was 65 years of age or older. The average household size was 2.04 and the average family size was 2.56.

Society for the Preservation of Bluegrass Music in America (SPGMA) “Hall of Greats" member Raymond Fairchild. [15]

Elk were reintroduced into the Great Smoky Mountains National Park near Maggie Valley in 2001.[17]

Retrieved from "http://en.turkcewiki.org/w/index.php?title=Maggie_Valley,_North_Carolina&oldid=1100225413"
This website is a mirror of Wikipedia, and is not affiliated with the Wikimedia Foundation.
Categories:
Hidden categories: