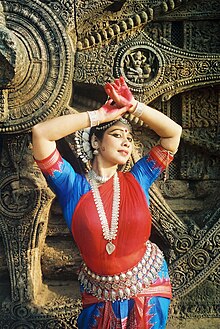 Madhumita Raut in an Odissi pose at Konark Sun Temple

Brought up in Delhi in an atmosphere of dance and music under her father's tutelage, Madhumita Raut received her academic qualifications at the Bharatiya Vidya Bhavan's School and Indraprastha College in Delhi.[2] She holds a master's degree in English literature from Delhi University and a diploma in performing arts.

Madhumita Raut is her father's torch bearer of Mayadhar Raut Gharana of Odissi dance. Her works include compositions on Hungarian poetry, choreographic compositions on poems of Goethe, and fusion dances with Balinese dancer Dia Tantri in the Netherlands. She has effectively used the medium of dance for social causes. She has performed for the Indian Cancer Society, Delhi, WWF(World Wildlife Fund - India), CAPF(Campaign Against Pre-Birth Elimination of Females), The Art of Living and for upliftment of the 'have-nots'.

Madhumita Raut in an Odissi pose at Konark Sun Temple

Netherlands Channel I has made a documentary film on her. Stuttgart (Germany) and the Hungarian televisions have showcased Raut's dance in their documentary films on India. Raut has also done a lead role in a film produced by the Dutch television.

Madhumita Raut wrote "Odissi: What, Why and How: Evolution, Revival and Technique", published by B.R. Rhythms, Delhi in 2007.[4]

Raut has received the following awards:

Retrieved from "http://en.turkcewiki.org/w/index.php?title=Madhumita_Raut&oldid=1033152138"
This website is a mirror of Wikipedia, and is not affiliated with the Wikimedia Foundation.
Categories:
Hidden categories: