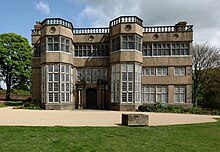 The windows of the long gallery are evident on the top floor at Astley Hall, Chorley. 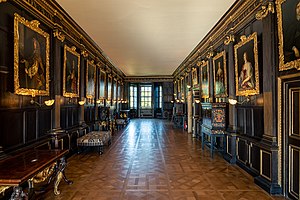 The Long Gallery at Ham House; this only has windows at the ends.

In architecture, a long gallery is a long, narrow room, often with a high ceiling. In Britain, long galleries were popular in Elizabethan and Jacobean houses. They were normally placed on the highest reception floor of English country houses, usually running along a side of the house, with windows on one side and at the ends giving views, and doors to other rooms on the other. They served several purposes: they were used for entertaining guests, for taking exercise in the form of walking when the weather was inclement, for displaying art collections, especially portraits of the family and royalty, and acting as a corridor.

A long gallery has the appearance of a spacious corridor, but it was designed as a room to be used in its own right, not just as a means of passing from one room to another, though many served as this too. In the 16th century, the seemingly obvious concept of the corridor had not been introduced to British domestic architecture; rooms were entered from outside or by passing from one room to another. 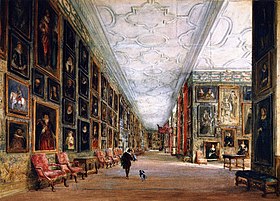 Later, long galleries were built, sometimes in a revivalist spirit, as at Harlaxton Manor, an extravagant early-Victorian house in Jacobean style, and sometimes to house a large art collection, as at Buckingham Palace, which has a long interior space lit from above, called the Picture Gallery. 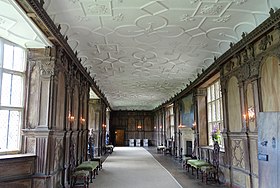 Notable long galleries in the United Kingdom can be seen at:

Retrieved from "http://en.turkcewiki.org/w/index.php?title=Long_gallery&oldid=1128333369"
This website is a mirror of Wikipedia, and is not affiliated with the Wikimedia Foundation.
Categories:
Hidden categories: