This is a list of diplomatic missions in Turkmenistan. At present, the capital city, Ashgabat, hosts 31 embassies and 6 other missions with diplomatic status, including one bilateral mission, two international financial institutions, and three multilateral missions. 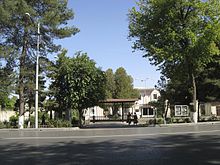 Consular office of the Russian Embassy in Ashgabat

Retrieved from "http://en.turkcewiki.org/w/index.php?title=List_of_diplomatic_missions_in_Turkmenistan&oldid=1026885915"
This website is a mirror of Wikipedia, and is not affiliated with the Wikimedia Foundation.
Categories:
Hidden categories: